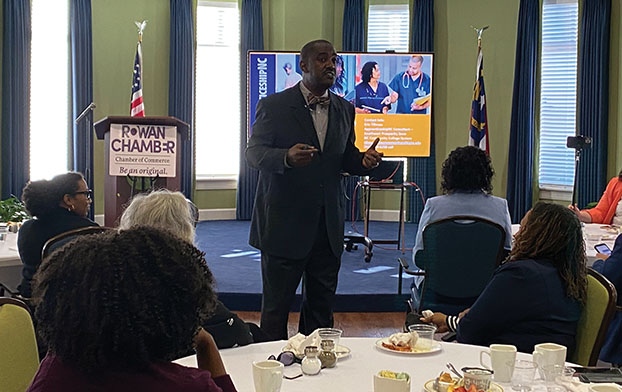 SALISBURY — A phenomenon happening across the country is hurting employers.

Eric Tillmon says he has the solution.

In the previous year, millions of American workers have left their jobs. A record 4.3 million people quit their jobs in August, according to data from the U.S. Department of Labor. Experts point to a number of reasons for the movement, including employees being dissatisfied with management, pay rates or working conditions. Tillmon calls the exodus “the great resignation” and “the big quit,” both phrases that have widely used to describe the situation.

“People are just simply leaving their jobs, don’t know where they’re going,” Tillmon said. “Some are becoming entrepreneurs. Some are taking jobs where they can work remotely. Some just aren’t going back to the workforce. But whatever the case is, they’re leaving in droves.”

Speaking to a room of local business leaders at Trinity Oaks on Thursday morning, Tillmon said the answer to maintaining a robust workforce is apprenticeships.

“Even though the great resignation is real, when it comes to apprenticeships, we’re still holding strong,” He said.

Tillmon is an apprenticeship consultant for Apprenticeship NC, a program managed by North Carolina Community Colleges that works to implement workforce development programs across the state. Tillmon is responsible for overseeing the southwestern property zone, a 10-county region of which Rowan is a part. Tillmon was the keynote speaker for the Rowan County Chamber of Commerce’s Power in Partnership breakfast on Thursday.

The three main components to a registered apprenticeship program are job training, classroom instruction and a progressive pay scale. With those elements in place, Tillmon said Apprenticeship NC can help any business develop a program that fits their needs. Apprenticeship NC will even pay for an apprentice’s associates degree while they are in the program.

There are several reasons, Tillmon said, why he believes apprenticeships are the big fix for the big quit. For one, Tillmon said 92% of apprentices retain employment after they finish their programs. Another reason is that North Carolina businesses received $1.70 in return for every dollar they invested in an apprenticeship program, according to data collected during a survey.

The average apprenticeship program in North Carolina lasts for a little over three years and includes less than five employees, according to Apprenticeship NC data.

Not only could apprenticeships give employers a way to shore up staffing deficiencies, but Tillmon said they could help companies prepare for the vacancies created in the coming years as a wave of older employees retire.

Last year, Apprenticeship NC teamed up with Rowan-Salisbury Schools to implement Apprenticeship Rowan. The program seeks to connect high school students in the district with local employers, including Power Curbers and Hexagon Agility. The pre-apprenticeship program is still early on in its implementation, but Tillmon said he has high hopes for the partnership.

To set up a registered apprenticeship program, Tillmon told employers to call him. He can be reached at 919-807-7175 or by email at tillmone@nccommunitycolleges.edu.

Prior to Tillmon’s presentation, Rowan County Board of Commissioners Chairman Greg Edds took the lectern to highlight some of the funds designated for Rowan County in the state’s new budget. The $25.9 billion budget has been passed by lawmakers and now awaits the signature of Gov. Roy Cooper, who expressed his intent to sign it this week.

Included in the budget are tens of millions of dollars for Rowan County. Edds highlighted a few of the projects and entities that will benefit from funding, specifically mentioning $10 million secured for the North Carolina Transportation Museum, $4.7 million for a new Partners in Learning facility and $5 million for the Mid-Carolina Regional Airport.

He paused for a moment to laud the $23 million that will go directly to the town of East Spencer. Those funds will be used to erase the town’s debt and upgrade its aging sewer and water infrastructure.

Edds called East Spencer Mayor Barbara Mallett to the stage to congratulate her on the funding. He then foreshadowed the potential for more economic development in the East Spencer area.

“You have of course heard about Chewy,” Edds said, “but we have now some additional deals that are working down Long Ferry Road that could be as much as three million square feet of industrial space.”

The Rowan County Chamber of Commerce will host its next Power in Partnership on Dec. 16 at Trinity Oaks. More information can be found online at rowanchamber.com.