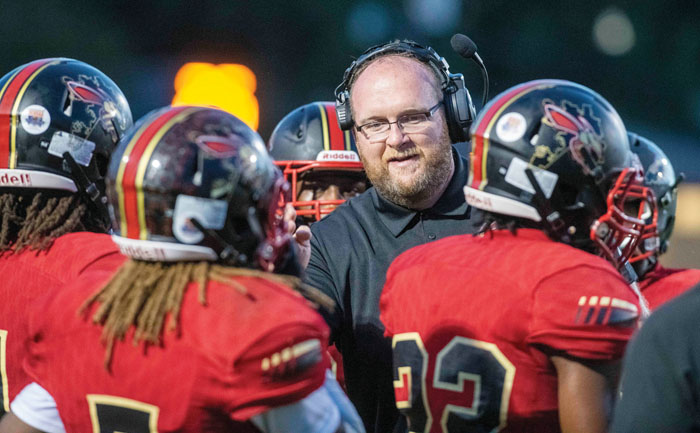 SALISBURY — Salisbury head football coach Brian Hinson said before the playoffs started that the 2A West bracket was the toughest he’s ever been involved with.

Nothing has happened to change that line of thinking. The top seven seeds, all conference champions with impressive records and impressive credentials, are still standing after two rounds. The only upstart left in the bracket is 24th-seeded East Gaston, which runs headlong into No. 1 seed Shelby on Friday.

Still moving forward and on collision courses are No. 4 Reidsville and No. 5 Hendersonville, as well as No. 7 Monroe and No. 2 East Surry.

Any 32-team bracket in which Salisbury (11-0) is the No. 6 seed has to be pretty tough. The Hornets average 56 points per game, allow 3 per game and have running-clocked 10 foes.

The Hornets have physically train-wrecked every opponent, including two pretty talented ones in their split 1A/2A Central Carolina Conference that are still alive in the 1A West bracket.

Thomasville was the lone team that escaped a running clock against the Hornets — barely. The Bulldogs tacked on a couple of late scores after Salisbury reserves turned it over and  they lost to the Hornets by a respectable-looking 49-21. But the Hornets scored six unanswered TDs while it still mattered.

Salisbury beat North Rowan 60-0 to close the regular season. It says something about the Hornets that a team they beat 60-0 has won two playoff games.

That No. 6 seeding will come into play for the Hornets on Friday, as they hit the road to play Maiden, about 13 miles southeast of Hickory.

Maiden is 12-0 and is the only team in the state that can say that.

Salisbury hasn’t played anyone nearly as good as Maiden yet. Of course, Maiden hasn’t faced anyone remotely like Salisbury, either.

Maiden is, by all reports, at least twice as good as it was last spring when Salisbury went there and demolished the Blue Devils 52-12 at Thomas E. Brown Stadium in the first round. Maiden had a lot of sophomores last season. Now they’re juniors.

Talent travels just fine, as a wise man once said, and Salisbury probably isn’t overly concerned about being on the road.

Some of the current Hornets were on the team in 2019 when Salisbury had to win at Washington, Hertford County and Randleman to get to the neutral-site state title game that the Hornets lost to Shelby. Last spring, in the COVID delayed 2020 season, Salisbury had to win at Maiden, Burns and North Davidson to get to the state title game that the Hornets won against St. Pauls.

In other words, Salisbury is 6-0 in road playoff games the past two seasons. Hinson said the Hornets enjoy being on the road.  The numbers back that up.

The Massey Ratings list Salisbury as a two-touchdown favorite at Maiden, with a 74 percent win probability.

It figures to be the Hornets’ first real battle of the season and they will have to be focused from the start. Maiden has annihilated opponents almost as thoroughly as Salisbury has, outscoring teams 486 to 81.

Salisbury has racked up an incredible number of special teams and defensive scores. Linebacker Jalon Walker, headed to Georgia, was named this week as a Shrine Bowler, an honor, even though the game itself won’t be played. Nick Hall, who anchors the defensive line, has proven impossible to budge so far.

A Salisbury victory combined with a Monroe win at East Surry (Monroe is favored in that one despite the seeds) would put Salisbury at home next week.

Tickets are being sold at the gate.  It’s probably a good idea to try to get to Maiden early, as they love their football in Maiden.

Seeded 12th in the 1A West bracket, North Rowan heads to No. 4 seed Robbinsville for a battle of 8-3 teams.

It’s a 225-mile trip to the mountains for the Cavaliers, and while they practiced in friendly, warm weather on Wednesday, this will be a cold-weather game, with temperatures expected to fall into the mid-20s.

North will depart from Spencer at 10 a.m. on Friday, so the Cavaliers can make a few stops to rest and stretch. They’ll have a walk-through in Bryson City that’s been arranged by coaching colleagues.

“The trip is going to be half the battle,” North head coach Nygel Pearson said.

Robbinsville won a good mountain conference, a league that included Murphy, which also is still alive in the 1A West bracket.

The game that stands out on Robbinsville’s season schedule was a victory on opening night against the 4A Asheville team that demolished Davie and North Davidson.

Robbinsville lost to Cherokee during the regular season, but avenged that loss in a big way by smacking Cherokee 46-18 in last week’s second-round playoff matchup.

The star for Robbinsville is back Cuttler Adams, who had four rushing TDs last week.

“We’re going to need the key stops,” Pearson said. “They like to keep the ball and squeeze the life out of the game.”

North lacks depth and may be a year away from being able to win a game of this magnitude, but the Cavaliers pulled a tough one out on the road last week against a Thomas Jefferson Classical Academy team that had a Shrine Bowler in the lineup.

Alford threw to Amir Alexander for the deciding TD in overtime, making North 3-0 in overtime games this season and giving North its first road playoff triumph since it beat Brevard in the mountains in 2016.

Anytime you can go 3-0 in overtimes, there’s a lot to like about a team.

This is a team with some resilience.

North will be a 13-point underdog at Robbinsville, according to the Massey Ratings, and is given a 29 percent win probability.