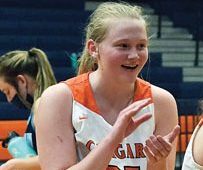 Carson's Mary Spry plan to play for Catawba next. File photo by Wayne Hinshaw, for the Salisbury Post

On her own body. Her toes had turned a weird hue of blue. The upper part of her injured  foot looked like it had been dyed purple.

Spry’s ankle was sprained about as badly as you can sprain it in the first 30 seconds of Carson’s 3A second-round playoff game with Cuthbertson on Feb. 25. There’s no good time for a sprain, but in the middle of the state playoffs qualifies as an exceptionally bad time for such a thing to occur.

Up to that point, Spry had been Carson’s leading scorer six times, including a 21-point effort in the South Piedmont Tournament championship game against West Rowan and a 16-point outing in a first-round playoff win against Kings Mountain.

Spry was limited to limping, rehabbing and hoping for a while, but her teammates, four of them seniors who had played together forever, kept right on winning. They survived Cuthbertson. They prevailed at Enka, which had a Division I recruit. They blew away Hickory with a flurry of 3-pointers in the first five minutes of the regional final.

“When we played Hickory, we knew that if we could win that one, Mary probably would be able to play some in the state championship game,” Carson coach Brooke Stouder said.

Playing in a state championship game had been a dream for all of those girls for a while.

And Spry did get to play a role in Carson’s 51-40 win against Asheboro in the Providence Grove gym that capped a 19-0 season. That game took place nine days after her injury.

Spry’s three points and six rebounds and interior defense helped lead to a celebration. It was a courageous effort.

“Mary was far from 100 percent — I don’t know if she was even 50 percent — but just her presence made an important contribution,” Stouder said.

Not many girls get to play in a state championship game. A lot fewer will ever be part of an undefeated season.  That’s going to stay with all of the team members forever.

“That game was for the state, so I prayed and I played,” Spry said. “There was a lot of Ibuprofen that week.”

Spry is a 6-footer with a broad range of skills. She has the height and length to be a solid post defender, but on offense, she can come at you from just about anywhere.

She could be a really important recruit as Catawba tries to maintain its recent surge to South Atlantic Conference and regional contender. The Indians offered Spry after a camp last summer and she verbally committed to the Indians in October.

“It’s a winning program with nice coaches, and it’s close to home,” Spry said. “I think Catawba’s style is a perfect fit for me. I can space the floor as a frontcourt player who can step out and shoot or drive.”

Spry, who scored 552 points in two seasons at East Rowan before transferring to Carson prior to last season, averaged 12.3 points and 5.8 rebounds for the Cougars as a junior. She was second on the team in both categories.

What really jumps out off last season’s stat sheet is her 59-percent field-goal shooting. She was an extraordinarily high-percentage finisher, as a post scorer, driver or offensive rebounder.

She shot 67 percent from the foul line and she could push that to 75 this season. She only attempted nine 3-pointers, but she made six.

There’s not much doubt that she can shoot with range if she needs to.

“She really could play any position for us, 1 through 5,” Stouder said. “You’ll see her in a larger role as a senior. She’ll help out with the ballhandling and she’ll shoot more 3-pointers. She should be hard to guard, a mismatch for our opponents. She should be able to post up smaller defenders and take the big girls outside.”

Spry made a decision while she was still in middle school at Erwin to work on basketball year-round.

She’s developed a strong work ethic and has put in the time outside of the normal high school routine to build her unusual skill set.

Catawba has a lot of experience, talent and quickness on its current roster, but Spry is a little different from anyone the Indians have now. She could play early and often.

“I believe she’ll make an impact,” Stouder said. “Catawba made it clear to her she was a priority signing and they really showed a lot of interest. You always want to go where you’re celebrated the most.”