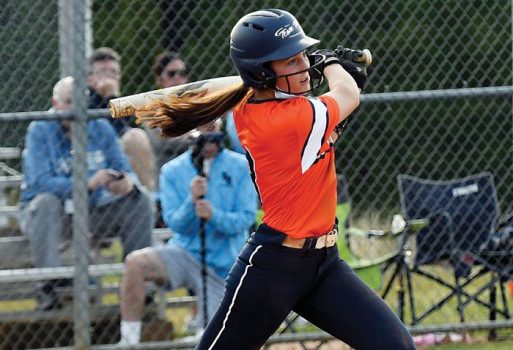 Abbey Nixon tore an ACL while with the track team, but nine months after surgery, she has recuperated. She had a .510 batting average as  junior. File photo by Wayne Hinshaw, for the Salisbury Post 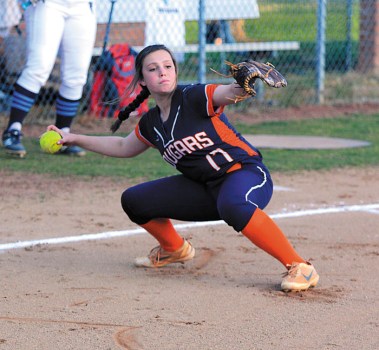 Allie Burns, a Catawba signee, hit .426 in 2021 and can play several positions, but will likely be third baseman. File photo by Wayne Hinshaw, for the Salisbury Post

CHINA GROVE— In a rare display of cooperation between South Atlantic Conference rivals Catawba and Lenoir-Rhyne, Carson softball stars Abbey Nixon and Allie Burns signed together in the school gym on Tuesday morning.

They’ll still be teammates this spring for the Cougars, so they collaborated on the spotlight on Tuesday. Their days as rivals can wait a while.

“They’re unselfish,” Carson head softball coach Charissa Duncan said. “They didn’t mind sharing signing day. It made it a little easier for a lot of people.”

Both players are versatile enough that they were recruited with the designation of “utility” players, but both are skilled and athletic and should find roles early at the Division II level.

As members of the Class of 2022, both girls were grateful and appreciative to experience a signing day.

COVID has crushed or detoured a lot of dreams. A lot of players who normally would’ve been offered scholarships are still waiting.

There’s a backlog of talent on college rosters in a lot of sports right now, with veteran players taking advantage of the universal COVID redshirt to play an additional season. In addition to that, the high school classes of 2021 and 2022 didn’t get seen by as many college coaches as they normally would have. There were canceled camps and tournaments. Scouting opportunities were limited.

Nixon and Burns will become four-year varsity players for Carson this spring, but they were limited to a six-game season when COVID struck in March 2020. Their 2021 season was shortened to 15 games, even with Carson winning a conference championship.

Carson has been good during the course of their careers when it’s been able to get on the field — 32-16 and 15-3 in conference play.

Nixon committed to Lenoir-Rhyne shortly before her junior season began. There was interest from Division I schools such as Appalachian State, but she saw Lenoir-Rhyne as an opportunity to play earlier. She chose the Bears over D-II rivals such as Catawba, Mount Olive and Converse.

“I’m a homebody and didn’t want to go too far away,” Nixon said. “Lenoir-Rhyne wasn’t on my radar for a long time, so it was a surprise when they started recruiting me. When I had a chance to visit there, I knew it was where I needed to be. I’ve heard a lot of athletes say that you know immediately when you’ve found the right fit, and I knew that day that I walked away from there, that’s where I wanted to go.

She already has friends in Hickory, including former Carson teammates such as freshman basketball player Ellie Wilhelm and freshman volleyball player Jaden Vaughn.

The early college commitment last winter relaxed Nixon. She exploded as a junior when she paced the county in batting (.528) and runs scored (22).

She started to show power with seven doubles. She had a four-hit game the night Carson beat West Rowan 13-12,  a game that would prove critical in Carson winning the regular-season conference championship. Nixon was a co-player of the year in Rowan County and received all sorts of postseason accolades, including All-State.

“She had a great junior season,” Duncan said. “She was consistent. She got the key, two-out hits. She hit balls in the gaps, and she got it done defensively whether she was playing  shortstop or center field. And as a person, she was a great teammate, very humble. You’d like to have nine like her.”

Nixon has experienced a challenging off-season, as she recovers from a torn ACL.

She tore an ACL competing in the triple jump.

Burns is from a mentally tough, athletic family and believed early on that basketball was going to be her thing.

By the time she was 7, softball had moved to the forefront of her interests, and she was competing on travel teams.

She was the cleanup hitter for a Rowan Little League team that finished second at the World Series in 2017.

Volleyball entered the picture when she was 12. She’s good at it. As Carson’s libero, she was an all-county player this season.

“Volleyball has always been a fun hobby,” Burns said. “But mostly I’ve used the sport as a great way to stay in shape for softball.”

She’s played infield and outfield for Carson softball, although she’ll likely be able to focus on an infield role as a senior.

“That’s one of the things I love about softball, playing different positions,” Burns said.

She also can hit. She batted .426 as a junior and made all-county, all-conference and all-district teams.

“You can not only put her anywhere on the field, you can put her anywhere in the lineup, and she’ll be productive,” Duncan said. “She can be someone who gets on base for you or someone you count on to drive in runs.”

Burns committed to the Catawba Indians in June.

“I liked everything about the school and the coaches,” she said. “I like the way the softball team practices.”

Burns has family ties to Catawba. Her brother, Zeb, is a member of the baseball team.