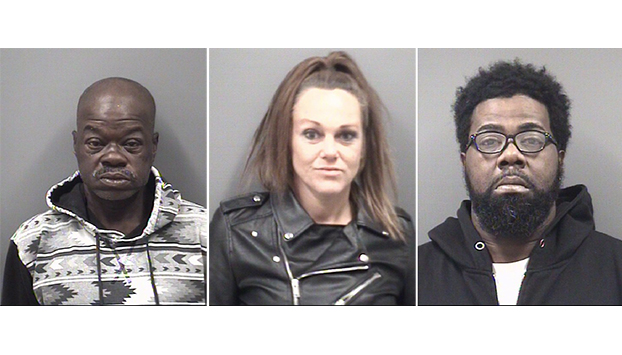 From left, Glasby, Green and McCrae

Maj. John Sifford said the Rowan County Sheriff’s Office was looking for Gerrell Laquan McCrae when it began surveilling the home. McCrae allegedly made threats toward law enforcement officers and people that he thought were responsible for outstanding charges against him. He faced a list of crimes.

When deputies began surveilling a house at 2545 Cannon Farm Road, they stopped a vehicle driven by McCrae’s girlfriend, Crystal Green. She was arrested for an outstanding warrant for larceny.

Sifford said deputies “set up a perimeter” around the house and tried to call McCrae outside. When others left the house, a man named Mark Glasby attempted to shut the door to the house as McCrae was being called out, Sifford said. Deputies used a stun gun on Glasby, and McCrae emerged shortly afterward.

Glasby was charged with resisting, obstructing or delaying officers for trying to shut the door.

Sifford said a search of the Cannon Farm Road house yielded drug paraphernalia, including hypodermic needs, as well as evidence of narcotics being flushed down a toilet.