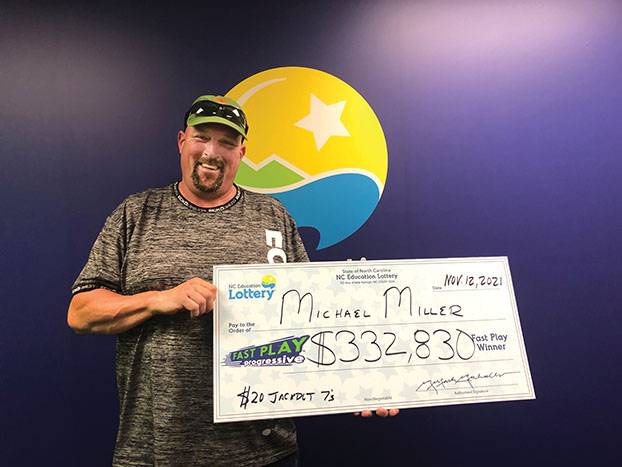 Michael Miller, a Department of Transportation worker who lives in Salisbury, won a $332,830 Fast Play prize. Miller struck gold when he stopped at Charlie’s Mart on Faith Road on Friday and tried the $20 Jackpot 7s game, a new Fast Play game.

“It came at a great time,” Miller said in a news release. “We’re getting a new home. I’ve got to make sure my mom and dad are good and then I’m going to invest the rest.”

Miller became the first winner of the game’s new top prize. Not only did he win the Fast Play jackpot of $132,830 at the time he bought his ticket, but he also won an additional $200,000.

Miller drove to lottery headquarters in Raleigh on Friday afternoon to collect his winnings. After required federal and state tax withholdings, he took home $235,483.

Fast Play’s rolling, progressive jackpot increases with every ticket sold until it is won. The odds of winning a Fast Play jackpot are 1 in 240,000. With Fast Play tickets, players can see if they have won and how much instantly. Printed on each is the amount of the jackpot when it is sold and how much of that jackpot it could win. Players can also win instant cash prizes on their Fast Play tickets.

Sales from games such as Fast Play make it possible for the lottery to raise more than $900 million a year for education. For details on how $7.4 million raised by the lottery made a difference in Rowan County in 2020, visit www.nclottery.com and click on the “Impact” section.