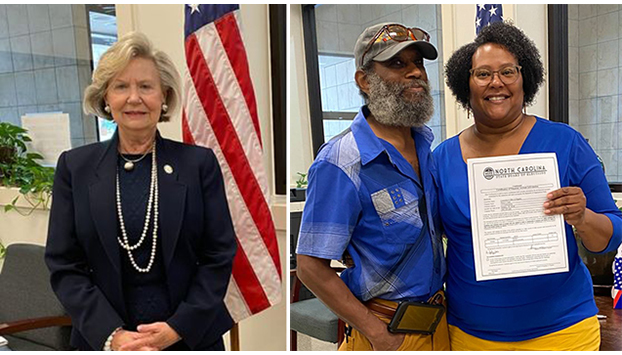 Mayor Karen Alexander, left, poses for a photo when she filed for office at the Rowan County Board of Elections. At right, Mayor Pro Tem Al Heggins poses with filing paperwork at the Board of Elections Office with her husband, Isaac.

The Rowan County Board of Elections met Tuesday to conduct a recount for two municipal races in 2021. In the most closely-watched race in the county, Alexander received 2,509 votes, or 49.97%, while Mayor Pro Tem Al Heggins received 2,495 votes, 49.69%. There were a total of 17 write-in ballots cast, leaving a difference of 14 votes between the two candidates.

There were no changes to the vote tally after Tuesday’s recount.

Tony Hillian, an alderman in East Spencer running for re-election, was also declared the winner of the third and final seat up for grabs in East Spencer. Alderman Albert Smith submitted a request for recount after finishing just one vote behind incumbent Hillian in the election.

Overall, 7,326 votes were cast across the county in the 2021 municipal election, which represents 18.06% of eligible voters.