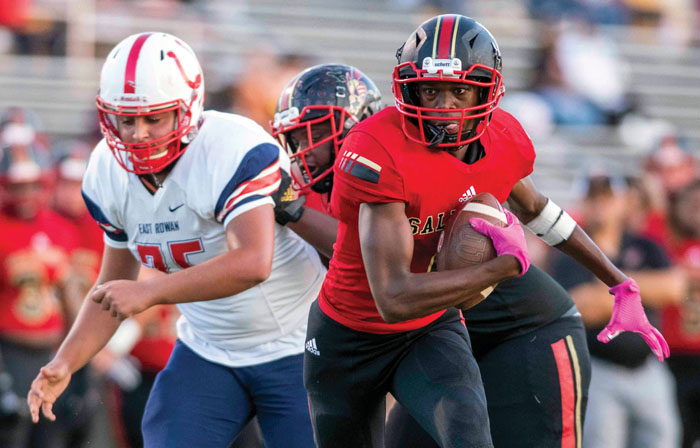 Salisbury’s Kevin Williams runs the ball during a game against East Rowan on Sept. 3. JON C LAKEY / FOR THE SALISBURY POST

SALISBURY — Salisbury head football coach Brian Hinson closes each practice — whether it was average, good or great — by telling the Hornets he loves them.

It’s a family atmosphere where a well-stocked refrigerator is maintained in the coaches’ office. It’s a domain in which many players choose to attend Wednesday worship services as a group. It’s a place where an ‘A’ on a report card is at least as important as a sack.

“Do we get mad at ’em and yell at ’em and get disappointed in ’em,” defensive coordinator Mike Herndon said. “Sure we do. But they always know we care about ’em.”

It’s an encouraging, motivating environment that has helped players such as receiver Kevin Williams thrive.

Williams is a senior, but the 6-foot-2 receiver is a first-year Hornet.

His family moved to Salisbury from Raleigh, where Williams was part of the strong Leesville Road program. That’s a program that beat Richmond County in the 4A state playoffs last Friday.

“Salisbury is a little different from Raleigh, but football has been a lot more fun for me here,” Williams said. “The players and the coaches are nice, and they made me feel welcome right from the start. I knew they had a great football team before I got here. A lot of these guys have rings. I hope to get one, too.”

That was the best possible way to get started in a new town, and, after making sure the new guy was eligible, Hinson was pleased to add another talented player to a powerful roster.

It didn’t take long for Williams to become a starter.

“Since Kevin didn’t get to work out with us this summer, he had a lot to catch up on, but he’s a smart kid who works hard,” Hinson said. “He picked up on things fast. He found a home as our ‘Z’ receiver.”

Williams isn’t built like Walker. He’s long, lean and wiry at 165 pounds, but he doesn’t mind throwing those 165 pounds around.

“He’s been a tremendous blocker,” Hinson said. “That’s been his most important role for us. He takes pride in his blocking.”

Some of those mind-blowing Mike Geter runs have been helped along by Williams’ blocking on the edge.

As a pass-catcher, Williams has posted modest stats, but he’s made impact plays on a team that has young mega-stars in sophomore quarterback Geter (26 rushing TDs and 16 passing TDs) and 210-pound junior running back JyMikaah Wells (21 rushing TDs).

It appeared Salisbury was going to settle for a 21-0 halftime lead against Bunker Hill in last week’s second-round playoff game, and the Hornets were enduring one of their longer scoring droughts of the season when all heck suddenly broke loose at the end of the first half. Jayden Gibson’s interception on a tipped ball and long return to the Bunker Hill 7 set up a touchdown for 28-0. Then Salisbury’s defense forced a punt and Savion Freeman returned the ball to the Bunker Hill 23. Williams scored moments later for a 35-0 halftime lead, and that was the ballgame.

“It was a cool play for the touchdown,” Williams said. “We had a screen pass set up just right and we had such good blocking from everyone that all I had to do was take it in.”

“He’s good on the screens,” Hinson said. “He lets things develop and follows his blocks. Then he weaves his way through tacklers.”

That screen-pass TD was Williams’ seventh reception and second touchdown.

He caught a 61-yard touchdown pass against South Davidson for his first score as a Hornet.

He dropped a potential TD pass against East Davidson, but he made up for it that night with his fierce blocking.

“It’s not easy being that new kid on the block, picking up and leaving your friends and having to make new ones as a senior,” Hinson said. “That makes life a little different, but Kevin is a really good guy. He’s fit right in.”

Whether Williams will need to be fitted for a ring remains to be seen.

The sixth-seeded Hornets have some ferocius games in front of them. They’ll be on the road at third-seeded Maiden (12-0) on Friday.