High school basketball: Carson girls have to slip some, but how far? 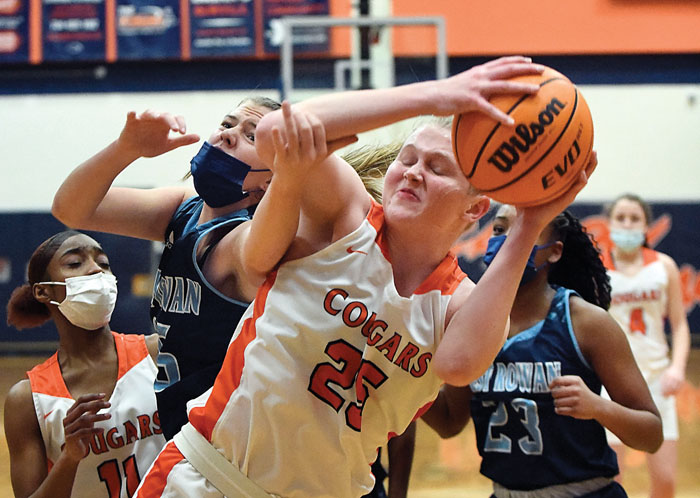 Third in a series of previews on local basketball teams …

Playoffs: Won 5 straight to take the 3A state championship

It was a perfect season, from that 50-point win on opening night to the tornado that struck Asheboro in the Providence Grove gym in the second half of the 3A state championship game. It was a sweet blend of defense, intensity, passing and 3-pointers that no one they faced was able to handle for 32 minutes. Individually, they didn’t alarm anyone, but together they were close to unstoppable.

Carson graduated seven seniors, including four who started in the state championship game, so common sense tells us the Cougars can’t be as good.

How far they’ll drop off has been the most-asked question of the girls basketball off-season.

“We lost talent, but more than that we lost experience and chemistry that is hard to replace,” Stouder said.

Carson will have only eight girls on the varsity. They’ll have another eight getting experience on the jayvee team because they’ll be in total rebuild mode in 2022-23.

Eight is enough as long as everyone can stay healthy, and it’s not like anyone is going to feel sorry for the defending state champs. Carson will play North Rowan and Salisbury right away, so the Cougars will find out in November where they stand.

Spry is a 6-footer with post moves, shooting range, a surprisingly quick first step and perimeter skills. She’s a major matchup problem for most opponents and is committed to Catawba. She averaged 12 points on a balanced team that blew out people, so she could have scored a lot more. Now she’ll have that chance. The Cougars are going to need 15s, 18s and 20s from her every night.

“Mary is very driven to be good and she’ll be difficult to guard with her size and skills,” Stouder said.

Isley averaged 10 points and scored in double figures nine times last season. She scored 13 points against Enka and 13 more against Cuthbertson, and those were fierce playoff games. So there’s no doubt she can boost her offensive production.

“She’s been in the program four years and knows what it takes to play at a high level,” Stouder said. “She can do everything from shooting the 3, to finishing drives, to running in transition to defending the post. She’s always been in the shadow of older players, but now it’s her time to shine, and she will.”

Spry and Isley make the Cougars contenders for the 3A South Piedmont Conference championship. Whether Carson can remain a force in the county, the region and the state will depend on the rest of the cast. How much have last season’s reserves improved?

And how much will seniors Riley Isley (Hannah’s twin) and Makayla Johnson help?  Those two are making hoops comebacks.

Carson’s 2021 graduating class was around a long time, so talent got back-logged in the program. Riley Isley, who played on the varsity as a sophomore didn’t play basketball at all last season, focusing on soccer and tennis. Johnson, an exceptional softball player, starred for Carson’s jayvee basketball teams for two years, but didn’t play last season.

But now there’s a serious need for both of them.

“Riley is a tough, scrappy player who can rebound, defend and drive,” Stouder said. “Makayla is going to go very hard and she’s an athlete with some size.”

Camden Corley, Aliayah White and Kendall Barbee are seniors who will get major minutes for the first time. They came off the bench last season.

Corley and Barbee came to the court straight off the cross country trails, so they’re in great shape.

“Camden will handle the ball a lot and she can get it up the floor quickly with the motor she has,” Stouder said. “Kendall plays very hard and defends well.”

White is a different kind of runner from the cross country girls. She’s a blazer who owned the sprints in the Rowan County Track and Field Championships last spring.

“Aliayah can turn the jets on,” Stouder said. “She’s a really good athlete who has paid her dues and she could have a big season. She can shoot and she can take it to the basket.”

Seven of Carson’s eight varsity players are seniors. The exception is freshman Allie Martin, who was a tennis starter in the fall and is expected to make an impact for the soccer team this spring.