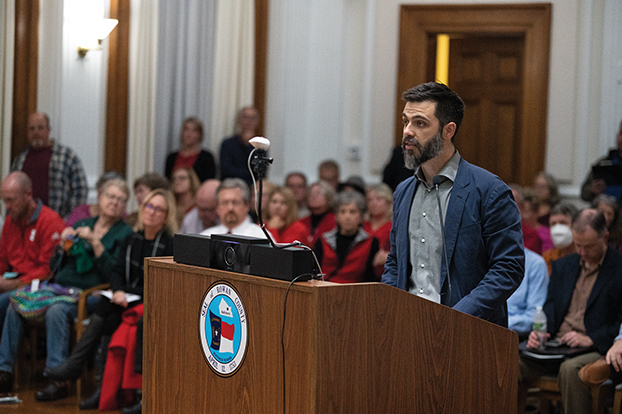 Josh Bergeron / Salisbury Post - Landon Abernethy, director of development for Birdseye Renewable Energy, speaks Monday during a public hearing about a solar farm in the Gold Hill area. A big crowd of people attended the meeting to hear about the solar farm.

SALISBURY — The Rowan County Board of Commissioners on Monday night turned down a proposal for a utility-scale solar farm in Gold Hill.

The vote, which was 4-1, came after a four-hour meeting filled with passionate debate and discussion. Commissioner Judy Klusman was the only one to vote in favor of the solar farm.

The project was proposed by Birdseye Renewable Energy, a Charlotte-based company and subsidiary of Dominion Energy. Birdseye was requesting a conditional district rezoning to develop the solar facility on six parcels totaling about 574 acres near U.S. 52, Old Beatty Ford Road and the Gold Hill Airpark.

Vice Chair Jim Greene said the solar project did not meet the county’s regulations and would “overshadow the community and change the nature of Gold Hill.”

Commissioner Mike Caskey cited the solar facility’s overall size and its proximity to another solar facility in Stanly County as reasons why he denied the request.

Chairman Greg Edds said the project just “doesn’t smell right to me” and had a laundry list of reasons why he voted against the project, including its impact on the air park and Gold Hill’s historic identity.

Klusman said she believed the property owners had the right to sell their land for the development of a solar facility, especially since the land is not adequate for farming.

Commissioner Craig Pierce voted “no” without speaking about the reasoning for his vote.

The decision was celebrated by the Gold Hill residents who organized opposition to the project, first rallying against the project in the summer and then showing up in numbers during a Rowan County Planning Board meeting in September. The Rowan County Planning Board voted 5-2 to not recommend approval of the request, but commissioners did not have to adhere to that decision.

Commissioners voted to deny the request after hearing presentations and arguments from Birdseye and the residents opposed to the project. The arguments were similar to those put forth at the Planning Board meeting, with Birdseye touting the solar facility as a safe, benign neighbor that would provide tax benefits for the county. The opposition, meanwhile, asserted the solar site would endanger pilots, negatively impact the environment and hurt Gold Hill’s historic identity. Both sides attempted to explain why the proposal did or did not meet the county’s new rules regarding large solar energy projects, which were adopted in April.

Birdseye’s President Brian Bednar told commissioners the company picked Gold Hill after surveying all of Rowan County. Birdseye was particularly attracted to the Gold Hill site, Bednar said, because the land is not viable for farming or for residential development, and receives plenty of sun.

Landon Abernethy, director of development for Birdseye, highlighted ways the company tried to meet concerns of nearby residents by adjusting the proposal. Abernethy said the company pulled back solar panels 600 feet away from U.S. 52 to prevent the facility from becoming an eyesore in addition to bolstering its screening standards.

“It really is going to be effectively screened from U.S. 52,” Abernethy said.

In response to concerns over fire safety, Abernethy said the company would pay for and coordinate training with local fire departments and first responders who might have to respond to an emergency at the solar facility.

Abernethy touted the solar project’s benefit to Rowan County, saying that the solar facility would generate about over $2 million in tax revenue for the county over the 40-year life of the project. In his closing statement before the vote, Edds said the tax benefit to the county would be negligible.

Birdseye’s presentation also included testimony from a flight instructor, who sought to dismiss concerns that the solar facility would be a risk to pilots flying at the Gold Hill Airpark.

Multiple landowners whose property would be used by Birdseye spoke during the meeting, asserting their property rights and belief in the project. Sam Nash, who owns about 350 acres of the land, described the project as a “win-win” since the county would receive tax revenue from the project and the nearby residents would receive a “passive” neighbor. Those who successfully opposed the site viewed the solar project as anything but.

Ritchie summarized the opposition’s argument in a presentation to commissioners, emphasizing the proposed solar energy facility would be within a mile of another large project just across the line in Stanly County.

“Rowan citizens will be unfairly squeezed between these two mega systems if this is allowed to happen,” Ritchie said.

Ritchie was the first of a handful of Gold Hill residents who spoke against Birdseye’s request. Ken Wiseman, a professional pilot and the air park’s newest resident, contradicted the opinion of Birdseye’s professional pilot by describing the site as a hazard to aviators. Darius Hedrick, who has led historic preservation efforts in the town, voiced his concerns about the solar facility’s impact on the town’s history and tourism. Jonathan Featherstone, a veterinarian who lives near the project, decried the loss of hunting land.

Almost every airpark resident who spoke against the solar project also expressed concerns about how the solar facility would impact their property values and the long term future of the airpark.