‘We’ll be back’: Owners of Hoff’s Grill plan to revive closed restaurant as a mobile food trailer 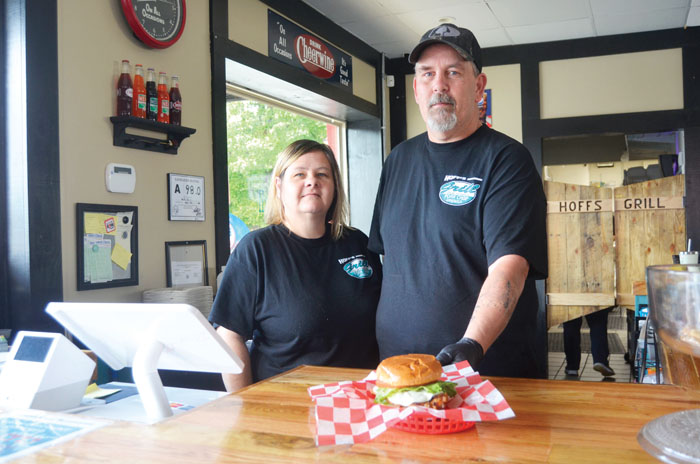 SALISBURY — Even though Hoff’s Grill closed its doors at the end of September, the Salisbury restaurant known for its pork chop sandwich isn’t gone for good.

“We’ll be back, just in a trailer,” said David Houchins, the restaurant’s owner.

Hoff’s Grill was originally founded in Lexington, but owners Larry Hoffner and David Arey moved the restaurant to North Long Street in Salisbury in 2014. The restaurant relocated again to 1621 W. Innes St. in 2017.

Houchins and his wife, Jolene, both of whom had worked for the restaurant for several years, purchased Hoff’s Grill in March 2020. Not even a full week later, the COVID-19 pandemic forced them to close their dining room.

The restaurant adapted to the pandemic like many others, shifting to curbside to-go orders. The strategy worked well, Houchins said, and it wasn’t until the dining room reopened that trouble started.

“When they opened the dining room back up, it went OK for a while,” Houchins said. “But when these new numbers came out, it just slowed down.”

On top of a decline in business, Houchins said it was difficult to find enough employees.

“When school started back, we lost all of our teenagers during the day and then they couldn’t work at night,” Houchins said. “They could only work a couple nights a week because they had band, football and school activities.”

Unlike in previous years, Houchins said the restaurant didn’t have much success replacing those students. As food costs began to rise and the family experienced several unexpected deaths, the husband and wife decided to close Hoff’s physical location.

“We just couldn’t see to do it anymore as far as making a profit,” Houchins said. “We decided that there wasn’t any use to staying open all the time to pay bills.”

Shutting down the Salisbury staple was not easy, Houchins said. It was always his dream to own a restaurant and he’s missed seeing both the customers and employees every day.

“Especially our regular customers that come in, we got to know them, they got to know us and we became friends,” Houchins said. “It’s different not seeing them.”

Houchins does have good news for Hoff’s most loyal customers. He is currently preparing a food trailer that will bear the restaurant’s name and offer several of its core menu items, including hot dogs, hamburgers and of course the pork chop sandwich. Battered fries and dipped chicken will be offered at certain events, Houchins said.

The trailer itself will be an “open concept” with a permanent roof and all the necessary kitchen equipment. Houchins is assembling the trailer himself and plans to have it ready by 2022.

In addition to the mobile Hoff’s unit, Houchins said the family will continue to run its stand at the Rowan County Fairgrounds and will return to offer food at Faith Fourth and the Autumn Jubilee next year.

Although Hoffner and Arey have moved on from the business, Houchins said he wants to continue to operate Hoff’s as a tribute to them.

“We’d like to keep more or less the legacy going to honor them,” Houchins said.