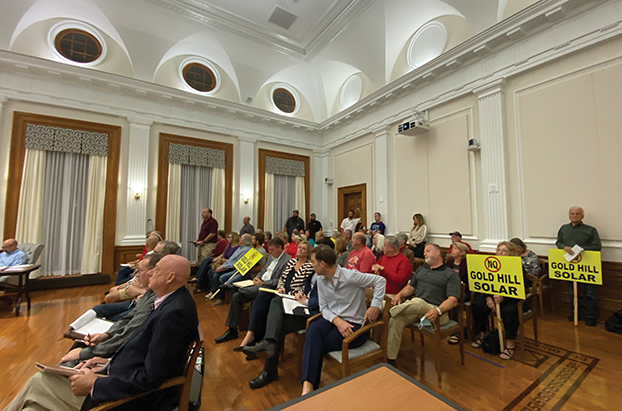 A major solar project planned for Gold Hill faced stiff opposition from residents at the Rowan County Planning Board meeting. After four hours of presentations and speeches, the board voted against the project. Ben Stansell/Salisbury Post

The Rowan County Board of Commissioners will consider a rezoning request from Birdseye Renewable Energy for the development of a utility scale solar energy facility on roughly 574-acres of land near the Gold Hill Airpark. Commissioners could vote on the request following a public hearing.

Birdseye’s plans have received organized pushback from many Gold Hill residents since they became known earlier this year. Dozens gathered at the Gold Hill Volunteer Fire Department in August to rally opposition to the solar project. The meeting room was packed with opponents of the facility when the Rowan County Planning Board held a hearing on the request in September. Several residents spoke against to the solar facility and carried neon signs with “No Gold Hill Solar” printed on them.

The Planning Board voted 5-2 against the rezoning request, but the vote is only a recommendation of denial and does not have to be followed by commissioners.

In anticipation of an impassioned crowd, commissioners have adopted a set of rules for the hearing. Following a presentation from the planning staff on the proposal, Birdseye will be allotted 30 minutes to make its case. Commissioners will be allowed to ask questions, and that will not count toward the company’s allotted time.

The public will be given 45 minutes to speak, with each individual speaker limited to three minutes. However, time may be yielded from one or several citizens to a spokesperson for the group. Birdseye will receive 15 minutes for rebuttal.

Birdseye is the first company to propose a major solar facility in Rowan County since the Board of Commissioners approved new rules regarding such projects.

The Board of Commissioners will meet at 6 p.m. in the J. Newton Cohen Sr. Room on the second floor of the Rowan County Administration Building.

Also on the meeting agenda:

• Commissioners will consider scheduling a public hearing for the Dec. 6 meeting regarding an incentive request from the Rowan Economic Development Council for “Project Excelsior.” The company behind the project is an existing employer in Rowan County that is considering our community for a potential expansion. If Rowan County is chosen, the company would add 40 jobs over the next two years. The company estimates it will also invest approximately $10.5 million in building improvements and new equipment. More details about the proposed terms of the incentive request will be provided on Dec. 6.

• Commissioners will consider approving a change to the county’s contract with ADW Architects for design and construction services relating to renovations at West End Plaza. The county is working with the firm on plans to transform parts of the former Salisbury Mall into an Agricultural Center. The contractual change would have ADW also work on plans to renovate/remodel the mall concourse at West End Plaza, which is adjacent to the planned agricultural center. The total fee for the additional services would be $62,300.

• Commissioners will consider a request from Rowan County Tourism for $32,466 in American Rescue Plan funding that would be used to bolster the Rowan County Lodging, Arts and Cultural COVID Business Grant. The grant program was established by the tourism agency earlier this year to help local institutions impacted by the pandemic. Tourism planned on using $100,000 in COVID-19 funding for the program, but it is now hoping to increase that total to $150,000. In addition to the request for $32,466 from the county, Tourism Director James Meacham plans on asking the tourism board for about $17,000 in funding.

The grant program opened in September and closed at the end of October. Meacham said about a dozen local entities applied for funding and their losses totaled in excess of $5 million.

Applicants had to demonstrate a loss of revenue of at least 20% during the period of April 2020 to Dec. 2020 compared to the same time period from the year before. Approved applicants will receive a grant equal to a specified percentage of the applicant’s decline in revenues. The specified percentage would be equal to $100,000 divided by the total reduction in revenue among the pool of eligible applicants. If an additional $50,000 is approved by commissioners and the Tourism board next week, Meacham said each applicant would receive more money to cover losses.

• The board will consider approving an agreement with appraiser Scott Whittington for him to provide a letter of opinion on the value of a Grants Creek Conservation easement.

Rowan County is currently working with Three Rivers Land Trust to amend a conservation easement the two entities have in place around Grants Creek. The county wants to amend the easement to allow a developer to temporarily disturb the land to connect to a sanitary sewer line. The connection is needed before Sherwood Development Group can build a 270-home development near the existing Forest Glen subdivision on Mooresville Road. Grants Creek runs along the back perimeter of the proposed development. The subdivision has already been approved by the Salisbury City Council.

The county’s current conservation easement has language that could be prohibitive to the land disturbing activity. Before the Three Rivers Land Trust considers amending the easement at a meeting in December, an appraisal of the easement is needed.

• Valerie Steele, airport and transit director, is seeking approval from the board to continue to have conversations with the city of Salisbury regarding the relinquishment of its extraterritorial jurisdiction zoning of the Mid-Carolina Regional Airport. Steele wrote in a memo to commissioners that the zoning conflicts with “airport development projects and the expectations set by the Federal Aviation Administration.” Instead, Steele would like Rowan County to establish a new airport district.

• Commissioners will consider approving an agreement with REI Engineers for the company to provide services for roof replacement at the Rowan County Courthouse. The proposal calls for the replacement of approximately 12,225 square feet of roof. The county would pay REI $34,9000 for the services.

• The board will consider accepting the transfer of the Eagle Point Preserve area of High Rock Lake from Alcoa.