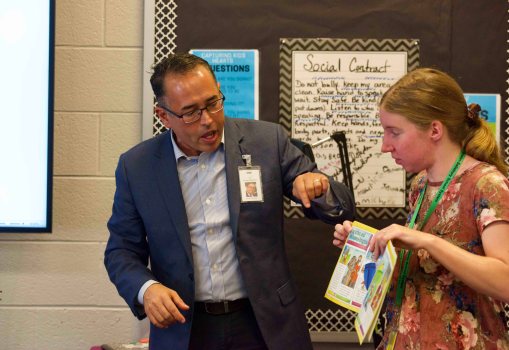 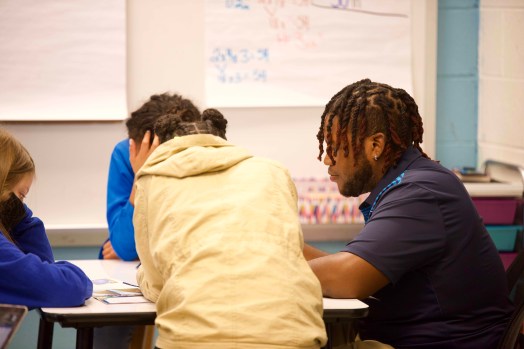 SALISBURY — In one class at Koontz Elementary on Tuesday, there were three teachers making their way through the class, working with kids on assignments, showing them examples and going about running a normal classroom.

It looked like a regular classroom with a large number of teachers, but only one of the three was a certified teacher. The other two were college students — a junior pre-apprentice and a senior apprentice — who are part of Koontz’s lab school.

It gives Lab School Director Jordi Roman chills when people can’t tell the difference between the teachers in his classrooms. That is the goal — the apprentice students and the master teachers are co-teaching at a level so they are indistinguishable.

“We really delve into the complexity of co-teaching so there’s parity,” Roman said. “Parity is the ability for you and I, not necessarily for them to be equal, but for you and I to see them as equal. It’s that importance of perception.”

The apprentices are in classrooms for the entire school year. Seniors work at least 30 hours per week in the school with master teachers in the program. Juniors work eight to 10 hours per week. Roman said master teachers coach and gradually release responsibilities to apprentices. At some point, the lines between who is a certified teacher and who is an apprentice start to blur. A couple months into the program’s first year of classes, it is already hard to see the difference.

“They are already feeling like that a quarter way through the year,” Roman said.

Roman said the co-teaching model is different from a standard student teaching experience because apprentices spend a full year in the classroom and are constantly being coached.

Roman said he has not heard any concerns about the program from parents. The program was methodical about informing parents there would be university students in classrooms involved in the learning process. Roman said the school surveyed students, and the kids liked having more than one teacher to help them as well.

The program was the brainchild of Koontz Principal Nicole Buckner. It was created as one of a long list of projects and initiatives funded by $26.3 million federal grant Rowan-Salisbury Schools was awarded late last year to push forward renewal goals.

Before the lab school and grant funding existed, there were a couple of co-teaching classrooms with apprentices in the school.

With the grant funding, the new program has 10 master teachers, 10 apprentices, five pre-apprentices and more pre-apprentices to come in addition to Roman’s position. The certified teachers helping with the program applied to participate; they are a mix of teachers who already worked at Koontz and from elsewhere in the district. The teachers and apprentices receive stipends for their work.

The lab school identifies new apprentices through partner institutions. Currently, it works with Catawba College, Livingstone College and UNC-Charlotte. Some of the students in the program are in two-year masters programs to receive certification.

Fifth grade master teacher Jena Horm said her story is unique. She has been at Koontz for 13 years, but Horm spent years as a teaching assistant before going back to school to become a certified teacher.

“Because of my unique situation, I got to experience what a classroom is like before becoming a teacher, being put in that role,” Horm said. “There is value in being in the classroom and learning as much as you can before being let go and kind of on your own. That first year for students who are just coming fresh out of college who’ve only done a typical 14- or 16-week course or student teaching session, that’s still an experience but it’s not the full experience of teaching.”

Third grade master teacher Angie Millspaugh-Staples was one of the first teachers to get on board with co-teaching before the lab school was created. She said the concept was interesting to her and an opportunity for up-and-coming teachers to get a better understanding of being in the classroom.

“By nature, I’m more of a coach,” Millspaugh-Staples said, adding the program gives apprentices the chance to see an entire school year as opposed to 16 weeks in a typical student teaching experience.

Millspaugh-Staples said the model is more of a partnership than when she works with a traditional student teacher and largely hands the class over to the student.

Brooklyn Hawkins, an apprentice and senior at UNCC, said she has been able to see everything that goes on in a classroom. She said the experience is making her feel ready to have her own classroom.

“With this program I’m able to do that, I feel like I’m getting all that experience to help me with that next step,” Hawkins said, adding it is nice to have a split workload in the room so she does not get overwhelmed while trying to learn. As far as the workload of being in school and keeping up with her class schedule, Hawkins said she thinks it is good preparation for how busy teachers can be during the school year.