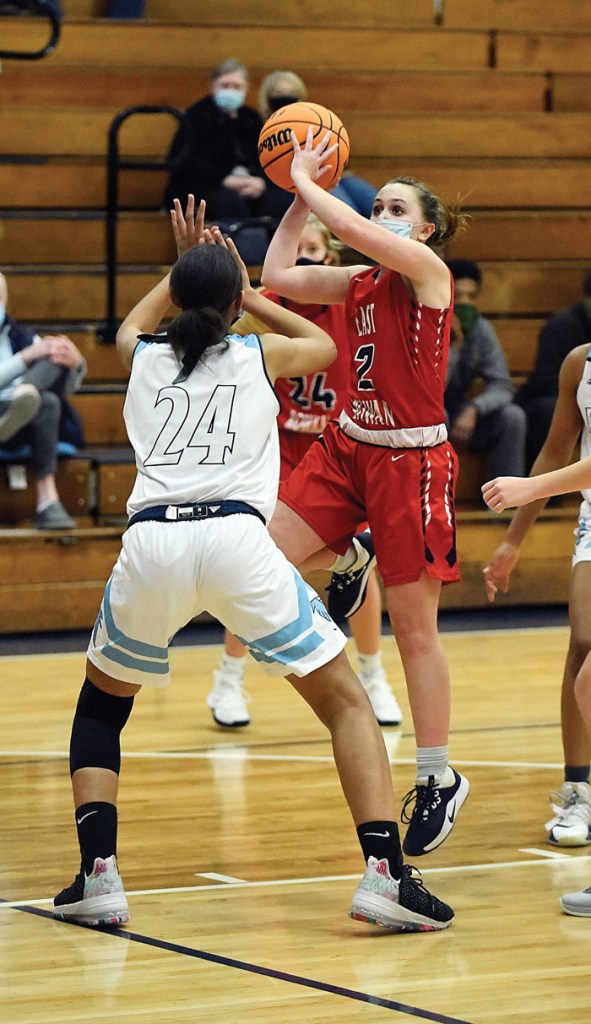 East's Madie Honeycutt (2) is one of three seniors returning for the Mustangs. File photo by Wayne Hinshaw, for the Salisbury Post

GRANITE QUARRY —  East Rowan’s girls have a new coach in former Catawba standout Bri Johnson Evans, but they won’t be starting over.

Senior-less last season, the Mustangs have three good ones this time. They’ll give Evans a chance to start her head-coaching career with a solid season.

“Night in and night out, we’re going to be competitive,” Evans said. “I do like this team. Practices have been fast-paced. There’s a lot of energy.”

Evans replaces Kevin Holland who rode a roller coaster during his five seasons in Granite Quarry. He had to start from scratch twice, once when he took the job and then again last season.  East won its opener, but didn’t taste victory again in the COVID-condensed 2020-21 season.

The Mustangs averaged 22 fewer points per game than they did when they won 20 games with a tall, talented squad in 2019-20, and they allowed 12 more. The Mustangs didn’t lack heart, but they lacked experience and height, and there were a lot of nights when rebounds were tough to come by.

Mac Misenheimer, who played varsity for the first time as a junior, led the Mustangs with 8.2 points per game and could score more as a senior.

“Her defense creates her offense,” Evans said. “She’s good at getting in the passing lanes, getting steals and getting layups.”

Madie Honeycutt has been around the longest, as she was the backup point guard on the varsity as a freshman. Honeycutt had a 14-point game against West Rowan last season and averaged 6.3 per game.

‘She’s a point guard who can get the ball up the court fast for us,” Evans said. “As our most experienced player, we’ll count on her for a lot of leadership.”

The third senior is Clara Beaver. She’ll make 3-pointers. She was in double figures twice last season, scored in every game and averaged 7.4 points.

A five-person junior class gives the Mustangs some depth.

Mia Kluttz and Peyton Whicker got some experience last season and are good defenders.

Evans said Hallie Cox excels at communicating with her teammates and getting them in the right places. Lindsey Cook, another new face, is a soccer standout. She’s active on defense and aggressive on offense.

The lone sophomore is Hannah Waddell, a golf standout who turned in a strong varsity basketball season as a freshman. She averaged 7.5 points and scored in double figures three times. Her 15-point effort against South Iredell was the Mustangs’ biggest offensive outburst all season.

“She handles the ball well and shoots it well,” Evans said. “We want her to shoot it more.”

Evans will have two freshmen on the varsity. Kady Collins and Kori Miller provide are good ballhandlers and are expected to help right away.