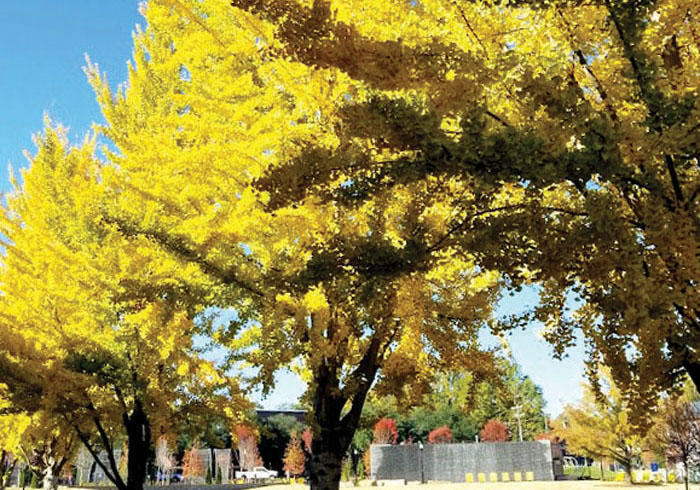 The leaf color on the maples, oaks and hickories are outstanding. The ginkgo trees located near the new Bell Tower Park are culminating the season with a spectacular show of golden yellow foliage.

The ginkgo, also known as Maidenhair, is actually a prehistoric tree with leaf fossils dating back over 200 million years. Ginkgo (Ginkgo biloba) trees can live as long as 1,000 years and grow to a height of 100 feet with a 30–40-foot spread.

Ginkgo trees are healthy and pest-resistant trees with the ability to survive in the harshest growing conditions. It’s cast-iron because of resistance to insects, diseases and difficult soil types. There are no known pests that kill the tree.

These trees should be grown in full sun in well-drained soil for optimal growth. The common ginkgo has short branches with unique fan-shaped leaves with veins radiating out into the leaf blade with a surface that feels almost rubbery. One of interesting foliar attributes of this species is it sheds its leaves almost overnight, avoiding continuous cleanup.

Ginkgos also have another anatomical distinction of being dioecious — either female or male. The odor of the female tree is strong and undesirable. There are numerous cultivars ranging from dwarf selections to weeping ginkgo forms now available. Go to https://plants.ces.ncsu.edu/plants/ginkgo-biloba/ for more detailed information.

Gotta Run: Ten ways to stay on track with…