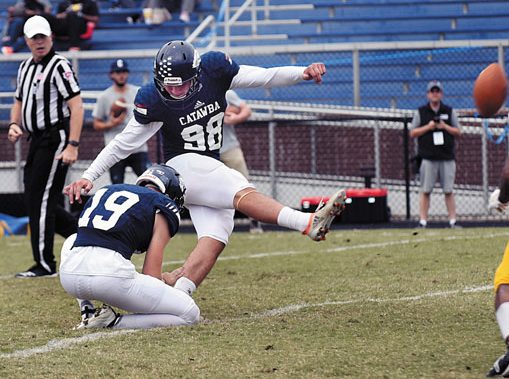 Catawba's Clayton Crile had the lone entry on the scoreboard for the indians, a 22-yard field goal in the second quarter. File photo by Wayne Hinshaw, for the Salisbury Post

HICKORY — It was WSAT’s Buddy Poole’s last day of play-by-play for Catawba football, and Poole was practically groaning on every syllable by the time Saturday afternoon’s first quarter ended.

It was 21-0 by then. It got worse at Lenoir-Rhyne’s Moretz Stadium.

“Well, if you’re just tuning in, you haven’t missed a thing,” Poole dryly offered in the middle of the third quarter with the Indians trailing the Bears 42-3.

And it got worse.

The final was Bears 56, Indians 3 in a South Atlantic Conference contest that brought down the curtain on Catawba’s season.

And it could have been worse.

It would have been 63-3, but the Bears lost a fumble heading into the end zone with a minute to go. It’s not like they were taking a knee in a long, storied and sometimes heated series. This was the 100th installment of that rivalry, but it will be remembered fondly only by those among the crowd of 5,646 who were cheering for L-R.

Officially, Catawba finished with a 5-6 record, with COVID-based postponements against Wingate and Limestone being declared forfeit losses on Saturday by the SAC.

On the field, the Indians went 5-4, but it felt worse, partly because they started 4-0 and partly because they were carved like Thanksgiving turkeys in their last two outings. They were beaten badly by UVA Wise at home last week when they were outscored 30-7 and out-gained 513 yards to 40.  They tried to regroup but didn’t find any answers before they traveled to Hickory. They allowed 567 yards to the Bears and they failed to score an offensive touchdown for the second straight week.

Newberry won the SAC title, while late-surging Lenoir-Rhyne (8-2, 6-2) finished tied with Wingate and Mars Hill for second place. Lenoir-Rhyne will find out today if it will be in the Division II playoffs. The Bears made a good case for inclusion on Saturday.

Lenoir-Rhyne quarterback Grayson Willingham enjoyed a magnificent day, completing 20 of 29 passes for 246 yards and three touchdowns. He wasn’t sacked or intercepted. He was good enough that WSAT, which normally honors an Indian, named him the player of the game. Willingham threw two TD passes in the first quarter, as the Bears established firm control of the game. They scored on their first three possessions.

Lenoir-Rhyne back Dwayne McGee had an equally auspicious afternoon. He romped 26 times for 206 yards. He was not tackled for a loss all day, and his efforts included a 65-yard jaunt. McGee broke the L-R record for rushing yards in a season with 1,594. Leonard Davis (1,559 yards) had held the record since 1994.

Dan Louba, a defensive lineman who starred at Hickory Ridge High, got to carry the ball once for the Bears and put it in the end zone from the 1-yard line.

The Bears won their sixth straight game. They haven’t lost a regular-season home game “between the bricks” since 2017.

Catawba’s lone entry on the scoreboard came on a 22-yard field goal by Clayton Crile at the outset of the second quarter. Crile also averaged 47 yards on three punts.

Denoris Wardlow, John Oxce, Jordan Gregg and Jeremiah Ferguson made eight tackles each for the Indians. Christian Campbell had two tackles for loss.

Backup quarterback Brandon Stewart’s 37-yard completion to Jaden Lockhart was Catawba’s most exciting play of the day, although it didn’t lead to any points.

Catawba netted 107 rushing yards, with Jyrea Martin getting 42.  The Indians had 145 passing yards, with Stewart accounting for 125. He was sacked twice and intercepted once.