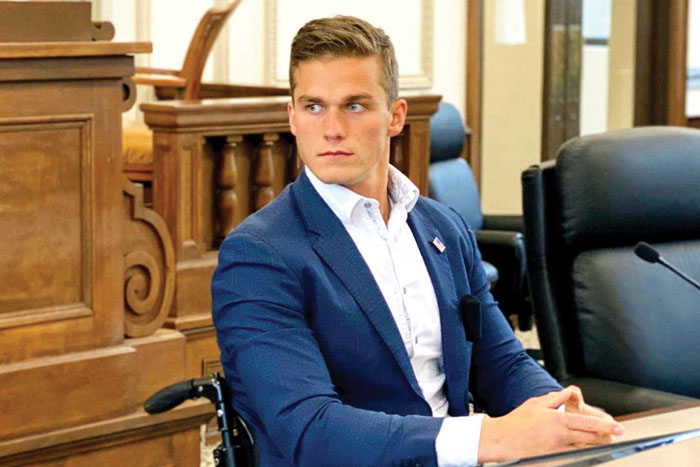 Madison Cawthorn participates in a debate at the Haywood County Courthouse in Waynesville. (Stephen Smith via AP, file photo)

His move to compete for a seat friendlier to Republicans could bolster his national profile and serve as a springboard to higher political office in a state slowly becoming more hospitable to Democrats.

The 26-year-old ally of former President Donald Trump announced his switch on Twitter Thursday night, casting it as an effort to thwart the bid pundits have expected from state House Speaker Tim Moore.

“Knowing the political realities of the 13th district, I’m afraid that another establishment, go-along-to-get-along Republican would prevail there. I will not let that happen,” Cawthorn said in the video. “I will be running for Congress in the 13th congressional district.”

If the congressional map holds up in court, the district is likely to be one of the safest wins for Republicans next year.

Shortly after Cawthorn’s announcement, Moore said he would not run for the congressional seat that had been drawn near his home and instead plans to seek another term as state House leader.

“I look forward to serving with my colleagues as Speaker of the House of Representatives and securing a supermajority for the Republicans next year,” Moore said in a statement, adding that “much of the speculation about my potential congressional candidacy has been driven by the media and political pundits.”

Moore told The Associated Press in a text message that Cawthorn’s announcement had “zero” role in his decision and that he had already determined to seek reelection to his current seat.

But one of his colleagues, Rep. Donny Lambeth, R-Forsyth, said Moore told him earlier that day that he had not yet made a final decision, though he was strongly leaning against a congressional run.

North Carolina is among a number of states that allow congressional candidates to run in whichever district they choose, so long as they reside in the state by the date of the general election.

Cawthorn doesn’t live in the newly formed 13th district stretching across the southwestern part of the state outside the city of Charlotte. He presently represents voters in the 11th, North Carolina’s westernmost district, where his Henderson County home would be in the 14th, one of three areas considered somewhat competitive for Democrats in 2022.

“This move is not an abandonment,” Cawthorn said to voters he will no longer represent. “In fact, quite the opposite. It is a move to take more ground for constitutional conservatism. In my heart, I represent North Carolina as a whole, not some arbitrary line that some politician drew this cycle.”

Looming over the March 2022 primary is a pair of lawsuits from voting rights groups accusing Republicans of partisan and racial gerrymandering in North Carolina. In a state where Trump narrowly defeated President Joe Biden with less than 50 percent of the votes, the GOP would likely hold 10 or 11 of the 14 districts up for grabs next year if the maps pass legal muster.

If Cawthorn wins the 13th, he would still represent about a third of the voters in his current district, since the new map moves all of McDowell and Polk and half of Rutherford County out of the 11th, said Chris Cooper, a Western Carolina University political science professor. Moving down from the mountains into the Charlotte media market also could elevate his political ambitions, he said.

“There is no way to separate the goal from the attention,” Cooper said. “The goal is the attention in so many ways for Madison Cawthorn. We’ve seen that from Day 1, and this is just another example.”

Cawthorn, who uses a wheelchair after he was partially paralyzed in 2014, has amassed several hundred thousand followers on social media by appealing to Trump’s most loyal base of supporters, making him one of the state’s most nationally visible lawmakers.

Since his political breakthrough in 2020, Cawthorn has faced criticism from Democrats and moderate Republicans for speaking at Trump’s rally shortly before the Jan. 6 insurrection at the U.S. Capitol. Since then, he’s encouraged North Carolinians to take up arms in advance of potential “bloodshed” over future elections he claims could “continue to be stolen,” falsely suggesting Biden’s 2020 win was illegitimate.

He’s bolstered his reputation by traversing the state to criticize how racial issues are taught in K-12 public schools, often making false or exaggerated claims of mass indoctrination.

During a Henderson County School Board meeting in September, Cawthorn allegedly brought a knife onto educational property.

The county sheriff’s office called the incident “unacceptable,” but declined to prosecute the congressman and instead issued a warning.

“North Carolinians don’t settle for the status quo. We defy it,” Cawthorn said in his video.