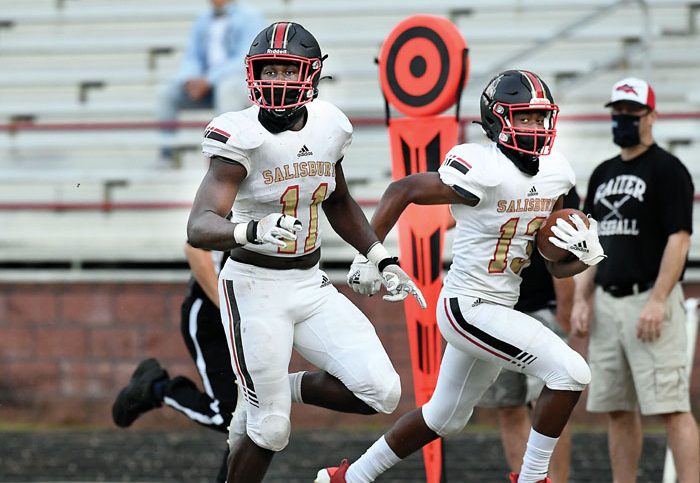 Salisbury's Deuce Walker (13) got things started with an interception Friday night and his brother Jalen Walker (11) also caught a touchdown pass in the victory. File photo by Wayne Hinshaw, for the Salisbury Post

They were sloppy on offense at times, but they were scary on defense all the time, and their forceful avalanche of a season continued in the second round of the 2A state playoffs.

“Give Bunker Hill credit. They played well. They came to play and they brought a crowd that gave them good energy,” Salisbury’s All-America linebacker Jalon Walker said.

The Bears (10-2) did all they could. No doubt about that. They brought speed and heart to Ludwig Stadium, but the Hornets (11-0) pressured them relentlessly on defense and big-played them on offense.

“We were able to put a lot of pressure on their quarterback, and that gave our defensive backs a chance to make some plays,” Salisbury head coach Brian Hinson said. “And we’ve got some guys who have a chance to score anytime they get the ball in their hands.”

It was the 10th running-clock victory for the Hornets, who notched their eighth shutout of a landslide autumn. They have smashed opponents at an unprecedented rate for a Rowan County program — 616-to-33 — and while they’re seeded only sixth in the 2A West bracket, they have a chance to win their second state championship of the calendar year.

It was Walker’s younger brother, Curtis Jr. — he answers to Deuce — who got the snowball started. Bunker Hill came out throwing on the first snap from scrimmage. Duece, a sophomore receiver/DB who is attracting college offers, picked the aerial off and transported it back to the Bears’ 18.

“I just made a play on the ball on the air and it turned out to be a good play by me,” Deuce said. “We were expecting them to throw it right away. That’s a passing team.”

Added Jalon Walker, “When we analyzed them, that’s a team that throws 70 percent and runs 30 percent. We’ve got a very good run defense, so we knew they’d have to throw it even more than they wanted to.”

After the younger Walker’s interception, it took the Hornets only two plays to grab a 7-0 lead. Geter scored the first of his three rushing touchdowns.

Bunker Hill went three-and-out, but got managed to get off an effective punt to the Salisbury 34. Geter fumbled a snap, but then turned a broken play into a 26-yard scoot. After Geter’s 31-yard completion to Jalon Walker, the Hornets were ready to score again. The Bears offered some resistance, but Geter put it in the end zone on fourth-and-goal, and it was 14-0.

Bunker Hill advanced the ball to the Salisbury 30, picking up three first downs on the way, but on fourth-and-long from the 33, Jalon Walker rocked quarterback Carson Elder and forced an incompletion.

Not long after that, Deuce got loose on a post pattern. Geter fired a fastball for a strike for the 38-yard TD, and it was 21-0, still in the first quarter.

“I had a one-on-one matchup, and Mike (Geter) just let it go,” Deuce said.

Geter had 202 passing yards on only nine passing attempts. He completed seven.

Bunker Hill back Chadz Stevenson ran the ball about as well as you can run it against the Hornets. He wasn’t going backwards, so he was exceptional.

“He ran it better than he looked on film,” Hinson said. “Good player.”

Salisbury DB Jayden Gibson turned a tipped pass into an interception and an adventurous runback to the Bunker Hill 7 to get things moving again. JyMikaah Wells got the touchdown that made it 28-0.

It appeared the Bears would get to halftime with that score, but Savion Freeman returned a punt 35 yards to the Bunker Hill 23 in the final minute of the half. Salisbury used a screen pass to score, with Geter putting the ball in the hands of wideout Kevin Williams. Wade Robins’ fifth PAT made it 35-0 at the break.

Despite the five-TD lead, the first half had included an unusual collection of bobbles, fumbles and near disasters on snaps by the Hornets.

“I’m not saying we didn’t play well, but there was a lot of stuff that needed to be cleaned up,” Hinson said.  “No doubt, we’ve got very talented kids who can make a big play even when some things go wrong, but there were too many times whenwe just didn’t execute the way we should. As a coach, you want your guys to get it right every time.”

When the Hornets came out for the second half, they scored immediately. Wells rambled 65 yards, his longest dash in a 1,000-yard season.

“We regrouped some at halftime and we wanted to finish strong,” said Wells, who rushed for 92 yards. “There were some good blocks on that play, but I still thought I was going to be tackled. Then I broke loose.”

Bunker Hill DB Elijah Boston had been coming up to make a lot of stops, but this time he didn’t. Then Wells was gone.

“It was a play we’d already run several times in the first half, but we blocked it better on the edge coming out of the half,” Hinson said. “We don’t account for the safety on that play, but Wells took it all the way.”

Robins’ PAT made it 42-0, and triggered a familiar sight at Ludwig Stadium this fall – a running clock.

The Hornets would strike for one more touchdown — Geter to Jalon Walker for 57 yards — for the last score of the game. Assistant coach Carson Herndon had suggested that Walker would get 1-on-1 coverage out of a particular formation, and Walker 1-on-1 on most high school players is going to be a touchdown. There’s a reason he’s committed to Georgia, and he knew he was likely playing for the last time on his home field. It will be another memory for him.

“If I get the ball in my hands, I want to score every time,” Walker said. “We had a lot of quick strikes tonight, and you can’t start a game any better than Deuce got us started. I’m proud of him.”

Salisbury’s defense finished the shutout this time. In the first round of the playoffs, North Forsyth got on the scoreboard on the last snap of the game.

Linemen Anthony Dodd, Nick Hall and Reed Fugle were among those turning in stellar outings.

Elder completed 13 passes for the Bears, but they netted only 67 yards, as the Hornets didn’t miss many tackles.

Next for the Hornets’ hurricane is Maiden, a very good team that won Bunker Hill’s conference and smacked the Bears 62-13 on Oct. 15.

So Salisbury will take its show on the road next week.

“We went to Maiden last year and won, and now we’ve got another business trip ahead of us,” Jalon Walker said.

The new RPI seeding system wasn’t Salisbury’s friend this year. That No. 6 seed hasn’t been popular with fans, but the Hornets haven’t complained about it.

They know what’s in front of them. They know Maiden is where things will start getting serious and where the margin for error will be greatly reduced.

“We’ve made a living on the road the last two seasons,” Hinson said. “Our guys enjoy playing on the road. We’ve had success at it. Hopefully, we can keep it going.”