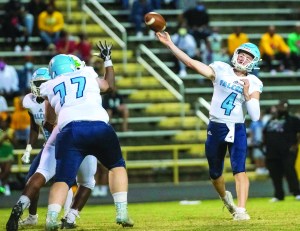 BOILING SPRINGS – Crest running back Mari Adams had four short touchdown runs, as the Chargers beat West Rowan 28-15 on Friday in a second round matchup in the 3A state playoffs.

Fourth-seeded Crest (9-2) scored touchdowns on three straight possessions and avenged two recent playoff losses to the Falcons, including a stunner in 2019.

West (7-4) moved the ball against the Chargers, but couldn’t finish enough drives with touchdowns.

With the aid of a faked punt, 20th-seeded West moved the ball 67 yards on the game’s opening possession, but the Falcons were stopped at the Crest 3 and had to settle for a 21-yard Juan Arteaga field goal and a 3-0 lead.

The Falcons stopped Crest’s first possession on downs at the West 44 and halted the Chargers in the red zone on their second possession. Jaedon Neal had a key tackle for loss.

Early in the second quarter, Crest quarterback Nytavius Huskey broke a long run to the West 13, and Adams scored from the 1-yard line for a 7-3 lead.

Cayleb Brawley had runs of 24 and 19 yards to give West another scoring chance, but Crest got the stop.

West struck back right before halftime, with Noah Loeblein connecting with Garrett Fesperman on a pass to the 1-yard line, and Akin Robinson putting the ball in the end zone. The PAT attempt failed, and the Falcons trailed 14-9 at the break.

Crest took the second-half kickoff and drove to score. Adams got his third touchdown from the 6 for a 21-9 lead.

After a West punt, the Falcons got a defensive stop, but Crest punted to the West 1 late in the third quarter, leaving the Falcons with 99 yards to travel at Sid Bryson Field.

Crest got the pivotal stop in the game on fourth down after West had driven from its 1 to the Crest 29.

West got a stop and struck quickly on Loeblein’s 76-yard pass to Peter Williams-Simpson, who notched a 1,000-yard receiving season. The PAT failed, and the Falcons were down 21-15.

But Crest answered with the clinching scoring drive. Adams scored from the 1.

West had five defensive stops in the game, but it wasn’t enough.

Jacobs and Xavier Harrell had tackles for loss for the Falcons.

Crest moves on to a home game against fifth-seeded North Davidson. The Black Knights edged Hickory 31-28.