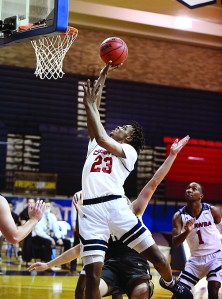 Catawba’s Caleb Robinson had  double-double. Photo by Wayne Hinshaw, for the Salisbury Post.

NEWBERRY, S.C. – Catawba’s men’s basketball team opened the season with an 81-69 victory over J.C. Smith at the Newberry Classic on Friday at Eleazer Arena.

The Catawba Indians got 21 points from transfer Ray Kowalski and a double-double of 18 points and 11 rebounds from Caleb Robinson in the win.

The Indians fell behind 15-8 early then used a 20-4 run to go up 28-19 with just under nine minutes left in the first half. Kowalski hit four of his five 3-pointers during that run. Catawba never gave the lead up after making that run.

The Golden Bulls pulled within one on a basket by Justice Goodloe with 16:17 to go in the game, but Catawba got a basketball by Ben Bowen and a 3-pointer by Kowalski over the next minute to lead 49-44.

Catawba put the game away over the final 10 minutes. An 8-0 run that included two baskets from Peyton Gerald and a three-point play by Robinson pushed the Indians up by a dozen with 8:36 remaining. The Bulls never got closer than seven after that.

The Indians shot 44 percent in the win and made eight 3-pointers. Trevion Lamar also reached double figures for Catawba with 15 points and Bowen added 13.

Xavier Jones led Johnson C. Smith with 19 points and 11 rebounds. Augustine Ominu also had a double-double with 17 points and 11 boards. The Golden Bulls shot 42 percent for the game, but made only three shots from behind the arc.

Catawba finishes up play in the Classic as it takes on UNC Pembroke today at 4 p.m.