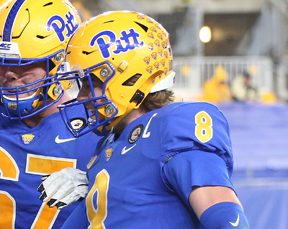 PITTSBURGH (AP) — Kenny Pickett hit Lucas Krull for an 11-yard touchdown pass in overtime and No. 25 Pittsburgh’s defense did the rest as the Panthers held off North Carolina 30-23 in the rain Thursday night.

Pitt (8-2, 5-1 Atlantic Coast Conference) kept firm control on first place in the ACC’s Coastal Division with two weeks to go after blowing a 16-point lead before collecting itself in overtime behind Pickett.

Pickett completed 25 of 43 passes for 346 yards with three touchdowns and an interception on a night he became the school’s career leader in passing yards. His dart to Krull in the middle of a downpour gave the Panthers the lead during the opening possession of the first extra period.

North Carolina (5-5, 3-4) attempted to respond but went nowhere on four plays, the last a fourth-down desperation heave by quarterback Sam Howell that was picked off by M.J. Devonshire. Howell passed for 296 yards with two touchdowns.

Pitt can earn its second Coastal Division title and trip to the ACC title game in five years if it wins out. The Panthers could also clinch with a victory over Virginia on Nov. 20 and any conference loss by Miami.

The Tar Heels were looking to beat a ranked opponent for the second time in five days. Yet the magic they summoned while knocking off a then-unbeaten Wake Forest last Saturday vanished in overtime.

The expected shootout between two teams featuring NFL-ready quarterbacks averaging a combined 80 points a game never materialized. Pitt and North Carolina struggled to reach half that total as Howell and Pickett spent a significant portion of the night under heavy duress.

The Panthers raced to a 17-point lead before the Tar Heels had a first down. Each of North Carolina’s first three drives ended in sacks and the Tar Heels allowed five in the first half as Pitt went up 23-7 behind Pickett.

The super senior threw for a pair of touchdowns and became the Panthers’ career leader in yards passing when he broke Alex Van Pelt’s mark of 11,267 with a 44-yard heave in the first quarter.

Yet Pitt also missed chances to blow it open. Sam Scarton missed an extra point, had a 54-yard field goal fall short in the tricky winds at Heinz Field and another field-goal attempt blocked.

The Tar Heels eventually made the Panthers pay. Howell found Antoine Green with a 23-yard touchdown pass in the third quarter to make it 23-13. Howell bulled his way over from 1-yard out on fourth down with 5:34 remaining to pull North Carolina within three. Pickett’s fourth interception of the season on Pitt’s ensuing possession set up Grayson Atkins’ tying 21-yard field goal with 57 seconds remaining to force overtime.

North Carolina: When the Tar Heels can protect Howell and get stops on defense, they’re dangerous. When they don’t, they’re a mess.

Pitt: The Panthers’ hope for the program’s first 10-win season since 2009 remains very much alive thanks in part to a defense that’s been hot and cold all season. Pitt found a way to make things difficult enough for Howell to build a lead and Pickett’s poise in overtime helped the Panthers avoid the kind of “Pitt being Pitt” loss that’s become a trademark of sorts for most of the last four decades.

The Panthers will stay in the polls though they will likely need some teams above them to falter over the weekend to make any sort of major leap.

North Carolina: Get a breather of sorts when FCS-opponent Wofford visits Chapel Hill on Nov. 20.

Pitt: Pickett will make his final appearance at Heinz Field — as a collegian at least — when the Cavaliers visit. Pitt has won four of its last five meetings with Virginia.