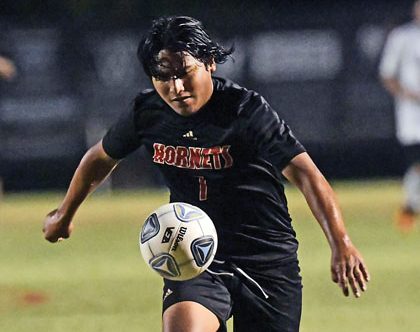 Officially, it was a  3-2 victory (with an asterisk) for the second-seeded and still unbeaten Wolves (20-0-3), who will host fourth-seeded Shelby in the 2A West regional final.

It was the final match for 10 Salisbury seniors.

Victory stayed just out of reach for the third-seeded Hornets (20-3) in a PK shootout session that they led 3-1 and 4-2. The Wolves ultimately won the shootout 6-5.

The match, played in wet and foggy conditions, stayed scoreless until Brayan Avilez scored on Charlie Graeber’s throw-in into the box with 11:30 remaining in the first half.

It appeared goalkeeper Wade Robins and Salisbury’s defense would make that goal stand up the rest of the way, but Lincolnton was awarded a penalty kick for a foul with four minutes left in regulation and converted.

Lincolnton went ahead 2-1 in the first overtime session on a PK, after Salisbury was called for a handball in the box.

The Hornets scored in the second overtime session. Again, it was a handball. Colin Donaldson converted the PK for the Hornets.

Neither team could break through in the sudden-death sessions.

In the shootout that followed, Salisbury’s David Austin and Will Webb converted PKs for a 2-1 lead, Then a save by Robins gave the Hornets a chance to take control.

Donaldson scored for a 3-1 lead. Bennett Clark converted for a 4-2 Hornets’ advantage. But with a 4-3 lead and a chance to end it, the Hornets missed.

Lincolnton evened the shootout at 4-4.

Avilez put Salisbury back in front 5-4, but Lincolnton answered.