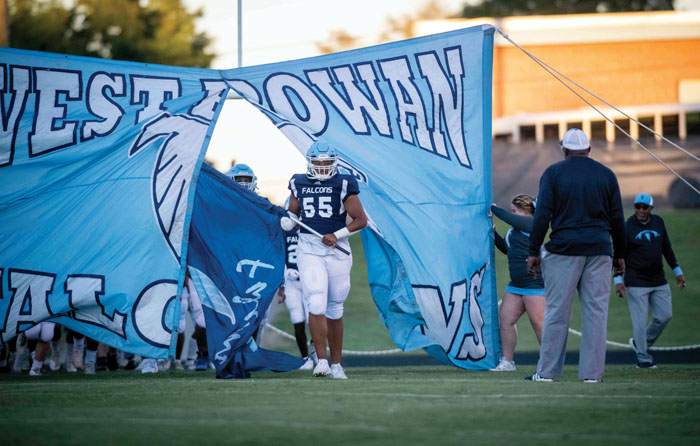 Josh Noble, leading the Falcons onto the field, will be playing for Campbell University next. JON C. LAKEY / FOR THE SALISBURY POST. 9/24/21, Mt Ulla,NC.

MOUNT ULLA — North Lincoln quarterback Kyle Kovalchuk amassed 265 rushing yards against West Rowan in the first round of the 3A state playoffs.

Had he gotten 266, the Falcons and the North Lincoln Knights might still be playing over at Pumpkin Center

“The quarterback was running the ball about every play, and on third down, they had run up the middle,” Noble explained. “So I was expecting them to try outside on fourth down. I blew up the guy blocking me and got to the QB when he was still in the backfield.”

Noble’s stop was one of the top plays of the season for the Falcons, along with Noah Loeblein’s run to win Friday’s thriller.

While his signature play came on defense, Noble, a Division I prospect, has worked tirelessly (along with OL coach David Melton) to lead a group of very young offensive lineman.

West head coach Louis Kraft said Noble was in the trenches for all but six plays during Friday’s struggle.

“I was tired,” said Noble, dragging out tired into a two-syllable word. “But it was fun playing both ways. If I’m needed for every play in the second round, I’ll be there.”

West (7-3) has been an excellent and multiple offensive squad, with QB Loeblein and backs Akin Robins0n and Cayleb Brawley teaming for nearly 4,000 yards in a shortened season.

Receiver Peter Williams-Simpson is closing in one of the handful of 1,000-yard receiving seasons in West history.

It’s very close to being a 50/50 offense that has been able to take advantage of whatever the opponent gives.

In other words, the offensive line, has gotten the job done whether the Falcons choose to move by land or by air.

“Those linemen have been a work in progress all year,” Kraft said. “That’s a very young group of guys, but they’ve gotten better every week.”

Added Noble, “I told our young guys early in the season that if we all work together, we can be a playoff team,” Noble said. “Here we are.”

Noble is the left tackle, the blind-side protector for his buddy Loeblein. The quarterback can move around, but he’s not a sprinter. Noble does his best to keep Loeblein from being smashed on his numerous passing attempts.

Junior right guard Brayden Haglan is a nice guy, but he plays with a mean streak.

“Hag kind of walks the line as far as being physical, even in practice,” Kraft said. “And when he pulls on Fridays, he’s coming at you with some bad intentions.”

Haglan agreed that pulling is his forte.

“I do love to pull and run with our backs and try to get them out in space,” Haglan said. “When we run it, I try to be very aggressive in the run game and I try to energize my teammates. But I also enjoy the challenge of pass-blocking. We’ve run and passed about equally well, and the offense definitely has improved a lot as the season has gone along.”

Right tackle is shared by Christian Hercules and Josh Wilson. One of them will move over to left tackle next season to try to fill the big cleats left behind by Noble.

Grayson Burleson and Robert Coleman are young players who rotate in on the offensive line.

Ben Sweet, a dangerous receiver when called on, and Jacob Perry are tight end/H-back types who are asked to block most of the time, so they’re honorary offensive linemen.

“The most amazing stat from our game on Friday has to be that we scored five touchdowns and they all were rushing touchdowns — which means we had some great run-blocking,” Kraft said. “I think a lot of people would have bet a million dollars that we couldn’t win a playoff game with zero passing touchdowns.”

Asked about how many of Friday’s touchdowns were run behind him. Noble had to think for a minute or so.

“Well, I believe all of them were,” he said modestly.

Noble has offers from Charlotte, Murray State, Wofford, North Carolina Central, Campbell and Lenoir-Rhyne, so his future is bright.

The future also appears bright for a West offensive line that will return four starters and key backups in 2022.

“We’ve all worked hard and we’ve all gotten a lot better since last year,” Noble said.