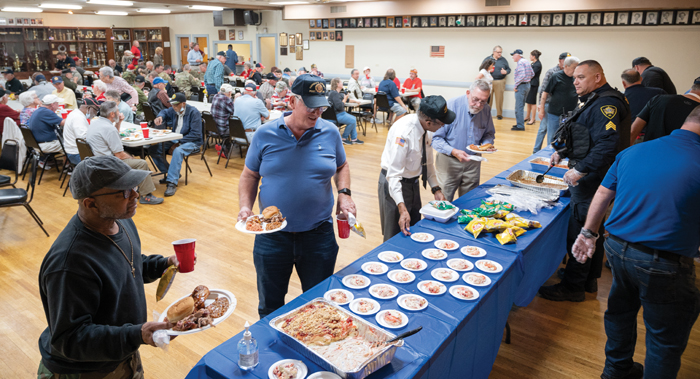 His final count? 380 cups used by veterans, spouses and other attendees for an annual veterans day luncheon hosted by Powles Staton Funeral Home, the Rowan County Sheriff’s Office and Register of Deeds. So, he guessed about 380 people attended the event.

“We are beyond pleased with the turnout,” Roakes said. “It’s a great way to thank our veterans.”

Started five years ago, the luncheon provided a hot meal for any veteran or spouse who wanted to attend at the Harold B. Jarrett American Legion Post on Lincolnton Road. Shortly after 11 a.m., friends and strangers filled the American Legion post for the complimentary meal.

In the crowd was Troy Horton, who was named Rowan County Veterans Council 2021 Veteran of the Year this week. 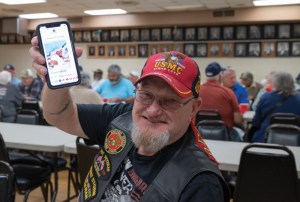 Josh Bergeron / Salisbury Post – Wednesday was a good day for Mike Catus, a veteran who attended the free lunch. Just a few hours prior to the lunch, his grandaughter Zoe was born.

Horton organizes the Frontier Coffee Shop Frontier Coffee Shop that meets Tuesday mornings at Christiana Lutheran Church on U.S. 52. After getting out of the U.S. Navy, he went a long time without associating with any veterans organizations partly because of the way people treated veterans after the Vietnam War.

Now, he’s about as busy as can be expected attending veterans events and organizing them. He enjoys the fellowship of meeting and talking to other veterans.

The feeling is mutual for Mike Catus, a Marine Corps veteran who’s known by the nickname Gunney and visited 38 different countries during his service. Catus was enjoying lunch Wednesday next to former infantryman Arthur Brown, who was drafted in 1968, served in Vietnam and left the service in 1970.

“It’s kind of like our therapy,” said Catus, who was also celebrating the birth of his granddaughter Zoe on Wednesday. She was born just three hours before the lunch.

Brown, who’s from Cleveland, said people are more appreciative today of veterans than the general public after Vietnam.

When people ask why Powles Staton and its partners host the annual luncheon, Roakes responds, “Why isn’t everyone?”