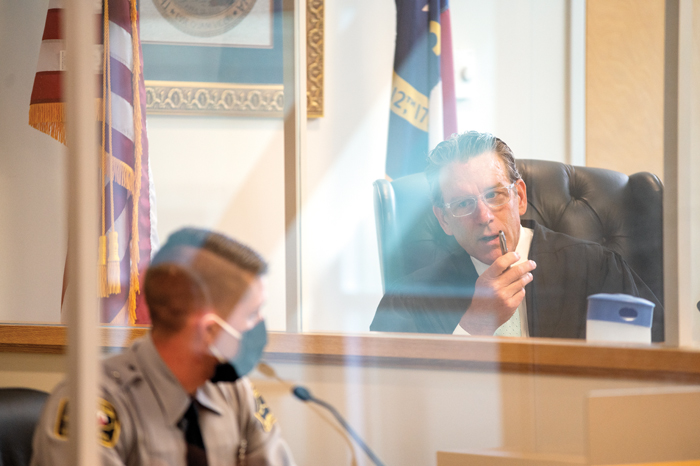 Salisbury Post file photo - Chief District Court Judge Charlie Brown talks to state Trooper J. Simmons during a DWI trial in May. Brown scheduled an entire week of DWI-focused court sessions because of a backlog identified by the state.

“The threat to public health required that we pivot from typical in-person court appearances during the pandemic,” Brown said. “In developing and utilizing remote court proceedings, we demonstrated that technology enables trial courts to fulfill their due process constitutional mandate while also enhancing security and reducing transportation expenses. Remote proceedings are a win-win.”

The new task force aims to create a standard, statewide process for using audio visual technology to conduct remote court proceedings for certain types of hearings. The task force will work to establish a pilot program between county courthouses and detention facilities, as well as implement a scheduling system to coordinate hearings. The mission also includes implementing a process for attorneys to effectively and confidentially communicate with clients who are housed in a detention facility.

Task force members should complete their work within a year, according to the N.C. Administrative Office of the Courts.

“I look forward to contributing to this effort to improve the efficiency of courts across the state,” Brown said.

Brown has more than 29 years of experience in the N.C. court system and was first elected to the district court bench in 1998. He has served as Rowan County’s chief district court judge since 2001. Brown also chairs the North Carolina Sentencing and Policy Advisory Commission, which evaluates the implementation of North Carolina’s criminal justice reform initiative, and serves on the Governor’s Crime Commission.

Previously, Brown served on the North Carolina Youth Accountability Task Force, created by state lawmakers to design a plan to raise the age of juvenile jurisdiction.