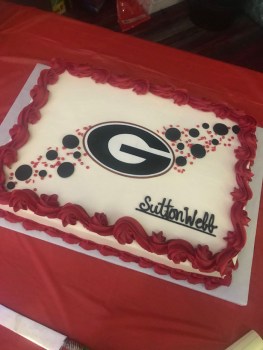 Mike London/SALISBURY POST PHOTO — Of the University of Georgia cake and other signing details, Sutton Webb’s coach Matt Parrish said, ‘She deserves every single second of this.’ 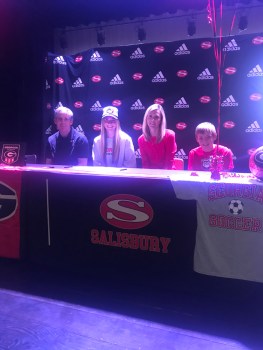 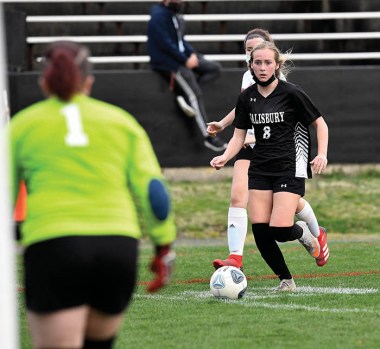 SALISBURY — Fifteen months elapsed between Salisbury soccer star Sutton Webb’s verbal commitment to the University of Georgia and her official signing day, but there were no detours, no second thoughts, no changes of heart.

With a casual wardobe that featured a Georgia sweatshirt and baseball cap, a smiling Webb signed on a stage in an auditorium that had made the easy transformation from Salisbury’s red, black and gold to the familiar red and black of the UGA Bulldogs.

“It’s all really special and I’m excited and a little nervous about signing,” said Webb, as friends, family and teammates filed in to wish her well. “Soccer is a game I started playing when I was 3,  and now I’m here. What I’m thinking about right now are all the years of work and all the sacrifices that were made to get here. But it was worth it. Hard work pays off.”

This was a different sort of feeling, watching one of his players sign with an SEC school, but it was one that made him gush with pride.

“To have a girl signing with Georgia is kind of the pinnacle for our program,” Parrish said. “We’ve had a number of girls go on to success after high school, but this is the biggest signing we’ve ever had.  Sutton has the opportunity to walk where no one who has played for us has ever walked. She’s writing her own story.”

Webb is an athlete who has tried just about everything at some point, including tennis and basketball.

She was the Rowan County Female Athlete of the Year for the 2020-21 school year as a junior because she added cross country and track and field success to her goal-creating and goal-scoring feats on the soccer pitch.

Soccer has been her top priority since fourth or fifth grade.

“I think what drew me to soccer was that it’s such a team game,” Webb said. “It’s fast-paced and competitive and there’s a lot of interaction with teammates. It’s easy to make friends when you’re on a soccer team.”

Georgia wasn’t the dream school when Webb first realized she had a chance to play in college, but Georgia coaches saw highlights of Webb and came to watch her club team play for three days when she was involved in a showcase tournament in Florida. Her speed and skills were special enough to get them intrigued. Scouting led to contact, and she liked the Georgia coaches. Contact led to an offer that excited Webb. That offer led to an early commitment and eventually to Wednesday’s signing.

Webb is proficient as a finisher with either foot. She combines speed and skill with a competitive mentality and she has surprising power for someone who doesn’t look physical at 5-foot-6, 110 pounds.

Webb broke out with a six-goal game as a freshman in the spring of 2019 that stamped her as a future phenom. She racked up 43 goals and 15 assists that season and was Central Carolina Conference Offensive Player of the Year.

Her sophomore season was crushed by the pandemic after three games. She was limited to three goals and four assists.

As a junior, Webb scored five goals in two different games, including a playoff match. She piled up 36 goals and eight assists in only 14 games and led the Hornets to a 12-2 season.  She was named Central Carolina Conference Offensive Player of the Year for the second time.

Even in a career that’s had two seasons drained by COVID, she’s scored 82 goals and dished out 27 assists.

Webb will be practicing with her club team in Huntersville today, but will be finished in time to make the short trip over to Lincolnton to support the male Salisbury soccer players in their fourth-round playoff match.

“It kind of shocked me in a good way when Jalon picked Georgia, too,” Webb said. “I was like, ‘Oh, yeah!’ I think it’s great. We’re friends. We’ve known each other since fourth grade.”

It was a good day for Georgia athletics on Wednesday. It will be an equally good one when Walker officially joins the Bulldogs.

Webb knows she may be destined to be only the second most famous Salisbury athlete in Athens, Ga., but she can live with that.

And she can smile about that.

Walker was on the practice field on Wednesday, getting ready for Friday’s second-round playoff action, while Webb owned the auditorium.

Wednesday was her day in the red and black spotlight. She earned it.

“As much as anyone ever has,” Parrish said. “The success she’s having, the accolades she’s receiving, it couldn’t happen to a better person. She deserves every single second of this.”