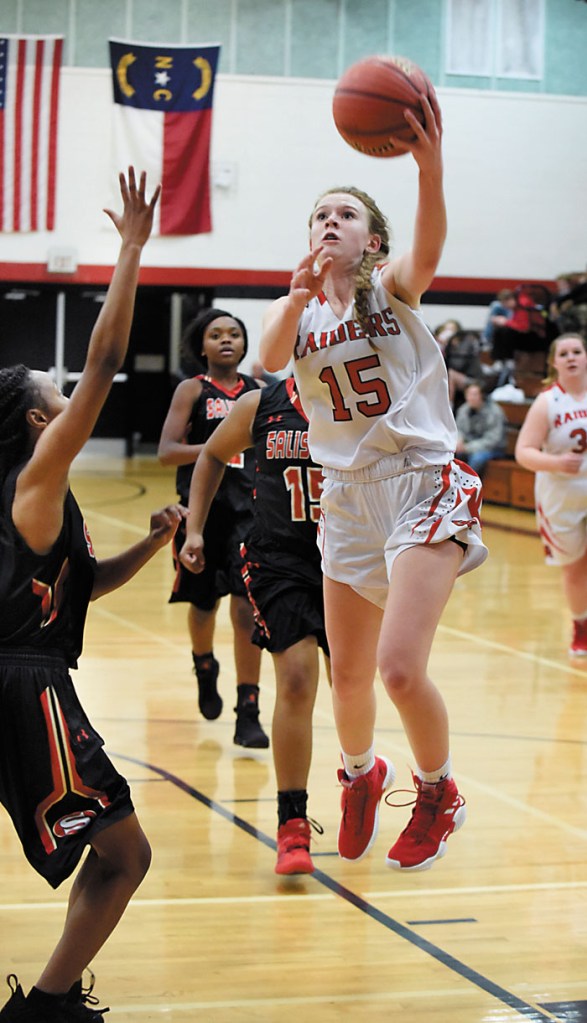 South Rowan’s Bethany Rymer is the only senior on the Raiders’ roster. Wayne Hinshaw/for the Salisbury Post file photo

This is the first in a series of high school basketball previews.

On the positive side, South’s defense quietly was getting tougher, trimming the average scoring by opponents from 56 per night down to 51.

Don’t be shocked if the Raiders have their best season in a while.

While they’re moving up from 2A to 3A, they could average 50 per game this season. They’ll have a lot more firepower and they should make fewer turnovers.

“Right off the bat, we’re way ahead of where we were last season,” head coach Alex Allen said. “We’ve got coachable girls, and they’re working well together. We’re getting better.”

Reasons for optimism in the South camp start with a return to basketball by Bethany Rymer. Rymer was the county’s No. 3 scorer as a sophomore with 13.9 points per game and scored 588 points in two varsity seasons.

She didn’t play as a junior, focusing on cross country, but she’s back on the hardwood as a senior. She gives coach Alex Allen another scorer and another ballhandler. It will be harder for teams to press South with Rymer in the lineup.

“The game is very natural for her,” Allen said. “She just joined us after cross country, but she’ll make a difference.”

Rymer will be the only senior on the roster.

The returning players are led by junior Mackenzie Chabala. She led South in scoring (8.1 per game) and rebounding (7.0) last season.

“She’s not very big for a post player, but she goes hard,” Allen said. “Always vocal, always a leader and always someone we can lean on. There will be nights when she carries us.”

Madilyn Cherry is a junior combo guard who was streaky last season. She got hot and scored in double figures several times, including the two that the Raiders won.

“Very good shooter and a good ballhandler and she’s got two varsity seasons under her belt now,” Allen said. “I won’t be surprised if she has some 20-point games.”

Guard Eden Childers and forward Abby Bruce also are in the junior class. Both played a lot last season.

Bryleigh Beaver and Thyhila Burris are juniors who are new to the varsity.

South  freshmen  Hannah Atwell and Kynlee Dextraze will start the season with the varsity. They were part of the championship team at Corriher-Lipe Middle School.

“They’re not typical freshmen, they’ve fit right in, and they should play a lot of minutes,” Allen said.

South will have a jayvee team, something that just about disappeared from the county last season. Some sophomores that were rushed into varsity action last season will have a year to develop on the jayvees. Tyler Rea, who coached the Corriher-Lipe girls, is coaching South’s jayvees.