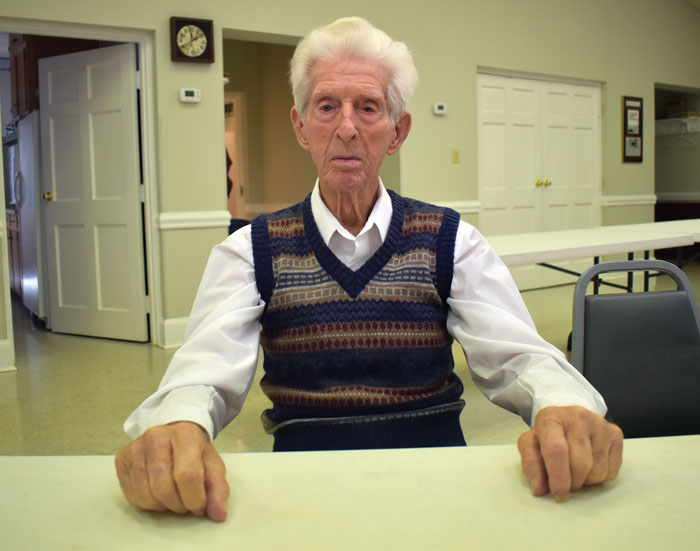 CLEVELAND — Just shy of 18 years old, Carl Lyerly needed his parents’ written permission when he left home in 1936 and enlisted in the U.S. Navy.

Lyerly didn’t know what to expect in the armed forces, but he thought whatever it was would be better and more exciting than toiling away on his family’s farm in northwest Rowan County.

The next decade of Lyerly’s life included two separate enlistments, brushes with famed military and political leaders and stops in countless foreign lands. Lyerly, now a sharp, white-haired 103-year-old, still remembers the adventures he experienced in the Navy.

Lyerly was born on Aug. 29, 1918 in Woodleaf — the fourth of 10 siblings. His father, Robert Jonathan, farmed a mix of corn, cotton and vegetables and sold his produce in Salisbury stores. Living in rural Rowan County when paved roads were few and far in between, Lyerly’s family was forced to be self-sufficient.

“If you worked, you lived,” Lyerly said. “If you didn’t work, you died. We had to raise our food. The only thing we’d buy would be coffee or sugar.

Even getting to school everyday was a task. With no bus to pick them up and drop them off, Lyerly and his siblings walked about two miles to class every morning and afternoon. There was plenty of hard work in Lyerly’s adolescence, but there were also pleasures as well — like the cooking of his mother, Bessie Ramsay Lyerly.

Her homemade recipes were delicious, and Lyerly missed them when he followed his older brother, Cecil, into the Navy during the interwar period. Before Lyerly went abroad, his first destination was Newport News, Virginia. Lyerly and his brother were then assigned to the U.S.S. Indianapolis when it was docked at the New York City Navy Yard.

The Indianapolis would be called on years later to transport parts of Little Boy, the atomic bomb that was dropped on Hiroshima. The ship was tragically sunk after delivering parts of the bomb by a torpedo fired by the Japanese Navy, resulting in hundreds of sailors losing their lives.

Lyerly wasn’t aboard the ship on that deadly 1945 mission, but he was on the ship in 1936 when it picked up President Franklin D. Roosevelt in Charleston, South Carolina. The Indianapolis was the Commander in Chief’s vessel for his “Good Neighbor” mission to South America.

When the Indianapolis docked in cities such as Rio de Janeiro and Buenos Aires, Lyerly and his shipmates had the opportunity to explore the mainland. Lyerly saw sights he never imagined, including what is now found in almost every office break room — a vending machine.

“They had these things that you’d put a quarter in and you’d get a piece of pie or a sandwich,” Lyerly said. “We didn’t get those here until years later. They had pipe music on the streets back then. All of those cities were beautiful.”

The Indianapolis delivered Roosevelt back to Charleston in December of the same year, but Lyerly stayed aboard the ship for most of his first military stint. The ship, which Lyerly said was “the fastest in the fleet,” was primarily stationed in Long Beach, California, during the interwar period. Lyerly remembers embarking on several trips during that time, including a few visits to Hawaii.

Lyerly enjoyed traveling with the Navy, but he didn’t love the discipline. At least, not when he’d just joined as a teenager.

“They were very strict,” Lyerly said.

On one occasion, after getting into a physical altercation with a superior, Lyerly found himself locked in the ship’s brig for several days. During his confinement, his brother would sneak him sandwiches from above that were dropped down on pieces of string. Lyerly didn’t make trips to the brig a frequent occurrence after that.

During his second year in the Navy, Lyerly was among the first people to march across the newly opened Golden Gate Bridge in San Francisco, which opened on May 27, 1937.

Lyerly was discharged in 1939 and started a family with his first wife, Delilah, an Iredell County native. They had two sons, Carl Jr. and Murray, before Lyerly was drafted back into the Navy in 1943 to fight in World War II. Lyerly would later have two daughters, Janice Estes and Marilyn Clements.

Although he was leaving two boys and a wife behind, Lyerly said he wasn’t nervous about reentering the military at a time when the world was gripped with war.

Marilyn Clements, his youngest child, didn’t hear about her father’s experience in the Navy until he was in his 90s. She now marvels at the nonchalant way he approached risking his life for his country.

“They were a different breed back then,” Clements said.

Lyerly served under General Douglas MacArthur in the South Pacific Theatre. He remembers being tasked with placing massive shells in battleship gun turrets that would fire the projectiles from 20-foot long barrels. The thunderous sound of the turrets firing, Lyerly said, are probably why he has two hearing aids today.

Although he saw action in the war, Lyerly is quick to remember the happy moments, like visits to the Galapagos islands and other Asian nations. He’d traveled around the world at that point, from Brazil to Italy, but the countries in the South Pacific Ocean were his favorite.

“I really enjoyed those islands,” Lyerly said. “They were beautiful.”

Even though Lyerly spent about a half decade total in the Navy, he was fortunate enough not to suffer any major combat or training injuries. The only time he has truly hurt himself, he said, was when he was 7 years old and accidentally sliced off his thumb in a corn sheller.

“I went through the war, before the war, then life and I never broke a bone, never hardly sick,” Lyerly said. “I’ve had a wonderful life.”

Lyerly’s love of travel stuck with him after he was discharged a second time in 1945 when the war ended. He returned to his home near Cleveland, but secured a job as a traveling cookware salesman for Towncrafte Homewares. He also sold sheet music to piano teachers and students for a time.

Despite his travels to places near and far, Lyerly said that North Carolina has always been his home.

Lyerly currently lives in Statesville with his daughter, Marilyn. He has 13 grandchildren and 24 great-grandchildren. Lyerly attends Abilene Church of Christ and enjoys walks.