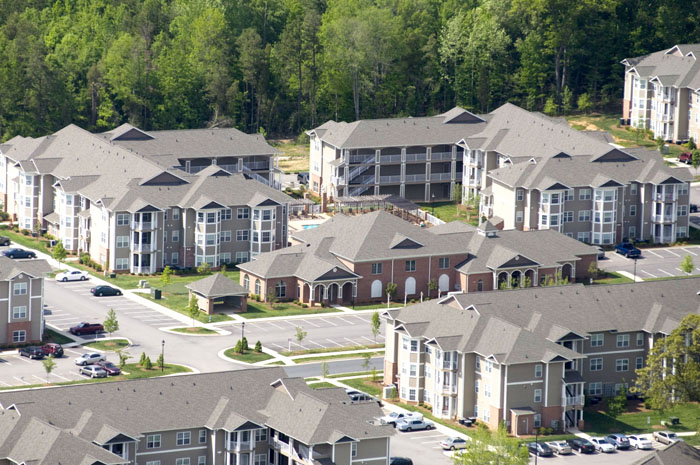 Phase two of The Grand on Julian will add 212 units to the apartment complex. File photo By Jon C. Lakey, Salisbury Post.

SALISBURY — The Salisbury Planning Board on Tuesday approved a rezoning request for the development of a 212-unit apartment addition to an existing complex at 1040 Julian Road.

The development will be the second phase of The Grand on Julian apartment complex, which was completed and opened in 2009.

The proposed second phase will be built on 13 acres of land with frontage on Julian Road, directly across from the Rowan Summit Shopping Center. The new phase will be connected to the existing complex behind the Rowan Rescue Squad Station.

The developer of the project, Barr Residential and Development, requested the rezoning of the phase two site from rural residential to residential mixed use with a conditional district overlay, which matches the zoning of the first phase.

Conceptual plans for phase two include eight three-story apartment buildings composed of 42 one-bedroom units, 110 two-bedroom units and 60 three-bedroom units. One of the buildings will have a partial fourth story below-ground level containing a single walk-out unit. There will be a community building, swimming pool and additional recreation open space and amenities. Plans show 394 parking spaces for the project.

“From my perspective, we have a piece of property close to I-85, across the street from shopping and dining and is reasonably close to jobs if you think about the industrial park and there’s another industrial park on the other side the county has,” Planning Board Member Bill Burgin said. “It looks to me that it’s a really pretty good match zoning wise and given the fact that we have a number of those apartments out there now, this would just supplement that. It’s exciting that the need is there when you start thinking about the growth and Salisbury and Rowan.”

Pat Iannelli, the architect for the project, said that phase two will have a similar look to the existing apartments.

“We are wanting to tie the styles and designs and colors and materials to phase one,” Iannelli said. “It won’t be an exact copy of that by any means, but they’re going to work together on a similar type look as you drive down Julian.”

Developers were interested in expanding The Grand on Julian due to the need for rental properties in the Salisbury community.

“There is demand for the product we will be building,” said Rich Rojek of Barr Residential and Development. “That’s not only seen in the market study but it’s also seen in what we have in phase one. In phase one, we have no vacancies and we have a wait list that extends well past the first of the year.”

Now that the Planning Board has recommended approving the rezoning request, it will be considered by the Salisbury City Council at its Dec. 7 meeting. If the rezoning request is approved by the Salisbury City Council, Rojek said the plan is to start on construction on phase two by this time next year, or perhaps slightly earlier.

• Salisbury Development Services Manager Teresa Barringer introduced the city’s newest planner, Elizabeth Burke. She recently graduated with her master’s degree from the University of North Carolina at Charlotte. With Burke on board, Barringer said the department is now fully staffed.

“We’re really excited,” Barringer said. “With the amount of development and the market, we really think Rowan County is a hot spot for development so we’re rolling up our sleeves.”