High school soccer: Hornets play on road Thursday in 4th round of 2A playoffs 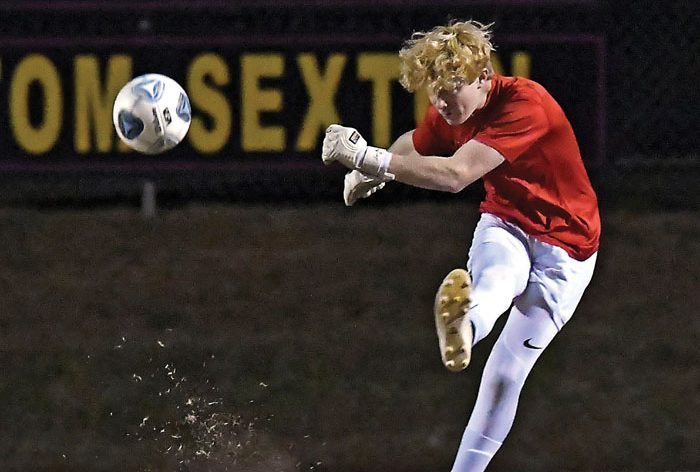 Senior keeper Wade Robins had 20 saves against Monroe. photo by Wayne Hinshaw, for the Salisbury Post

SALISBURY — You can call this one the regional semifinal or you can call it the fourth round.

Either way, Salisbury (20-2) is making another strong run in the 2A boys soccer playoffs.

The third-seeded Hornets, state champions in 2011, 2013 and 2015 under the guidance of coach Matt Parrish, have routed West Stokes, edged East Davidson and held off Monroe in the first three rounds.

Now they make the 50-mile trip to Lincolnton on Thursday to play one of the few undefeated teams left in the state. The Lincolnton Wolves (19-0-3) are the No. 2 seed. Game time is 7 p.m.

Soccer is a big deal in Lincolton.

“I’m told the whole town is shutting down for this one,” Parrish said. “They bring a ton of people to their games.”

No. 1 West seed Hendersonville is long gone from the playoffs.

Thursday’s other regional semifinal in the West pits No. 4 Shelby against upstart No. 16 seed Community of School of Davidson, which moved up from the 1A ranks this fall. It was CSOD that dispatched Hendersonville.

The significance of those seeds is that if Salisbury can find a way to win at Lincolnton, it will get to play the regional final at home.

The Hornets have battled East Lincoln, about 16 miles closer than Lincolnton, many times in the playoffs, but Lincolnton is not a familiar foe.

“My memory isn’t the best, so maybe Salisbury played them back in the (Tom) Sexton days, but I don’t recall us playing them,” Parrish said. “We do know they are a formidable opponent. They are undefeated for a reason and they did it against a tough schedule and high-quality opponents. We will be the underdogs.”

Lincolnton staged a relatively wild 3-2 victory over rival Lincoln Charter in the third round, surrendering two first-half goals, but has generally been suffocating on defense.

Lincolnton has outscored opponents 74-9 and has won 10 in a row.

The Wolves’ goals have come from everywhere, from 14 different players. Freshman Jesus Blanco-Tellez has 11 goals and 10 assists. Sophomore Aaron Lail has 10 goals and seven assists. Kevin Calvo, a senior, came up big against Lincoln Charter with two goals.

The Monroe match was the Hornets’ 10th shutout of the season. The Hornets, who lost to Ledford late in the regular season, own a modest four-game winning streak.

“With the right mindset and the implementation of a good game plan we should give Lincolnton a game,” Parrish said. “But we have to be prepared for a physical, balanced team.”

Salisbury has a team heavy with battle-tested seniors, including Brayan Avilez and Daniel Cuevas who delivered the goals against Monroe. Senior keeper Wade Robins had 20 saves against Monroe.  Seniors Will Webb and Colin Donaldson have provided much of the offense throughout the season.