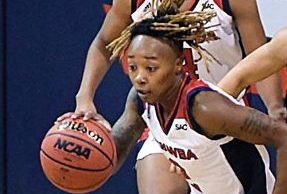 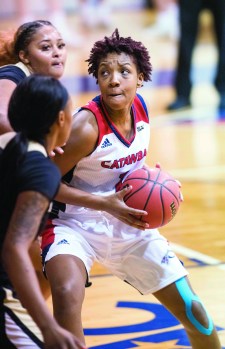 SALISBURY — Catawba’s women’s basketball team is expected to have an outstanding season and was picked second in the preseason South Atlantic Conference poll.

Catawba is coming off an 11-4 season that included a breakthrough regional victory. Head coach Terence McCutcheon brings back a deep, experienced roster .

Downs, who starred at South Rowan, made the All-SAC tourney team.

A.L. Brown grad Stanback is a preseason All-SAC pick. She had 22 points and nine rebounds in Catawba’s final game of the 2020-21 season.

Stanback, DeShazo, who has scored over 1,000 career points, and Ford were seniors in 2020-21 but are taking advantage of the universal redshirt for the shortened COVID season.

Freshman Janiya Foskey, who played in state championship games for strong Farmville Central teams, is an athletic 6-foot-1 recruit who should make a major impact.

Catawba plays two games this weekend at Belmont Abbey. The Indians play North Greenville on Friday at 7:30 p.m. and take on Belmont Abbey at 5:30 p.m. on Saturday.

The first home game is on Saturday, Nov. 20, against Tusculum.

Both games are at Indiana University of Pennsylvania.

The Blue Bears will play Seton Hill,  from Greensburg, Pa., at noon on Saturday and will take on IUP at 3 p.m. on Sunday.

Top veterans include guard Daijah Turner, who scored 11.4 points per game in 2019-20, and forward Victoria Onozie, who averaged 7.2 points and 5.8 rebounds. Onozie is on the preseason All-CIAA team.

Livingstone’s women will play at home on Nov. 17 against the University of Charleston.