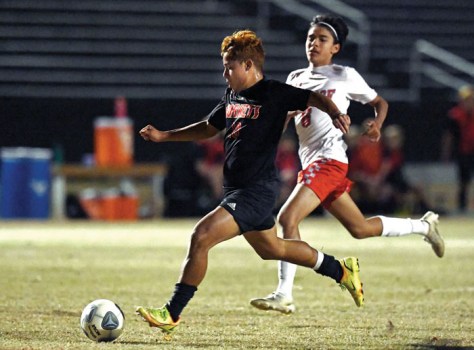 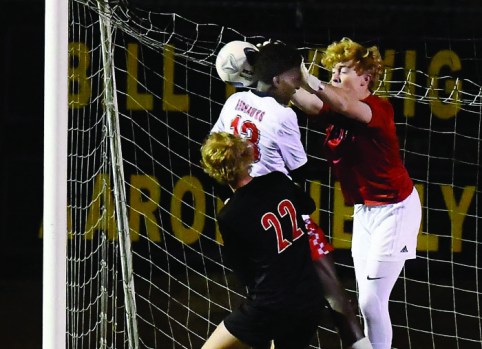 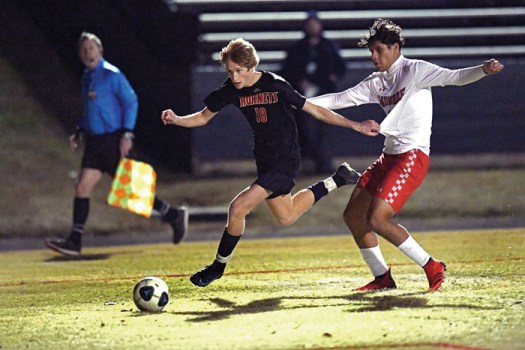 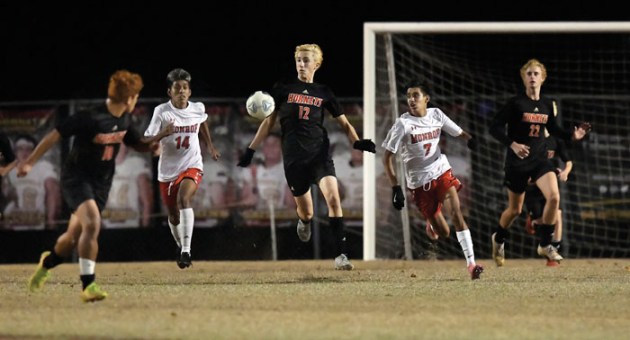 Soccer and other sports will now be governed by the State Board of Education and the North Carolina High School Athletic Association. File photo by Wayne Hinshaw for the Salisbury Post

SALISBURY — The formula was simple — work hard, stick to the blue print and make key plays.

Those attributes helped the third-seeded Salisbury boys soccer team survive Monday’s 2-0 third-round test-of-nerves against visiting Monroe, and take their place among last eight teams standing in the 2A state playoffs.

“We’re halfway there,” coach Matt Parrish said after the Hornets (20-2) earned a fourth-round match at Lincolnton on Thursday. “I feel a little proud. We had a very distinct game plan going in and that doesn’t always go particularly well for us. Tonight, we followed it right off the bat. We had a very clear idea of how we could score on this team — and we did it.”

Five days after trimming East Davidson in a fervent race to the finish line, Salisbury netted two first-half goals against the 11th-seeded Redhawks — then defended like Banshees, repelling wave after wave of Monroe attacks.

“They had a bunch of speed up top,” senior fullback Luke Graeber said, moments after SHS goalkeeper Wade Robins mastered his domain and logged the team’s 12th shutout. “It was just a matter of getting the ball out of the box and not allowing close-range shots. We forced them to shoot from 25-30 yards. They can have those all day.”

Robins seemed to agree. “I knew they were going to try to rip shots, because they don’t really have a threat inside the box, nothing that worried our defense,” he said. “As long as we controlled everything inside the 18, we knew we’d be all right.”

Monroe (12-10-1) carried the play for much of the evening, rifling 20 shots-on-goal to Salisbury’s 11, but never solved Robins and his defensive line — a bulletproof quartet manned by Mario Perez, Riley Dillon, Yatti Avilez and Graeber.

“We wanted to make them beat us in the run of play,” Parrish said, fist-punching one of his palms for emphasis. “No set pieces, no stupid fouls, keep your hands at your side, no hand balls. And if they do beat us that way, you tip your cap, especially with a two-goal lead. We were able to do just enough to prevent them from doing that.”

Salisbury jumped to a 1-0 lead just 9:50 into the match when striker Brayan Avilez — Yatti’s older brother — settled an ideal feed from Daniel Cuevas on the right side, shuffled the ball from his left foot to his right, and steered a shot past Monroe keeper Cristian Melchor.

“That goal, it boosted all of us up, but we continued to play like it was zero-zero,” Avilez said. “We had that same mentality beginning to end.”

Cuevas provided more detail. “The positioning and everything was perfect on that goal,” he noted. “Everyone was right where they were supposed to be. I think it surprised (Monroe). The first 20 minutes probably made them a little cocky and suddenly, they realized they were in a dogfight.”

Monroe’s troubles were amplified with 1:27 remaining in the opening half, when Cuevas gathered a loose ball near midfield and took off like a flushed deer down the left side. When he reached the top of the penalty area, he unloaded a laser beam of a shot that whizzed past Melchor’s left side.

“I saw two Monroe players converge on the ball, but there some miscommunication,” he said. “They both thought the other one would play it. I took it away from both of them and just kept going.”

Salisbury was outshot 10-4 in the second half, but its defense never broke. Yatti Avilez, a sophomore center-mid, was a here-there-and-everywhere defensive irritant.

“He reads the game as well as any player I’ve ever had,” Parrish crowed. “He tackles exceptionally well. He’s quick and fast — and they’re very different. He can hunt guys down from space, but in close quarters he quick enough to get in front of the shot crease and deflect balls out.”

Monroe’s best scoring chance came with 13:08 to play, when Victor Lopez chipped a 20-yard free kick from the right side well to the left of Robins’ cage.

“You always hope your team will be the better team,” Redhawks’ coach Hugo Tello said after Monroe’s seven-match winning streak was curbed. “You look at shots and we outplayed them. But that’s why it’s a beautiful game. The stats don’t always reflect the outcome.”

All they reflect is that Salisbury will play at No. 2 seed Lincolnton in the state quarterfinals.

“I just know that I was finally going to get a day off on Thursday,” Parrish said with a broad, post-game smile. “And now I’m damn glad that I’m not.”

NOTES: Lincolnton (19-0-3) advanced with a 3-2, third-round win against Lincoln Charter. The Wolves have won 10 straight and posted 15 shutouts, yielding only nine goals all season. … Monroe was given two yellow cards, both in the second half. The Redhawks had previously upset Bandys and Forbush in the playoffs. … Salisbury has won four consecutive matches and 16 of its last 17. … Brayan Avilez now has 15 goals and Cuevas has seven.