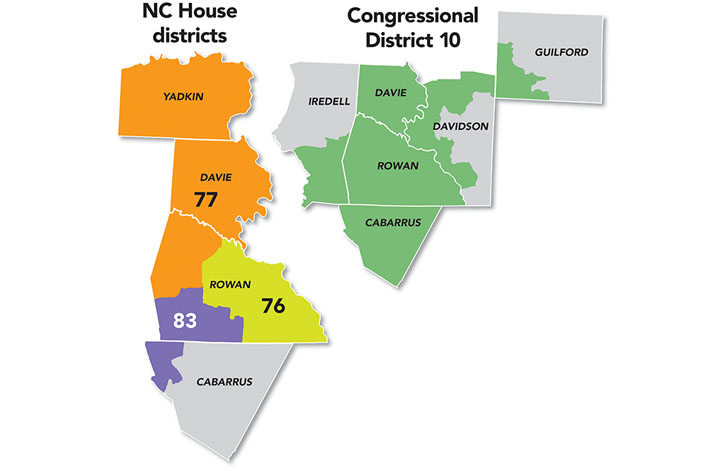 Following the release of 2020 Census data, legislators held a series of town hall discussions about the redrawing of state House, Senate and congressional districts for North Carolina. Last week, both the House and Senate approved the new maps, which will be in effect for the 2022 midterm election cycle.

In the new maps, District 76 appears to cover Salisbury, Spencer, East Spencer, Granite Quarry, Faith and southeastern Rowan County. The new District 77 would comprise the northwestern portion of Rowan County and all of Davie and Yadkin counties. Howard, however, is double-bunked in District 77 with Rep. Lee Zachary, a Republican who currently represents parts of Forsyth and Yadkin counties. So, she may be forced to compete with him in the 2022 elections.

District 83 will comprise the southwestern portion of Rowan County and the northwestern corner of Cabarrus County, and does not contain an incumbent. Rep. Larry Pittman, who currently represents District 83, is double-bunked with another Cabarrus County legislator in the new maps. So, the redrawn district will be open to any interested candidate in 2022.

The new maps show the district Sasser represents stopping at the county line, making it unlikely he’s in Rowan County’s delegation after the 2022 elections. Instead, he will represent a district that includes all of Stanly and Montgomery counties.

The North Carolina Senate map keeps Ford’s 33rd Senate District unchanged. If he runs for re-election and wins, he’ll be the state senator for Rowan and Stanly counties.

To reflect the population growth of the state, legislators also had to shrink existing congressional districts to make room for the 14th district, a new addition following 2020 Census data. The new maps move Rowan County from the 13th congressional district to the 10th Congressional District. The 10th also covers Cabarrus and Davie counties as well as parts of Iredell, Davidson and Guilford counties. While Reps. Richard Hudson and Ted Budd are double-bunked in the district, Budd is running for U.S. Senate. Hudson says he plans to run for the 10th District. Prior to redistricting in 2020, Hudson represented a swath of Rowan County.

“I have a proven track record as a conservative who knows how to get things done,” Hudson said in an emailed statement. “Working together, we can stand up to the radical, big government policies coming out of Washington, D.C., and work on solutions to grow our economy, defend our rights and get our country back on the right track.”

After the legislature approved the maps, an organization formed by Marc Elias, a prominent Democratic lawyer, announced Friday a group of voters who successfully challenged previous North Carolina maps are again suing in state court. The plaintiffs argue Republicans drew the new maps in a way that violates provisions of the state constitution.

Michael Bitzer, a politics professor at Catawba College, said he expected to see lawsuits about the latest round of redistricting. Bitzer said state suits are likely to focus on the partisanship of the maps and federal suits on the racial dynamics of the map. Despite requests from Democrats in the General Assembly to consider racial data when drawing the maps, Republicans have maintained that data isn’t necessary. A state Supreme Court ruling in the 2000s determined legislators have to consider racial dynamics when redistricting because of protections granted in the Voting Rights Act of 1965. The courts, Bitzer said, will determine “whether they adequately followed that dynamic.”

Bitzer said redistricting is “the most political activity in America,” and that whichever party has control will draw maps that benefit the party. Of the approximate 7,200 precincts throughout North Carolina, 70% are “landslide precincts,” meaning candidates win with 60% of support or more from voters. This shows voters “have pretty much sorted themselves,” which can be difficult when aiming for “fairness.” He added that the redrawn district for Rowan County overall favors Republicans 60/40, mirroring the voter makeup in those counties within the district.