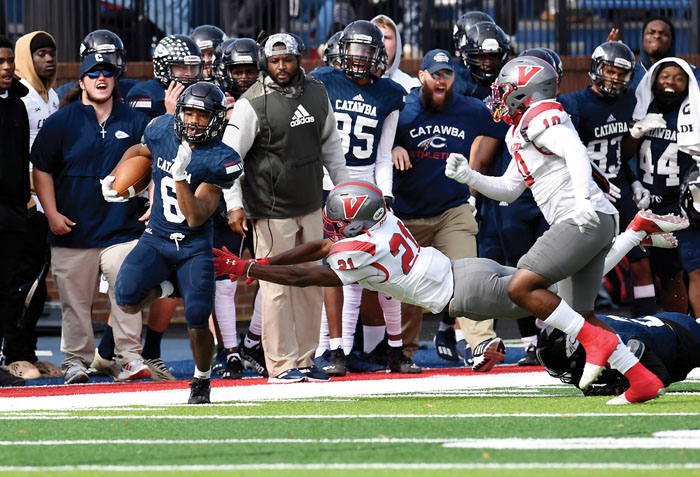 “They were hurt by how poorly we played, and that’s a good thing,” Walker said. “It shows how much they care.”

The Indians would relish bouncing back with a sharp performance to close out the season Saturday in Hickory when they take on Lenoir-Rhyne.

Kickoff between the bricks is at 1 p.m.

A good, competitive performance may be the best-case scenario. A win may be out of the question, as the Indians are 24-point underdogs.

Still, there will be plenty of incentive for them to show that they’re better than they looked last Saturday.

The defense possessed some fire early in the second half and had a three-interception day, including a pick-six, but basically the Indians never figured out how to stop UVA Wise on third downs.

Catawba’s program has been making a lot of small steps forward in the past year or so, but it took about five steps back on Saturday.

It would be easy to say it was a fluke, except the Indians (5-3, 2-3), who have lost three of their last four, weren’t good in the second half against Tusculum the week before UVA Wise. Catawba led that one 31-7 and had to hang on 31-28.

That’s six straight lackluster quarters, so getting back on track and playing well on Saturday is pretty critical to the state of the program.

It would be nice if Catawba was playing someone bad this week, but Lenoir-Rhyne (7-2, 5-2) is really good.

While the South Atlantic Conference title is going to be claimed by either Mars Hill (in the driver’s seat, but facing a tough road game at Wingate) or Newberry (eager to clobber Limestone), the Bears might be the best team in the league right now.

The Bears have won five in a row. They rolled 31-6 at Wingate. They’re the only SAC team that has beaten Mars Hill. But they dropped close road games at UVA Wise and Newberry early in the season.

This is only L-R’s fourth home game. The Bears won the previous three. Catawba has only played two road games and lost them both.

What makes Lenoir-Rhyne such a stout team is that it runs the ball extremely well (8th in D-II with 243.7 yards per game) and it stops the run almost as well (22nd in D-II. 95.8 yards per game).

L-R has the SAC’s top rushing offense, while the rushing defense ranks second behind Mars Hill.

Catawba will have to keep an eye on Deondre Lester, among other Bears.

Lester was dangerous on kick returns in last Saturday’s 56-20 romp against Barton and is the reigning SAC Special Teams Player of the Week. He also caught a touchdown pass.

Buddy Poole, voice of the Indians for decades, will be calling his last football game on WSAT.