Holiday 2021 issue of Salisbury the Magazine is now available 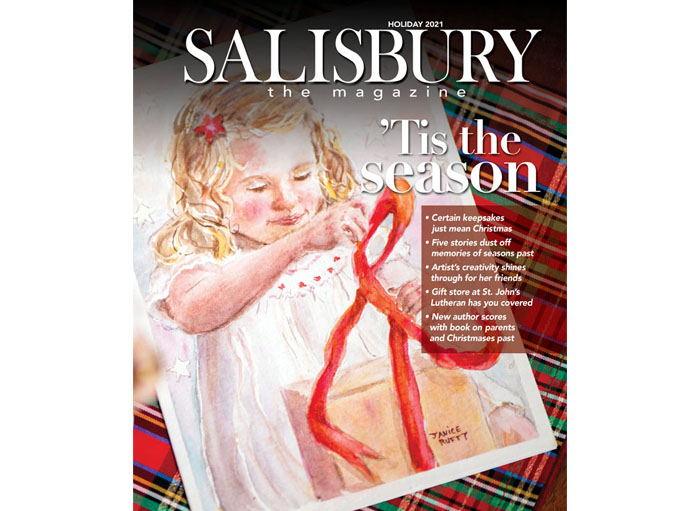 SALISBURY — The Holiday 2021 issue of Salisbury the Magazine, a publication of the Salisbury Post, has reached subscribers and is now available at its normal distribution spots elsewhere in Rowan County.

The Holiday issue’s cover features a greeting card painted by local artist Janice Rufty, who every Christmas sends cards of her original creations to friends. Inside, find a story about how Rufty, a retired teacher, found her second calling in watercolors.

Salisbury the Magazine readers assisted greatly in the Holiday edition by sharing some of the sentimental things — big and small — which carry a lot of meaning to them each Christmas season.

The magazine’s At Home section takes you inside and outside the home of Terry and Joe Ramsbotham, who have found their historic house for all seasons on East Bank Street. During the holidays, they even decorate a trackside Christmas tree for passing trains.

Contributing writer Deirdre Parker Smith writes about her editing work and collaboration with friend and first-time author Margaret “Chuck” Basinger. Basinger has used her late mother Belle Banks’ newspaper columns in the Mecklenburg Gazette as a launching point for a delightful Christmas memoir titled, ” ‘Tis the Season with Belle and Chuck.”

While the issue otherwise is filled with Christmas fare, contributing writer Kris Mueller and photographer Sean Meyers offer an inside look at the Frontier Coffee Shop lunches held Tuesdays for military veterans at Christiana Lutheran Church in Granite Quarry.

Every Tuesday is Veterans Day, thanks to the Frontier crowd.

Most of the Holiday feature stories showcase the photography of Meyers and Jon Lakey.

Salisbury the Magazine publishes nine times a year. A Winter edition will be arriving to subscribers in mid to late December.

County commissioners, sheriff’s race gets off to fast start on first day of filing