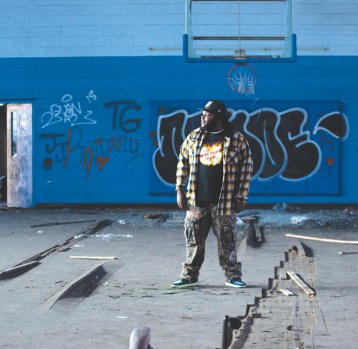 Josh Bergeron / Salisbury Post - Eric McCluney, known professionally by his rap name Eriq Trilly, poses for a photo inside of an abandoned basketball court at the former Dunbar center in East Spencer. McCluney is an East Spencer native and remembers attending summer camps at the school. 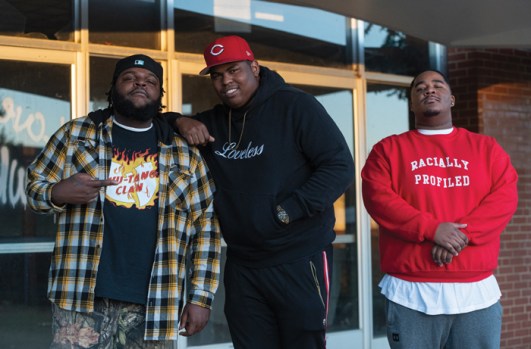 McCluney, known professionally by his rap name Eriq Trilly, was featured on the game’s soundtrack when it launched with his song “Fourth Grade Freestyle.” He initially was uninterested in a contest to be featured on the game when manager and longtime friend Geair Hendrick Jr. encouraged him to submit the song. Now, he views it as an accomplishment to build on.

“We’ve just been ridin’ with it,” McCluney said. “Honestly, I don’t even have a system or the game. So, for me, I guess it’s still surreal for me because I don’t play it every day. But it is real and people I talk to tell me that it’s the first song they hear when they cut the game on. … This is different. It’s really a different experience for me.”

His immediate goal: “I’m trying to go as far as this music will take me.”

His inclusion in the video game was followed by an invitation to be the opening act at the Fillmore Charlotte, a popular venue housed in a historic textile mill. He’s also receiving an average of 15,400 monthly listeners on Spotify. Most are listening to “Fourth Grade Freestyle.”

In his music, McCluney talks about moments during his life as well as adult themes. All of his songs carry an explicit rating. On the chorus of “Fourth Grade Freestyle,” McCluney raps:

I’ve been ballin’ since the fourth grade

Fubu T-shirt with the rope chain

My granny was singin’ in church …

My grandpa was deep in the dope game

My uncle was gettin’ that work in

My auntie was getting an education

And my daddy my hustlin’ work then

Livin’ life is such a dirty game

Livin’ life is such a dirty game

McCluney, 29, went to North Rowan schools until moving to Charlotte with his dad and enrolling Independence High School. After graduation, he went into the workforce before enrolling at Livingstone College in 2011 — about the time he put out his first mixtape on the website Soundcloud. He took classes at Livingstone off and on until 2016 — when “life happened” and he moved to South Carolina with his mom. McCluney and Hendrick, who have known each other since attending Kiddieland Kindergarten together, reconnected in 2017 and started getting serious about making music.

In 2019, he was admitted to Holly Hill Hospital in Raleigh, which provides mental health services, and stayed there for three weeks. In school, he often wrote down his thoughts when he struggled with anger issues. He did the same at Holly Hill, which is where he first wrote “First Grade Freestyle.”

The chance to place the song on NBA 2K22 came from United Masters, a music distributor based in the United States that Hendrick often uses. Hendrick hoped the “ballin’ since the fourth grade” phrase in the song would give them a higher chance than other competitors at catching the judges attention.

“Playing basketball, and ballin’ since the fourth grade, I was just thinking, ‘This might hit,'” Hendrick recalled. “And the people I’ve been hearing on NBA 2K lately haven’t been sounding too good. So, we just figured we’d take our chances. What’s the worst that can happen?”

Since making it on the game, McCluney feels closer than ever to gaining major public attention for his music, particularly because the featured song on NBA 2K22 has brought encouraging messages from strangers.