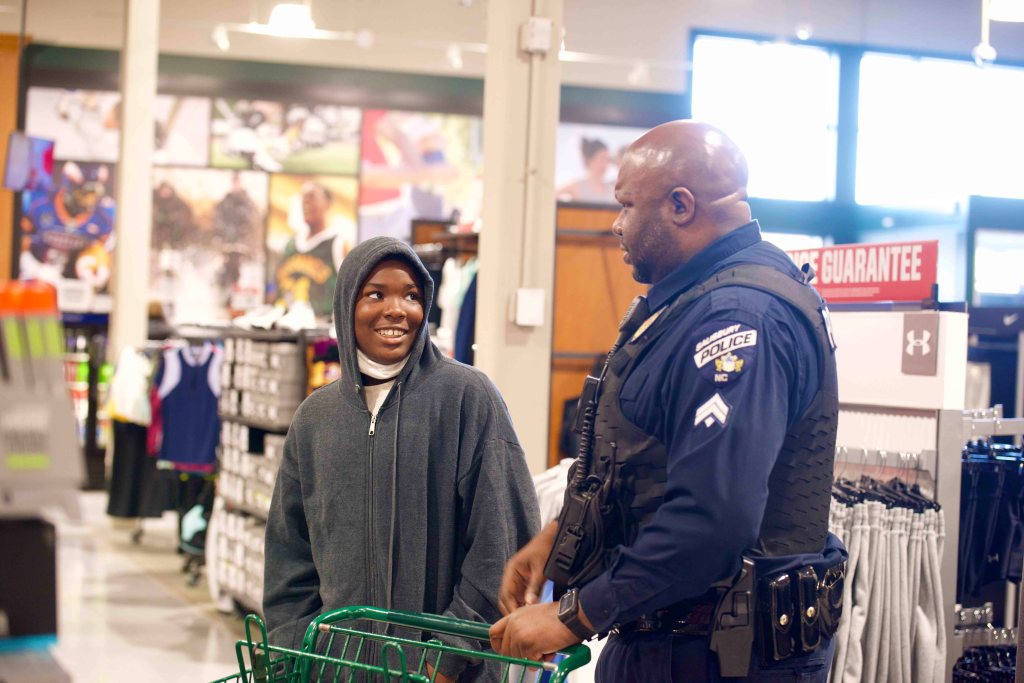 SALISBURY — A half-dozen police vehicles lined up in front of Salisbury’s Dick’s Sporting Goods on Saturday, but there was no emergency.

Inside were nine students and school resource officers picking out new gear, free of charge. It was the first time the location hosted local officers and students for a “shop with a cop” event.

The program was coordinated by the Rowan County Sheriff’s Office. Deputy Ryan Walker said he contacted resource officers at the county’s middle and high schools for some recommendations. The goal was to select some student athletes whose families may be struggling during the pandemic.

There were originally 10 students who would be shopping on Saturday, though one backed out at the last minute. Kids had a spending limit, but the store was OK with them going a few dollars over. Dick’s Sporting Goods also threw in some extra balls and other items.

Dick’s Community Marketing Manager Wade Leaphart said the company has been holding “shop with a cop” and “shop with a pro” events for years now. Walker said the Sheriff’s Office partners with Walmart for a “shop with a cop” event closer to Christmas. Last year, that event was virtual, but it will be back in person as well.

Vamara Jabateh, an eighth grader at West Rowan Middle School, was taken aback that he had $100 to spend on gear. He plays football and soccer. He picked up some essentials like athletic clothes and a water bottle. Some of his picks were for his younger siblings.

“I was not expecting to be that lucky and win a $100 gift card,” Jabateh said.

Danny Lindley, the school resource officer at West Rowan Middle, said he participates in events like Saturday’s every year.

“A lot of kids, you would think, would go there and get things for just themselves, but they don’t,” Lindley said. “They think about their parents and siblings. It’s heartwarming.”

Lindley said the difference between interacting with kids during shopping events and during the school day is the number of students.

“You don’t get time to talk to just one person a lot,” Lindley said, adding Jabateh was recommended by every coach he asked.

Brooklyn Henderson, an eighth grader at Knox Middle School, said it was a surprise to him as well. He was shopping for boxing gear. Henderson said he enjoys boxing, and one of the things he likes is the potential for it to pay a lot of money.

Knox school resource officer Isaac Miller said he enjoys giving back to the youth and sees kids give back to their families through other shopping programs, but this program lets them get some gear for themselves.

“It’s a great opportunity for them to see us outside of school, outside of law enforcement,” Miller said.