College football roundup: Deacons unbeaten no more as Heels come back from being down 18 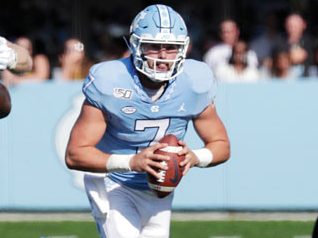 CHAPEL HILL — For the second straight year, Wake Forest couldn’t protect a big second-half lead at North Carolina. This time, though, it likely cost the 10th-ranked Demon Deacons any chance of playing their way deeper into the College Football Playoff race.

Ty Chandler ran for career highs of 213 yards and four touchdowns and North Carolina overcame an 18-point deficit to beat Wake Forest 58-55 on Saturday, handing the Demon Deacons their first loss in a nonconference matchup of Atlantic Coast Conference teams.

It ended with the unusual sight of Tar Heels fans storming the field to celebrate a win against their instate foe, though not one that will count toward the league standings.

“I’ve told them: every Saturday you build memories,” Tar Heels coach Mack Brown said. “That’s what you do. And this is a game that they will remember for the rest of their lives. And I’m really, really proud that my name is associated with them.”

Chandler’s big day included a 50-yard breakaway run with 1:12 left to make it 58-48. That was the final blow for the Tar Heels (5-4) in rallying from a huge third-quarter deficit to beat the Demon Deacons (8-1, No. 9 CFP) for the second straight year, following a 21-point comeback last year by erasing a 45-27 deficit with 7:38 left in the third.

The Tar Heels felt it too, even down big.

“What we were saying on the sidelines is: we’ve been here before,” UNC quarterback Sam Howell said.

The loss doesn’t impact the Demon Deacons’ pursuit of their first ACC title since 2006 since it was part of a home-and-home nonconference series announced in 2015 with the schools not meeting as often amid the expanded ACC’s scheduling model. But the goal Clawson mentioned after last week’s rout of Duke — being in the playoff discussion — is likely gone.

“We just, we weren’t sharp,” Clawson said. “You say that and we scored 50-something points. But we weren’t as sharp as we needed to be. We certainly played well on offense and scored a lot of points, but with as well as North Carolina played, we had to be a little bit better. And we weren’t.”

Hartman threw for 398 yards and five touchdowns and ran for 78 yards and two more scores for Wake Forest. A.T. Perry and Jaquarii Roberson each hauled in a pair of touchdown grabs to lead a 615-yard effort from the offense.

But that high-scoring unit, one of the best of the Bowl Subdivision, stalled at a critical time with three straight empty drives. And it came against a much-maligned defense that had struggled to show many tangible signs of improvement this season, a key piece of UNC’s struggles in going from ranked No. 10 in preseason to unranked before October.

Howell threw for 216 yards and a touchdown and ran for 104 and two more scores in a matchup of high-profile quarterbacks. And the Tar Heels scored on their last five full drives, four for touchdowns.

“We were just breathing life into each other and encouraging each other and keeping it going,” Chandler said, adding: “That’s what it came down to: just being able to respond. And we did a great job of that.”

Wake Forest: The nightmarish repeat of last year’s game ended with a similar final score (59-53) and also featured injuries in the secondary that wore on the Demon Deacons as the game went on. That made it even tougher to slow the Tar Heels as their offense picked up momentum.

North Carolina: The stops were a huge development. There was Cam Kelly’s second interception of Hartman with 10:40 left to set up a touchdown. There was a batted-down pass from Ray Vohasek at the line on fourth down on the next drive, followed by another fourth-down incompletion after Grayson Atkins’ go-ahead 25-yard field goal with 2:12 left. It all came with top linebacker Jeremiah Gemmel ejected for targeting at the end of the first quarter, too.

The Demon Deacons are set to tumble, both in the next AP Top 25 and the next CFP rankings.

Howell passed Marquise Williams (10,423) for UNC record for career total offense in this one. The 55 points marked the most allowed by UNC in any win, surpassing last year’s total of 53 against Wake Forest.

Wake Forest: The Demon Deacons begin a closing stretch of three straight league games that will determine whether they win the Atlantic Division race, starting with next Saturday’s visit from North Carolina State.

North Carolina: The Tar Heels have a short week and visit Pittsburgh on Thursday in what will be another high-profile quarterback matchup with Kenny Pickett.

Pickett threw for 405 yards as the Panthers (7-2, 4-1 Atlantic Coast Conference, No. 25 CFP) bounced back from a home loss to Miami. Sam Scarton kicked four field goals on his 21st birthday for Pittsburgh, which leads the ACC’s Coastal Division and improved to 4-0 in road games.

Duke (3-6, 0-5) lost its fifth game in a row. Quarterback Gunnar Holmberg exited with an upper-body injury on the team’s final possession of the first half after throwing for 174 yards and a touchdown.

Malik Williams caught a lateral from Chase Brice and fired a 34-yard rainbow down the right sideline to Thomas Hennigan, who was so wide open he skipped into the end zone with the game’s first score.

Benjamin was left wide open over the middle at midfield and he easily raced into the end zone. The Catamounts held Furman scoreless in the fourth quarter, including the Paladins missing a 62-yard field goal as time expired.

Rogan Wells was 22-of-33 passing for 386 yards with two touchdowns and two interceptions for Western Carolina (3-6, 3-3 Southern).  Dominic Roberto scored four touchdowns on the ground, while rushing for 196 yards for Furman (4-5, 2-4).

Hampton 27, Gardner-Webb 21 (OT): Keyondre White scored the game-winning touchdown on a 25-yard run in overtime to help Hampton beat Gardner-Webb. After Gardner-Webb failed to score on the opening drive of overtime, White bounced outside with the help of a key block from quarterback Jett Duffey and reached the end zone for the third time this season.

Villanova 35, Elon 0: Daniel Smith accounted for five touchdowns as Villanova routed Elon. Smith was 16-of-23 passing for 238 yards with a touchdown pass to three separate receivers. He added 45 yards on the ground that included two scores from short yardage.

Joseph Stuckey intercepted a pass near midfield to secure the game with 1:27 to play for the Aggies (4-5, 3-3 Big South). Kyris Barnett and Jack Chambers had rushing touchdowns for the Buccaneers (3-5, 2-4) in the fourth quarter.