College football: A dismal day for the Indians 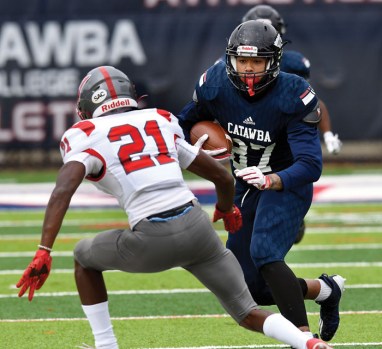 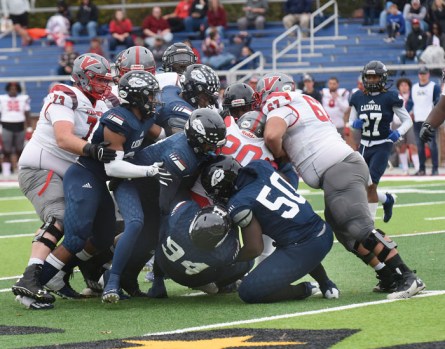 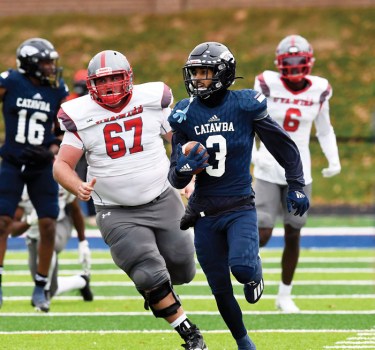 Catawba's Isaiah Taylor 3 makes an interception in the endzone and run it up the sideline. photo by Wayne Hinshaw

Catawba's QB Ken Avent 9 looks for a receiver with the new scoreboard video in the background. photo by Wayne Hinshaw 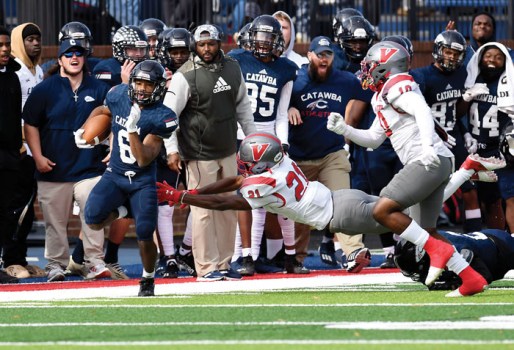 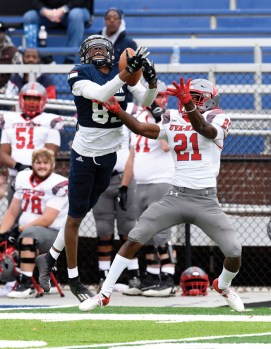 Catawba's Brandon Thomas 85 had this pass in his hands but could not hold on. Michael King 21 defends. photo by Wayne Hinshaw

SALISBURY — The only direction in which the Catawba Indians can go is up.

Catawba’s football team laid an egg on Saturday with a performance that was a zero on a scale of 1 to 10. In a 30-7 South Atlantic Conference setback, the Indians made UVA Wise (5-5, 4-4) look like UVA had come to town.

The Indians came up with three interceptions, including a pick-six by safety Denoris Wardlow, but that’s where the positives ended unless you wanted to talk about Clayton Crile’s punting, which included a 72-yard bomb. Unfortunately for the Indians, Crile was way too busy. He punted nine times.

The loss itself wasn’t a shock — Catawba was only slightly favored at Shuford Stadium to beat the Cavaliers— but the magnitude of the defeat, especially at home where Catawba had been 5-0, was stunning.

“We just didn’t play well, not well at all,” Catawba head coach Curtis Walker said. “They found something in our offensive scheme they could exploit and they handled us.”

“Handled us” is putting it as politely as possible.  Catawba threw for a meager 41 yards and had minus-1 rushing yards on 22 attempts.

Catawba was 0-for-13 on third-down conversions, which may be a record. Plus 0-for-2 on fourth down. The Indians (5-3, 2-3) made four first downs, a program record for UVA Wise’s defense.

Meanwhile, UVA Wise’s offense was 11-for-22 on converting third downs, a lot of them third-and-longs, and was 4-for-5 at converting on fourth down. Catawba’s defense couldn’t get off the field.

It always was second-and-9 or second-and-11 for the Indians, and in obvious passing situations, the Cavaliers got after Catawba QB Ken Avent III. He was sacked three times, and one was a sack/fumble disaster that sealed the Indians’ fate. Even when he didn’t get hit, Avent was constantly pressured, hurried and harassed. He ran for his life.

UVA Wise QB Lendon Redwine is nowhere near as mobile as Avent and has been sacked more than any QB in the SAC this season. Catawba pass-rushers nailed Redwine five times — John Oxce got to him twice — but Redwine can sling it. He threw for two early touchdowns and for 330 yards and shook off three interceptions.

“Their quarterback doesn’t move much, but they run quick curls and outs and he gets rid of the ball quick,” Catawba linebacker Christian Bennett said. “We just beat ourselves with penalties and with blown assignments today. We didn’t get the job done.”

Catawba needed a goal-line stand to limit UVA Wise to a 17-0 lead at halftime. Catawba’s first-half stat sheet showed 52 yards gained, three first downs and six punts. It didn’t seem possible, but things would get even worse offensively in the second half.

It became 17-7 very suddenly in the opening seconds of the third quarter. Wardlow intercepted Redwine and basically turned into a running back. He housed it from 39 yards out. As Wardlow zoomed into the end zone, there was a roar from the crowd and there was a feeling that Catawba could come back.

Then Catawba’s defense went back out and forced a punt. Catawba’s offense took over with good field position at the Catawba 45, and this was clearly the Indians’ chance to make a move. A face mask penalty advanced Catawba to the UVA Wise 43. But on third-and-10 from there, Chavon Fields blew into the Catawba backfield and popped Avent. The ball came loose, and Fields recovered for the Cavaliers. He returned the ball to the Catawba 32.

Running back Jaevon Gillespie did most of the work from there. UVA Wise pounded in the short-field touchdown, and it was 23-7 with 10:13 left in the third quarter.

Catawba enjoyed only a few good moments after that. Crile’s 72-yard punt pinned the visitors back at their 3-yard line, but they climbed out of that hole.

A Dorrien Bagley interception looked for a moment to be another huge play for Catawba, but that pick was wiped out by a flag for pass interference.

Izaiah Taylor intercepted Redwine early in the fourth quarter and returned the ball past midfield, but when the Indians went four-and-out (a trick play with Avent on the receiving end of a pass lost 7 yards), it was all over.

‘We’d get a little momentum, and then we’d do something to hurt ourselves every time,” Walker said.

UVA Wise piled up a lot of its 183 rushing yards in the fourth quarter, chewed the clock and tacked on a touchdown with 1:56 remaining for the final margin.

“We’re going to search hard for some answers in the week ahead,” Walker said.

Catawba will finish the season next Saturday at Lenoir-Rhyne. UVA Wise will take on Barton.