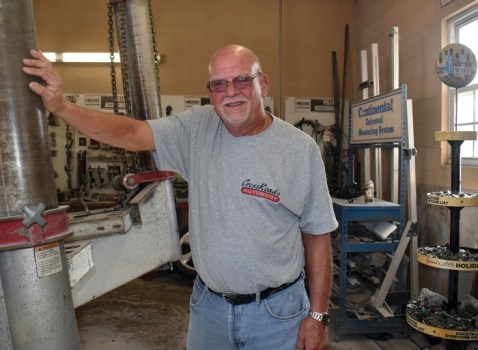 Neil Lefler took out a home loan to build Neil's Paint and Body Shop in the 1980s. The gambit paid off and the shop has served customers for 35 years. Ben Stansell/Salisbury Post 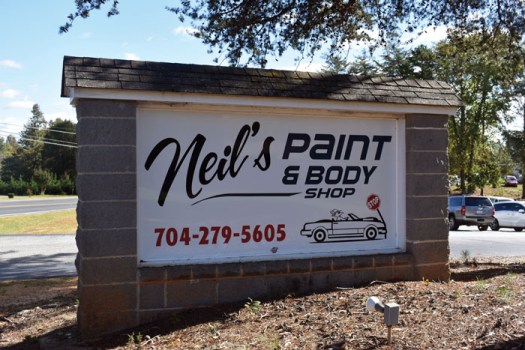 Neil's Paint and Body Shop in Faith has been a go-to place for people with damaged cars for decades. Ben Stansell/Salisbury Post 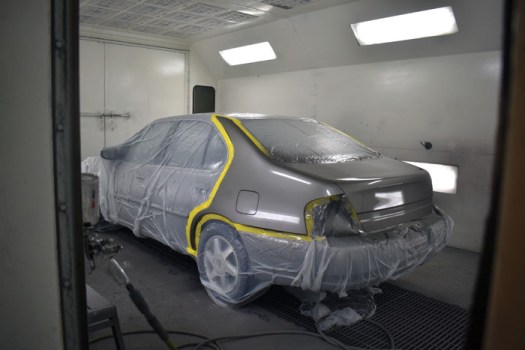 A car undergoes a makeover at Crossroads Auto Body. Hundreds of vehicles have been repainted or put back together in the shop over the years. Ben Stansell/Salisbury Post 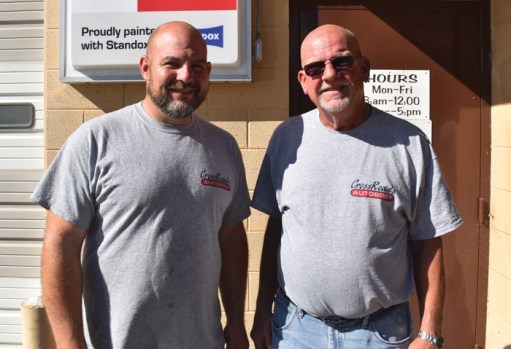 Branson Lefler (left) worked for his father, Neil Lefler (right), for several years before starting his own auto body shop. Now, Branson has bought out his father's business and will operate out of the shop he grew up in. Ben Stansell/Salisbury Post

FAITH — Neil Lefler still isn’t sure how he did it, but he remembers a lot of hard work was involved.

At the age of 30, with a day job and family at home, Neil took out a $25,000 home equity loan and used it to build the automotive body shop he’d always dreamed of owning.

“I was working full-time at the dealership and I’d come home and work here at night, until about 10 or 12 o’clock every night,” Neil said.

Neil, 65, constructed Neil’s Paint and Body Shop in 1986 on his family’s property at 1685 Kluttz Road, the same land he grew up farming.

The long, sleepless hours in the shop eventually paid off for Neil. He amassed a fiercely loyal customer base and left his day job to work at his shop full-time, eventually bringing on other employees to help with the load. For more than three decades, Neil’s Paint and Body Shop has been the place where locals have taken their vehicles for a fresh coat or a new fender.

After 50 years in the auto repair industry, Neil retired at the end of September. He sold the shop to his eldest son, Branson Lefler, who carved his path in the automotive business and started Crossroads Auto Body. The companies will now merge, with Neil’s Paint and Body becoming Crossroads Auto Body. Through the merger, the spirit of the family business will remain intact.

“It feels good to get back in the shop I grew up in,” Branson said. “I get to bring my own take and the way I run stuff back into his business. Hopefully I can learn a little bit of his stuff and keep what I’ve been able to achieve.”

Long before Neil ever got his hands dirty working on a real damaged car, he spent hours as a kid playing with fake ones.

“I loved to play with what they called Crashmobiles back in the day,” Neil said. “They were small cars that you could push them and crash them up in the wall and the front end parts would fly off of it. Then you’d put it back together.”

At the age of 15, Neil’s uncle gave him the opportunity to work on actual automobiles.

“My uncle was the body shop foreman at Wallace Motor Company, a Pontiac/Cadillac dealership,” Neil said. “He had a small shop behind his dad’s house he did body work in. He would come over and pick me up and take me over there and I’d work on Saturday for him. That’s where it all started.”

As a junior in high school, Neil joined the industrial cooperative training program, which let him cut class early everyday and go help out at Wallace Motor Company.

“I did that five days a week and the longer I worked, the more I became interested in it,” Neil said.

He repeated the program his senior year and then went to work full-time at Wallace when he graduated, all the while taking classes at what was then Rowan Technical College. Neil worked for a handful of area dealerships before being one of the first people hired in the paint department at MAN Truck and Bus, where Daimler’s Freightliner plant is now.

Neil worked his way up the ladder at MAN, becoming a supervisor. Then one day, overwhelmed by the pressure of the job, he abruptly walked out.

“I quit. I was mentally stressed out,” Neil said. “I had two children at home and a wife that stayed at home with them, and there I walked out with no job.”

On his way home, Neil stopped by Wallace Motor Company and got a job back where he started. In the meantime, he took out that $25,000 loan and started building his own auto body shop.

While Neil worked to build the business from the ground up, a young Branson was right there in the shop with him.

“Every evening, Branson came over here with me,” Neil said. “He had to. He had his own play tool box and whatever I did, he was right behind me.”

Branson’s aptitude for automotive work was clear from an early age, and there was nothing else he ever wanted to do.

“It was bred into me, I guess,” Branson said.

After graduating from Central Piedmont College, where he might’ve taught other students as much about cars as he learned, Branson came back to work with his father. And Neil thought that’s how it was always going to be, until one day Branson walked into his office with surprising news.

“It was the biggest shock in my whole life,” Neil said. “You’ve always heard that phrase, ‘They can pick me up off the floor?’ He came into my office one day and he told me, he said. ‘Dad, I’m putting in my notice.’ You could’ve literally picked me off the floor.”

Neil thought Branson was going to go into work with his younger son, West, who was in the landscaping business.

“It hurts me when they leave, but I understand where and why they’re going,” Neil said.

While some of his employees have left, most of his customers have not.

“We’ve always been known to do good, quality work,” Neil said. “I’ve had very, very few disgruntled customers. They’re always coming back, them or their families or friends. I’ve had people tell me, ‘Well, you fixed my great aunt’s car back in 1988. You couldn’t even tell it had been wrecked.’ That’s the way it’s supposed to be.”

Branson is hoping to retain as many of those customers as possible, even if they might be a little confused when they see the Crossroads sign out by the road instead of Neil’s.

Though Neil technically retired on Sept. 30, you can still find him helping out at the shop he built. It’s hard to leave something you’ve spent most of your life building, Branson points out.

What he’s going to miss the most when he does truly leave, Neil said, is the people who he worked with or alongside each and every day for three decades.

“I’m going to miss a lot of people, a lot of good customers, vendors, salesmen, insurance people, employees,” Neil said. “That’s going to be one of the biggest things I miss about working, is just seeing all of them.”