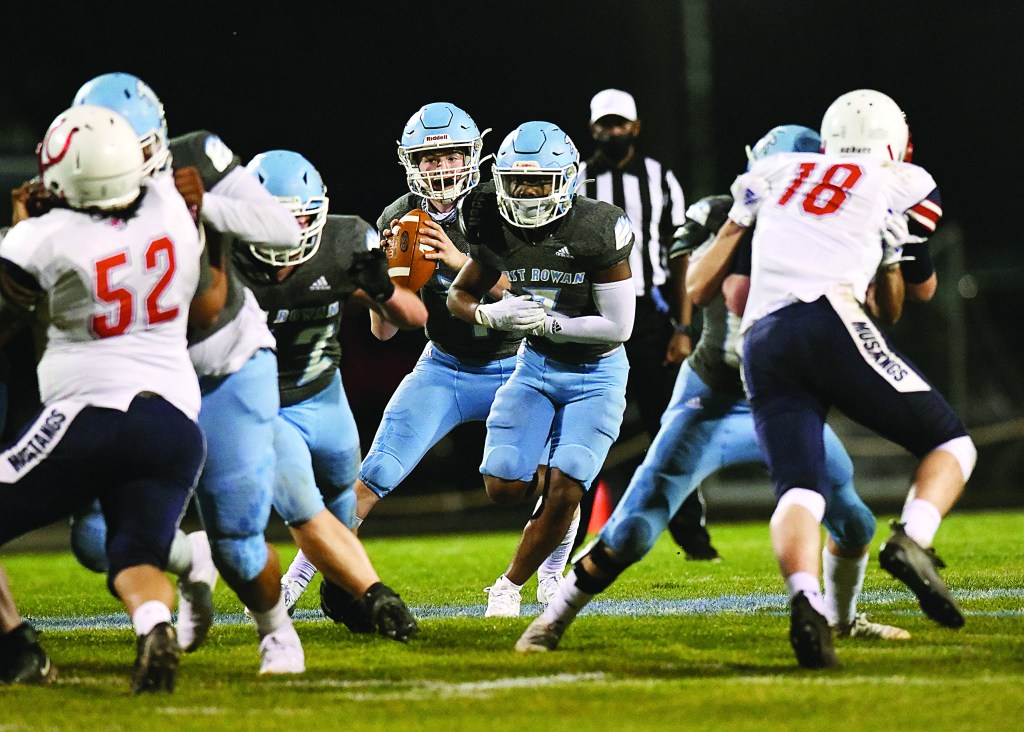 West's QB Noah Loeblein 4 with the ball. photo by Wayne Hinshaw, for the Salisbury Post

LINCOLNTON — Some high school football games are so well-played or easily won you can wrap them up in gift wrap and put a big red bow on top.

Then, there was Friday’s hard-fought, 34-28 overtime victory by the West Rowan Falcons over North Lincoln in the first round of the North Carolina High School Athletic Association 3A state playoffs.

The Falcons found themselves behind on the scoreboard multiple times, and the result was not a sure thing until Noah Loeblein took a second-down snap from the 1-yard line and got a massive push from his offensive line that allowed him just enough room to find the end zone.

“I love my offensive line and tight end; they were great blockers for me all night tonight.” Loeblein said after the win.

The Falcons started the overtime drive at the 5-yard line instead of the standard 10 because of an unsportsmanlike conduct penalty on North Lincoln. Cayleb Brawley, who has been a key piece of the Falcons’ running attack all year long, took the handoff and gained 4 yards down to the 1. Loeblein then took the snap and scored, sending West Rowan into the second round next Friday.

The game started with the 20th-seeded Falcons (7-3) playing defense after winning the kickoff and deferring to the second half. Two-and-a-half minutes later, North Lincoln quarterback Kyle Kovalchuk scampered 12 yards to make it 7-0 in favor of the Knights. That would be the first of his four touchdown runs to go with a 265 yard rushing performance in what would be his final game in a Knights uniform.

“Coach (Louis) Kraft trusted me right there to get the job done,” Robinson said.  “I went around the edge and got it done thanks to my blockers.”

That run put Robinson over 1,000 yards rushing for the season and contributed to his 144-yard rushing effort on Friday.

The Knights answered back with a touchdown right before halftime when Kovalchuk ran for 3 yards and the score. The Knights went for a 2-point conversion and converted to take a 15-14 lead into the half.

“I told the guys at halftime that if they stayed calm throughout the second half we’d win the ballgame,” Kraft said.

The Falcons came out in the second half and did just that. They faced adversity in this game, but they were ready to handle it.

The score remained unchanged until Kovalchuk ran for his third touchdown of the night to make it a 22-14 ballgame with 6:53 left in the third quarter. Three minutes later, Brawley, who ran for 55 of the most hard-fought yards of the night, took a handoff from North Lincoln’s 2-yard line and busted through a hole in the line for the touchdown. The Falcons went for two, and Robinson converted for 22-all.

The score remained tied  until Kovalchuk scored his final touchdown of the night with 5:51 remaining in regulation. He took a direct snap, shucked four tacklers, and scored a 49-yard touchdown. A bad snap caused the Knights to have to scramble for two and they failed to convert, leaving the door open for West Rowan.

Loeblein and company ate the clock down to 1:26 when the Falcon quarterback kept the ball for a 1-yard touchdown for a 28-all tie. The Falcons missed the PAT.

Then the Knights couldn’t get anything going on offense.

The Knights got the first crack on offense in overtime. Kovalchuk kept on three straight snaps and made it down to the 1-yard line. On fourth down, he took the snap again and ran right at Josh Noble, the wrong guy to run at.

Noble is a stud defensive end for the Falcons. He wrapped Kovalchuk up on the 1 and made the stop.

“He ran right at me and I made the play,” Noble said.

That set the Falcons up to score two plays later for the win.

Next for West is a trip to play the fourth-seeded Crest Chargers (8-2) in Boiling Springs.