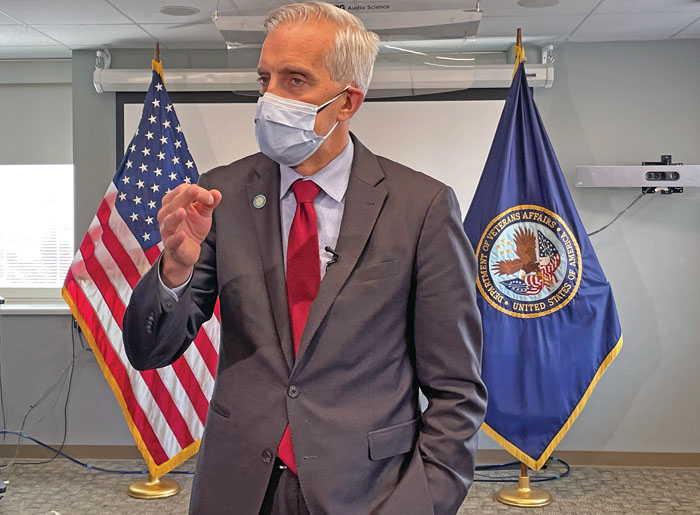 McDonough’s visit was to speak with staff, union officials and tour facilities. He assumed his role in February and previously served as chief of staff in former President Barack Obama’s administration. It was McDonough’s third trip to North Carolina since assuming the role, which he called “an important state for veterans.”

McDonough said the U.S. is about 10 days into the rollout of COVID-19 booster shots for eligible adults. As of Thursday, he estimates 440,000 shots have been administered across veterans affairs facilities, representing about 15% of eligible veterans. McDonough said that rate shows excitement among veterans to receive the booster shot.

McDonough said an estimated 2.8 million veterans are eligible, and he encourages them to get their flu shot with the booster in anticipation of “a tough flu season.”

In June 2018, former President Donald Trump signed into law bipartisan legislation called the Mission Act that aims to expand veterans’ access to health care, including allowing them to seek community care if there’s no local VA facility or a facility is unable to provide the services needed. Updates to the law made in 2019 provide veterans with certain urgent care benefits outside of VA facilities.

This week, USA Today Network reported a review of thousands of pages of department manuals and medical records, along with interviews with dozens of patients, advocates and providers, show some VA administrators are overruling doctors’ judgments and preventing them from sending their patients outside the VA health care system.

McDonough said he read the report, which has provided the department with additional intelligence so that individual veterans can be reached directly. Additionally, he said wait times have been managed well across VA facilities.

“I am concerned that there are pockets where veterans don’t get the timely, world-class care that they’re right to expect,” he added. “And when we find out that’s the case, we go and we address it.”

McDonough said the law allows the department to better compete for health care access with the private sector and “learning the lessons of individual cases” will better inform the report due to Congress this summer regarding implementation.

He added that concerns about wait times during the pandemic can be judged by the overall satisfaction rating, which hovers around 90% — though it should be 100%, he said.

The U.S. Department of Veterans Affairs in September released a report that shows veterans comprised nearly 14% of all suicides among adults in 2019, with veterans between the ages of 55-74 among the most common.

McDonough encouraged all veterans and their loved ones to contact the Veterans Crisis Line at 800-273-8255 or by texting 838255. He added that even if a veteran isn’t in a crisis at the time, don’t wait to reach out or seek care from the nearest VA facility or from virtual telehealth appointments through the VA.

Additionally, the department’s public awareness campaign regarding firearm safety has garnered more than 1 billion views, McDonough said. He also said up to 95% cases of suicides occur with the use of firearms, so the department is providing information about best practices to “get some distance between moments of crisis and firearms,” McDonough said.

Also during the visit, McDonough addressed questions regarding reports from WBTV of mismanagement at the VA’s regional office, known as VISN 6, for more than a year and subsequent retaliation against senior employees following their reported complaints.

The report found that leaders at the Salisbury VA Medical Center failed to implement the recommended discipline against two senior doctors who were found to have been involved in the sexual harassment of a female employee who reported the incident.

To address the existing cases and review those that have been closed, McDonough said he appreciated “the heads up” about the cases that date back to the previous administration, and that he’d have to review those cases. When asked about concern that one of the officials is from the Salisbury VA Medical Center, McDonough emphasized that he’s concerned with such issues and questions “constantly.”