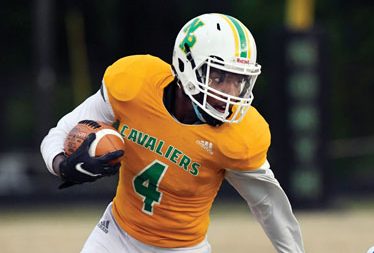 North Rowan's Amari McArthur recovered a fumble, intercepted a pass and scored on a 12-yard TD pass — all in the first quarter. He finished with five receptions for 101 yards and two touchdowns. File photo by Wayne Hinshaw, for the Salisbury Post

SPENCER —  North Rowan’s football team was angry when it arrived at James Carr Eagle Stadium — and rightly so. Then it went out and played that way.

A week after suffering a humiliating loss to unbeaten Salisbury, the the 12th-seeded Cavs hung a U-turn Friday night and trounced visiting Bessemer City, 62-0, in their 1A state playoff opener.

“It was more of a chip on our shoulders,” junior receiver Amari McArthur said after North secured a second-round match at Thomas Jefferson Academy. “We had to re-establish, make some changes, move some guys around. We knew we had to come into this game ready to play.”

North (7-3) put up some garish offensive numbers, rushing for 282 yards and six touchdowns while freshman quarterback Jeremiah Alford passed for 115 and two scores. Its defense, meanwhile, limited BC (2-9) to 108 net yards, forced four turnovers and contributed the game’s final points on an Orion Harris pick-six as time expired.

“We were coming off a rough one,” winning coach Nygel Pearson said after the Cavs prevailed for the fourth time in their last five games. “And it’s always good to get wins in the playoffs. Ya know, you win and play on, so we’re excited to get one next week.”

They got it largely because McArthur recovered a fumble, intercepted a pass and scored on a 12-yard TD pass — all in the first quarter. He finished with five receptions for 101 yards and two touchdowns, boosting his season totals to 46 catches, 1,050 yards receiving and 15 touchdowns. He had three additional TD’s nullified by penalties.

“Amari is special,” Pearson cooed. “I’m glad we have him for this year and another year. He can do it. He’s just a great football player.”

Losing coach Larry Boone felt the difference-maker was North’s team quickness. “They were very athletic,” he said after the 21st-seeded Yellow Jackets closed their season on a five-game losing skid. “They got into open spaces and we couldn’t tackle them. You can’t coach speed — and they’ve got speed. I thought we played well first quarter, first drive. But then we fumbled and it went downhill from there.”

Bessemer City took the opening kickoff and advanced to the North 29-yard line. But a careless, second-down pitchout from 6-foot-5 quarterback Jameer Holmes slipped to the turf, allowing McArthur to pounce on the loose ball like it was a midnight snack.

“It was a live ball and I just reacted,” he said. “That’s called ‘Football IQ,’ and you’ve got to have it.”

North cashed in with 5:15 remaining in the opening period, when McArthur snared a pass in the left flat and zig-zagged his way into the end zone. BC’s second possession ended when McArthur picked off a pass and returned it 45 yards for a TD, only to have the scored erased by a blocking penalty on the return. North buttressed its lead with three second-quarter touchdowns to go up 28-0 at the half.

“We came out with a lot of intensity and momentum,” sophomore running back Jae’mias Morrow said after rushing for 87 yards and a pair of scores. “We played our responsibilities, stayed hungry and kept our heads up.”

Morrow, McArthur and even Boone — an astute, 17-year sideline veteran — credited the efficient play of Alford, who ran for 77 yards and two touchdowns and led a balanced attack. “The quarterback’s what, a freshman?” Boone inquired. “That’s scary. As long as he keeps improving, he’ll be a good one. He throws the ball well and he’s hard to tackle. There’s a lot of promise there.”

Camouflaged in the rout was the yeoman’s work turned in by North’s offensive line. Comprised of seniors Tristian Summers and Ralond Frost, along with underclassmen Alex Colon, Robert Caldwell and KaMahri Feamster, it opened holes wide enough to drive the team bus through.

“You can’t do what we just did without those guys,” said Morrow. “We gotta thank them.”

There were lots of gold stars to hand out — and North will need more of them to survive next Friday in Rutherford County. Fifth-seed Thomas Jefferson (7-3 with four straight wins) notched a 42-0 win over Bessemer City on Sept. 17.

“We’ll need to keep pushing ourselves,” Pearson concluded. “Our kids are just excited to be in the playoffs, but they’ll need to play hard to keep this going.”

NOTES: The shutout was North’s second of the season. Bessemer City managed just five first downs, 44 yards rushing and took only 12 snaps in Cavs’ territory. “We locked in on defense,” said linebacker Khalil ‘Real Deal’ Davis. “We played as a unit and got the job done together.” … Teammate Jerome Blakeney, a junior DB, had a fourth-quarter interception and later, subbing at quarterback, scored on a 49-yard TD run. … North linebacker Khor’on Miller recorded two sacks. … Alford has passed for 17 touchdowns and rushed for 12. … Sophomore kicker Daniel Montes-Medrano was 8-for-8 on extra points. …  BC running back Justice Cooper was injured early in the second period and never returned. He finished with 23 yards on five carries. … A running clock was initiated with 3:11 remaining in the third quarter. … Thomas Jefferson advanced with a 39-7 first-round win against Avery County.