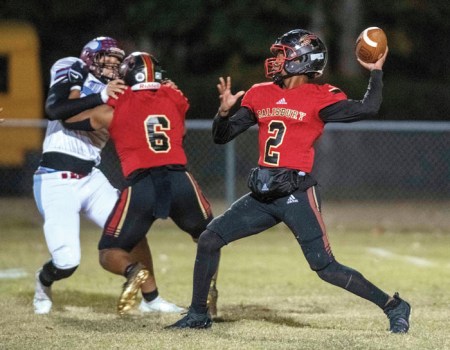 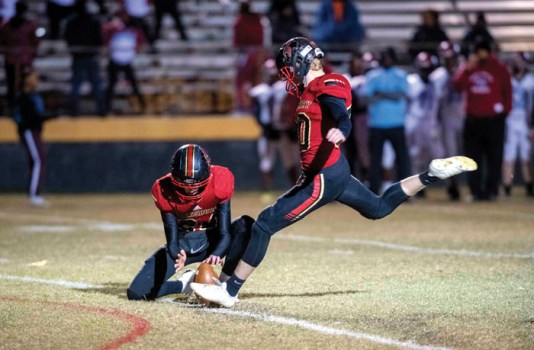 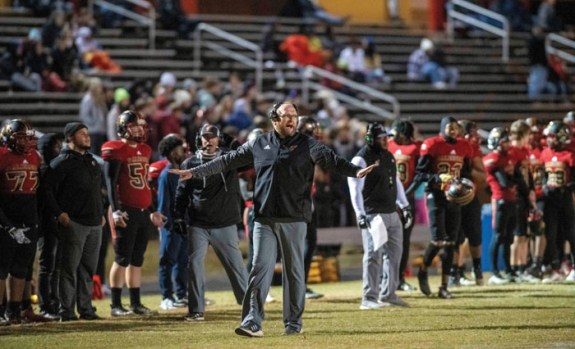 Head Coach Brian Hinson calls for a timeout close to the end of the first half. Salisbury high defeated North Forsyth high 49-6 in the opening rounds of the playoffs at Ludwig stadium. . JON C LAKEY / FOR THE SALISBURY POST. 11/5/21, Salisbury,NC. 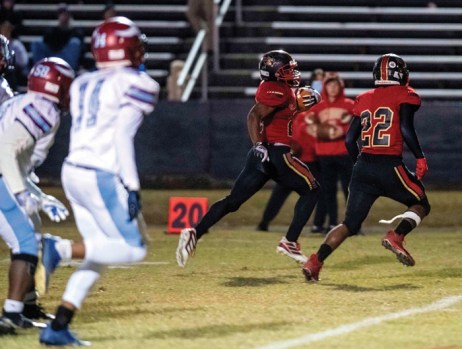 Salisbury’s Marcus Cook (25) runs the ball back for a touchdown. Salisbury high defeated North Forsyth high 49-6 in the opening rounds of the playoffs at Ludwig stadium. . JON C LAKEY / FOR THE SALISBURY POST. 11/5/21, Salisbury,NC. 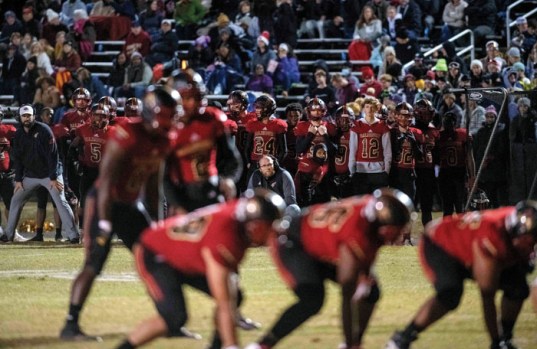 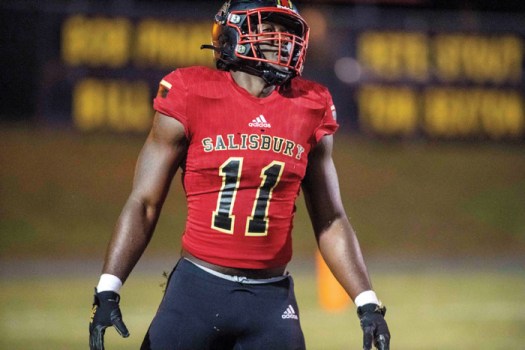 SALISBURY — North Forsyth won the pre-game coin toss, won halftime with a strong effort by the marching band and won the second half by scoring on the last snap.

But Salisbury won the first half at Ludwig Stadium — and that was really all that mattered. That’s when the Hornets delivered an overdose of the shock and awe to which SHS fans have grown accustomed.

The awe included Jaden Gaither blocking two punts. The shock included Marcus Cook covering more than 100 yards in a hurry to score on an interception return and a punt return.

If the 2A playoffs were supposed to boost the level of competition, well … they didn’t, at least not in the first round. North Forsyth has athletes, but Salisbury has bigger, stronger athletes. Salisbury obliterated the Vikings 49-6 with its quick-striking special-teams and defensive units.

The SHS offense can be forceful, as well, but on this night it was barely needed.

“We did what we needed to do defensively and on special teams,” All-America linebacker Jalon Walker said. “They got a few more yards than we like to give up, but we buckled down and took care of business.”

The business of the Hornets (10-0) is winning. This was 17 in a row, boosting the school record. This was the ninth running-clock decision during an ugodly season.

What North Forsyth got, it got through the air, where two QBs combined for 117 yards.

The 27th-seeded Vikings (5-6) hit a few nice pass plays, but they hit solid brick walls when they ran. They netted 13 rushing yards.

“Our defense was really good and those guys were bringing a lot of pressure,” Salisbury head coach Brian Hinson said. “No, we didn’t have any big offensive stats, but stats are just something you talk about at the all-conference meeting. When you win, the stats don’t really matter.”

Salisbury’s offensive series to begin the game won’t make the highlight video. A fumble the Hornets were lucky to get back was followed by a pair of incompletions and a punt.

“Our start was flat,” Hinson said. “Pretty bad, really, but then the defense went out there and started getting us great field position. Defense and special teams got the ball rolling for us.”

Anthony Dodd, who turned in a big game, got an early sack, and North Forsyth was three-and-out and ready to punt. That’s when Gaither stormed through for the first of his punt-blocks.

After the dust  settled, Salisbury’s offense trotted back on the field with the ball at the North Forsyth 10. Quarterback Mike Geter got the first of his three short touchdown runs. Wade Robins kicked the point for 7-0 with 7:46 left in the first quarter.

Aggressive coverage of Robins’ ensuing kickoff and a penalty for an illegal block forced North Forsyth to start from its 11, and the Hornets kept the pressure coming. On fourth-and-long, a punt snap was mishandled, and the Hornets’ offense was looking at another very short field.

Geter bulled for the touchdown and the 2-point conversion, his 11th of the season, for a 15-0 lead.

North Forsyth was very conscious of Walker. That was the Vikings’ primary concern on every snap — run it somewhere he’s not or try to roll the quarterback away from him. But he still made plays and helped his teammates make plays. The Vikings got stuffed again on their third possession. This time, they got the punt off, but Cook gathered in at the 40, and went all the way.

Now it was 22-0, still first quarter. That was the Hornets’ sixth kick-return TD of the season, and they weren’t done.

“We practiced hard this week,” Walker said. “When the playoffs come around, it’s win or go home, and none of us want to go home empty-handed.”

The Hornets made it 29-0 in the first minute of the second quarter. Geter connected on a third down pass with Walker to get the Hornets close. Then Geter scored his 24th rushing TD — yes, his 24th — of the season.

Next, a 64-yard interception return by Cook — Salisbury’s ninth defensive TD — made it 35-0.

“Happy for him to have such a big night,” Hinson said. “He’s one of those guys who is always smiling, always positive.”

Gaither’s second blocked punt and his recovery for a touchdown made it 42-0.

“We did  a lot of things right on special teams,” Hinson said. “Great job by Robins kicking it nd then we had the coverage we needed on top of that. We kept the field tilted against them the whole first half. It’ makes it a lot easier anytime you can do that.”

Salisbury put together a conventional drive late in the half. JyMikaah Wells did most of the heavy lifting on that journey, and he was rewarded with a touchdown burst, his 19th of the season.

It was 49-0 at that point. With a running clock, the second half rolled like someone had hit the fast-forward button. Johnai Roppy handled most of the Salisbury carries in the second half.

Kevin Springs threw to Victor Wingate, who started the game at quarterback, for that final-play TD for the visitors, as they managed to avert a shutout.

Seeded sixth in the 2A West bracket, the Hornets have allowed only 33 points all season.

Geter had his lowest rushing yardage and passing yardage numbers of the season, but he made his yards count with those three trips to the end zone. Wells had 87 rushing yards.

Next for Salisbury is a home game against Bunker Hill.

NOTES: Bunker Hill (10-1) beat East Davidson 21-7. Bunker Hill was runner-up in a conference that included undefeated Maiden. … Receiver/DB Deuce Walker, who got banged up in the North Rowan game, was cleared to play and got some action. Hinson said he should be a “full go” for next week. … Jalon Walker was honored as WSOC-TV’s Big 22 Player of the Year at halftime. “A great honor and a blessing to be considered one of the best in the state,” Walker said. “It’s not just an accolade for me, this is a team and community award. … Jeremiah Booker, a senior H-back who got in the game in the second half, was one of the pre-game captains for the Hornets.