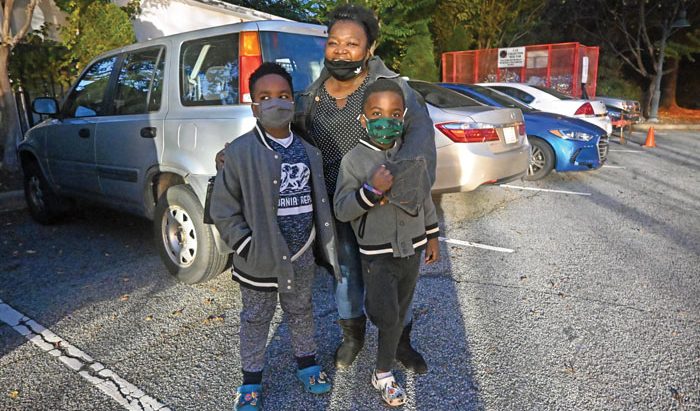 Natalie Anderson/Salisbury Post — Salisbury voter Shante Gillespie cast a ballot in Salisbury's 2021 municipal race Tuesday with her sons, Zayden, 10, and Zahir, 6, alongside learning about the process of voting.

During the 2020 general election, Rowan County had its greatest turnout since the 1984 presidential race, with nearly 76% of eligible voters casting a ballot. By contrast, only 18% of the 40,558 eligible voters in Rowan County cast a ballot for the 2021 municipal races. In Salisbury alone, 4,997 votes cast a ballot in the mayoral race. Those same voters could also choose four candidates to fill seats on the City Council.

Taariq Watson, a Salisbury voter, said this year was his first time voting locally, but he finds it important since city leaders pass resolutions and laws that affect residents’ daily lives. Additionally, those leaders influence the future and growth of the city.

“It’s important to have a say in what our tax dollars are going to,” Watson added.

Watson said he read up on all the candidates and selected the four that best represented the vision he sees for the city. He wanted to see some diversity among council members who can provide “different voices than what we’re used to.”

Watson said improving relations between local law enforcement and the public is important, but he doesn’t feel the relations are all that bad given the city’s size. He’d like to see city leaders implement more programs for the youth and foster jobs and opportunities “for those who may not have them.”

“I’m definitely happy that I have the right to vote,” Watson said. “And we should all exercise that right if able because we all have a say.”

Shante Gillespie, a regular voter in Salisbury, said she liked voting for mayor separately this year so she could focus more on that role. Gillespie said she chose to support Mayor Pro Tem Al Heggins because she’s seen her around the community and within Gillespie’s neighborhood even before she was first elected, which Gillespie said means a lot. She also appreciates Heggins’ efforts in pushing the council to pay city employees a living wage when Heggins was mayor from 2017-19.

Gillespie said the biggest issue for the new mayor and council to address is bringing more jobs to the city so residents don’t have to travel to places like Charlotte and Winston-Salem for work. Additionally, she’d like to see more educational programs in place that train students here to retain local talent.

Alongside Gillespie on Election Day were her two sons, Zahir, who’s 6, and Zayden, who’s 10. Gillespie said she wanted to show her sons the democratic process at work, especially since one seems interested in running for public office one day.

“The things that go on around me in my community in my city is in their hands,” Gillespie said about the importance of voting in local elections. So I can’t complain about making the change if I’m not a part of the change.”

Shanita Millsaps, a retired Salisbury police officer who served as chief judge at the Park Avenue Community Center precinct, said Election Day went well, with the day beginning slow but picking up in spurts until polls closed at 7:30 p.m. Millsaps said she was happy to hear about a large turnout at that precinct, which shows 601 votes cast by the time polls closed.

Each voting location is staffed with a chief judge, judge and assistants. The chief judge is in charge of the voting location on Election Day and opens and closes the polls. A judge, either a Democrat or Republican, works closely with the chief judge to assist with setting up voting machines and attending to voters. Assistants help with tasks like completing paperwork and tidying up the precinct.

Millsaps said this was her first time serving as a chief judge and she enjoyed the experience, but she’s unsure if she’d want to assume that same position for future elections. But she’s a regular voter and encourages others to turn out for local elections, which historically have much lower turnout among registered voters.

“It’s really important because when people want change sometimes and then they fuss about it and don’t go out to change it when they can,” Millsaps said. “Voting matters. One vote matters.”

Eric Shock, a voter in Salisbury, said he makes every attempt to vote in each election, but since local government has some of the biggest daily impact on voters’ lives, Shock said “those elections are arguably more important than ‘major’ elections for state and national offices.”

Shock said when determining which candidates to support, he looks at the volume of work and the message.

“I want and supported candidates who would ‘work well with others’ instead of being a divisive wedge,” Shock said. “I refuse to be tied to partisan politics, and make an effort to support candidates across a spectrum of political backgrounds. If there’s going to be a liberal serving, there should be a conservative serving and a moderate voice of reason.”

Shock said among the biggest priorities for the new mayor and City Council are crime and economic development, which he said go hand-in-hand. While strides have been made for both, Shock said that momentum can’t be lost.

“Where there are jobs and opportunity, people have more pride, more stability and crime rates drop,” Shock said. “Additionally, we are an amazing town with lots of great qualities, but also a very dichotomous city with lower income neighborhoods being only a block or two from upscale, historic mansions and wealth. Our diversity is an asset, but some council members in the past have had their segments of the community they championed, when the focus has to be on serving the needs of everyone from the West End to Milford Hills to the Country Club to downtown to Matika.”