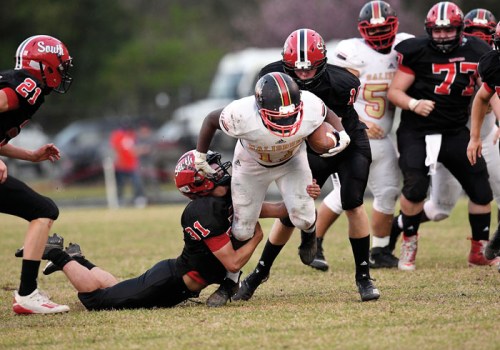 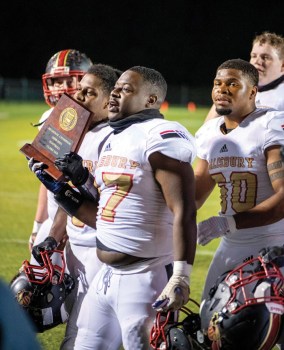 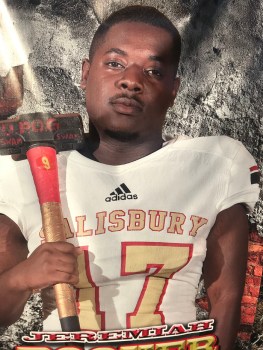 Salisbury’s Jeremiah Booker says, ‘I think this is our best team as far as working together.’

SALISBURY — Salisbury High senior Jeremiah Booker has carried the ball in a state championship game — and he gets it.

He understands how few players ever get to do something like that.

He appreciates that only a tiny percentage of high school players get to mingle tears with sweat as they embrace a state championship trophy.

On a powerful, undefeated team with a host of high-ranking generals, colonels and majors, Booker is a sergeant.

He’s a long way from a star on a team with a whole galaxy of guys doing incredible things, but he’s one of the voices the coaches and players hear in the weight room, on the practice field and on the sideline.

“He’s one of the best teammates any of our guys will ever have,” SHS head coach Brian Hinson said. “He works hard and he pushes his teammates hard. He pushes them to be better, and even when he’s not out there, he’s a voice.”

Booker is referred to as “The Book” by teammates and coaches. He’s a stocky kid at 5-foot-8, 192 pounds.

He looks like a running back, and that’s mostly what he’s been during his four years as a Hornet, although he’s also played some linebacker.

Booker got four late carries when Salisbury wiped out West Rowan on opening night last spring. He got several more carries in the Central Davidson game in which Salisbury began its current, 16-game winning streak that has set a school record.  He unexpectedly got to tote the rock three more times when the Hornets crushed Ledford in the game that triggered an elevation in the program’s level of play. In the 62-3 cruise against South Rowan that closed the spring regular season, Booker got a team-high 14 carries and delighted fans by pounding for 51 yards.

When Salisbury romped at Maiden, Booker got to experience the thrill of running the ball in the playoffs.

Then his teammates were as pumped up as he was when Booker got in there to help finish off the 42-14 pounding that the Hornets gave St. Paul’s in the 2AA championship game.

One carry for zero yards, but a lifetime memory.

Booker envisioned more carries as a senior, but coaches had other plans for him.

“They came to me and said they needed me to be an H-back this season more than they needed me at running back,” Booker said. “It’s a blocking role, but I’ve done my best with it. I’ve had some blocks on plays where we got a lot of yards.”

Hinson never doubted Booker would give his new assignment everything he had.

“He’s played an array of positions for us,” Hinson said. “He’s a team player, and he’ll do whatever is asked.”

Booker says this is Salisbury’s best team, better than the 2019 state runner-up team and better than the team that won it all in that delayed 2020 season that was played in 2021.

That title game with St. Paul’s was just six months ago, so now the Hornets are seeking their second state title of this calendar year, as well as their third straight trip to a state-title game.

Obviously, no one’s had this sort of sustained success in Rowan County since West Rowan made four straight trips to 3A championship games in 2008-11 and brought home three crowns.

“I think this is our best team as far as working together and as far as everyone doing what the coaches want us to do,” Booker said.

Only Thomasville avoided the running-clock fate, and the Bulldogs barely did. Two of the four touchdowns that have been scored against Salisbury were scored late by Thomasville.

Salisbury has allowed one touchdown this year while it still mattered.

It will be a historic team regardless of what happens in a ferocious 2A West bracket that will be made even more challenging by the Hornets’ No. 6 seed.

Doing away with the subdivision of the classifications seriously changes the magnitude of the task in front of them.

And if the seeds hold, they’ll play more playoff games on the road than at home.

But they’ve been on the road before. They had to win at Maiden, Burns and North Davidson last spring. They had to win three East Regional road games, two of them a long, long way from home in 2019.

The playoffs start at home with an interesting and fresh opponent — North Forsyth — one of the Winston-Salem schools. Kickoff is at 7:30 p.m.

North Forsyth has been reduced in size quite a bit over the last decade, but it’s a 2A school that has 4A athletes, if that make sense.

“They do have a lot of speed, a lot of athletes,” Hinson said. “And they’re a well-coached team.”

Bernard Williams Jr., a former North Forsyth player who played at East Carolina, is a social studies teacher and defensive-minded guy who is leading a rebuild.

North Forsyth was winless and awful and hit rock-bottom a few years ago, but now the Vikings are back in the playoffs.

The Hornets will be ready for this exciting first challenge. Booker will help them be ready.

“This has been a great opportunity for me to be coached by great coaches and to play with great players,” Booker said. “I try to do a lot of talking. As a senior, I try to help everyone be better.”