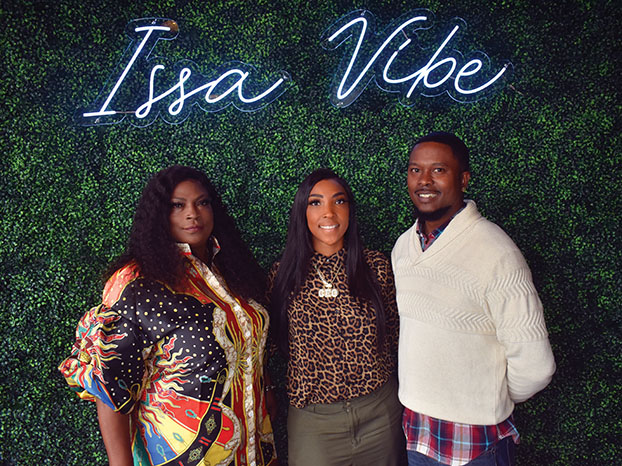 Tonya Rankin, Shi-heria Shipp and Terry Wood are the team behind Vibez. The new downtown restaurant offers a full menu of southern-inspired dishes during the week and becomes a lounge on Friday and Saturday nights. Ben Stansell/Salisbury Post

SALISBURY — As a collegiate basketball player, Shi-heria Shipp spent plenty of time traveling across the country for road games.

When they weren’t competing on the court, Shipp and her teammates were always sure to check out the local culinary offerings.

“We went out to eat from high end all the way to McDonald’s, so I was able to taste a variety of different foods and go to big cities to eat,” Shipp said.

Inspired by those experiences, Shipp recently opened her own restaurant and lounge in downtown Salisbury. Called Vibez, the eatery and venue is located at 127 S. Main St.

“The dream was to incorporate me traveling to different lounges, bars, restaurants and I wanted to do a one-stop-shop where at Vibez we have great food, we have great service and a bar that’s high end,” Shipp said.

A Rowan County native, Shipp made her mark on the hardwood for Salisbury High School. Along with being a three-time All-Rowan County selection, Shipp led the Hornets to a 2A state championship in 2009. Shipp’s play earned her a scholarship to George Washington University in Washington, D.C. She spent several seasons with the Colonials before transferring to Temple University in Philadelphia for her final year. 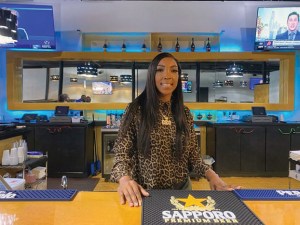 Shi-heria Shipp stands behind the well-lit bar at Vibez. Shipp said the restaurant and lounge offers a food and drink menu with something for everyone. Ben Stansell/Salisbury Post

After graduating, Shipp returned to her hometown and began working with her mother, Tonya Rankin, at TGH Behavioral Health Services. When Shipp pitched the idea of opening a restaurant and lounge in Salisbury, Rankin was more than happy to support her daughter.

“She stepped in right out of college and helped me, so now it’s time to step in and help her with her dream,” Rankin said.

The mother-daughter duo rented the space where Palermo’s Pizza was once located and gave the former Italian eatery an entirely new look.

The ceiling, tables and seats in the restaurant are black, with gold accenting white walls. TVs are stationed around the dining area and strobe lights bathe the bar in a variety of ever changing colors. A large painting of a woman completed by local artist Derrick Martin is stationed near the front door, and more of Martin’s art can be found on a “selfie wall” at the back of the building. The wall contains paintings of angel and butterfly wings, in addition to portraits of political and sports figures such as Martin Luther King Jr. and Kobe Bryant.

Even the Vibez bathrooms have been given their own ambiance. Every inch of the women’s restroom is painted pink and the men’s room a bright blue, Shipp’s favorite color. 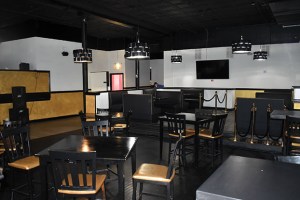 With black and gold as the dominant colors, the look of Vibez is drastically different from the Italian restaurant formerly located at 127 S. Main St. Ben Stansell/Salisbury Post

Vibez certainly looks like it’s tailor-made for a Friday night, but Shipp wants to dispel the idea that the business is a “club.”

“Some people may not really understand it yet, but it’s definitely a relaxed environment where everyone is welcome,” Rankin said.

Vibez serves a full food menu that features entrees from hot honey chicken wings to salmon with Caribbean glaze. The kitchen is captained by head chef Terry Wood, whose specialty is seafood macaroni and cheese. Wood has worked some in commercial kitchens before, but attributes his culinary skills to the knowledge passed down from his family.

“Terry is one of the best in Salisbury, so I knew I wanted him on my team,” Shipp said. “It’s a place where somebody can come and eat high end southern food as well as incorporate different lunch menu items such as salads, club sandwiches, things like that as well.”

Rankin serves as sous chef, and has contributed some of her family recipes to the menu as well.

A mix of libations are offered at the bar, and Shipp said she is working on a specialty drinks menu that will highlight “Instagram famous” beverages.

Vibez takes on a different ambiance on Friday and Saturday nights when it stays open until 2 a.m. and a DJ is in the building. Shipp said she is working to schedule comedians and other performers to bring more live entertainment downtown. Portions of the lounge can also be rented out for private parties and hookah is available.

Whether it’s on a weekday for lunch or a weekend evening for a celebration, Shipp said she wants Vibez to be a place where everybody is welcome.

“We’re trying to bring something different,” Shipp said. “You can come here and get a good vibe and it’s welcome to everyone. Even though we are Black-owned, it’s not just where Black people can come and feel comfortable. It’s open to any and everyone.”

Editor’s Note: The story has been updated since publication to reflect the business’ correct hours of operation.