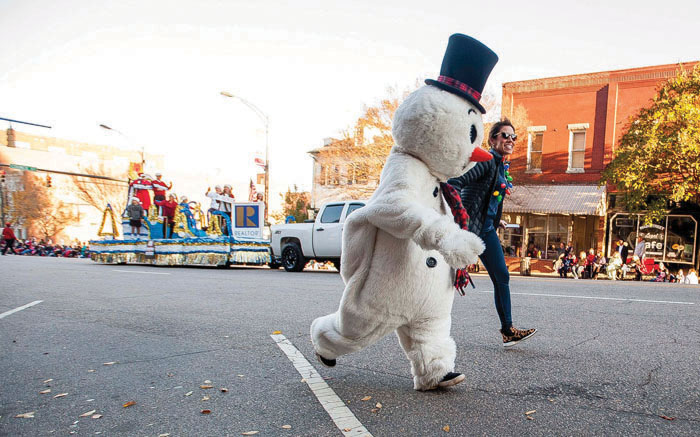 Robin Fisher encourages the Sacred Heart Snowman to catch up with the rest of the group during the first 'Tis the Season Spectacular holiday parade. Jon C. Lakey/Salisbury Post file photo

SALISBURY — Christian pop artist Britt Nicole as well as country duo Dustin Chapman and Ryleigh Madison will be the headliners for the first ever Holiday Spectacular at Bell Tower Green, which will follow this year’s ‘Tis the Season Christmas parade.

The parade will be held Nov. 24 and start at 2 p.m. near East Jefferson Street in Spencer. After transitioning to a “reverse-parade” in 2020, this year’s procession will be held traditionally with floats and entertainers riding through the street while spectators watch from the sidewalk.

Once the parade makes its way through downtown Salisbury and finishes near Stallings Memorial Baptist Church on South Main Street, festivities at Bell Tower Green will be underway. This is the first year parade organizers Hen Henderlite and Shari Graham have held an after-procession party.

“We’re so excited,” Henderlite said. “I think our entertainment is fabulous. Having a combo of Dustin and Ryleigh and Britt Nicole, I just think it’s going to be a wonderful, wonderful evening full of events and stuff for the family. We hoped to have one or the other and they both said yes. We’re incredibly thankful to have such quality entertainment.”

The music will get started at 4 p.m. when the Salisbury Swing Band takes the amphitheater stage. They’ll be followed by the Los Gavilanes Mariachi Band.

Music will be paused around 5:45 p.m. for the ceremonious lighting of the 25-foot-tall Bell Tower Green Christmas tree, donated by the Todd Steinman family. The massive tree will stay up for the remainder of the holiday season.

Once the tree is sparkling, Dustin Chapman and Ryleigh Madison will begin their performance. Chapman, 24, and Madison, 16, are an uncle-niece duo from Whiteville. 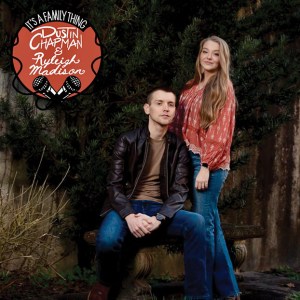 The duo incorporates traditional and contemporary country, gospel and blues into their sound. Chapman is a Catawba College graduate who was selected to be a contestant on this past season of American Idol, where he made it to Hollywood Week. He also won 2020 Male Single of the Year for his song “Plus One” at the International Singer-Songwriters Association Awards.

Following Chapman and Madison will be Britt Nicole, a Rowan County native who started singing at her grandfather’s church in Kannapolis when was only 3 years old. Nicole signed with Capitol Records and has released four records. Her songs have been featured in movies, TV shows and have charted on Top 40 Pop and Christian Radio. Nicole’s album “Gold” received a Grammy nomination for best contemporary christian music album. Nicole is the daughter of Sheila Igo, owner of Greystone Salon and Spa in Salisbury. 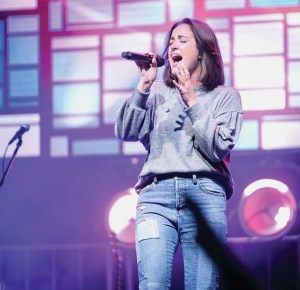 People are encouraged to bring chairs or blankets to place on the Bell Tower Green lawn to listen to the music throughout the night. In addition to music, there will be a number of festivities all around the park, including family games, arts and crafts and inflatables. Santa Claus will be stationed at the end of the park’s archway, receiving Christmas wishes.

Food and beverage vendors will be positioned along Fisher Street. New Sarum also is brewing a specialty holiday beer for the event. The proceeds from the holiday brew will benefit Prevent Child Abuse Rowan.

Today is the final day the The ‘Tis the Season Spectacular parade is accepting entries. Applications can be submitted on the parade website: tistheseasonspectacular.com. Applications can also be downloaded and brought to the Rowan County Tourism authority along with an entry fee check. Cash will not be accepted this year.

Graham said there have been just over 100 entries parade entries submitted so far, but she expects a few more applications to come in at the last minute. Entries include parade staples such as bands and professional floats. There will also be a few new additions such as a Chinese dragon and a group of bagpipe players.

Both the ‘Tis the Season Spectacular Parade and Holiday Spectacular at Bell Tower Green are sponsored by Food Lion.