High school football: Finally … the playoffs, and Hornets are the team to watch 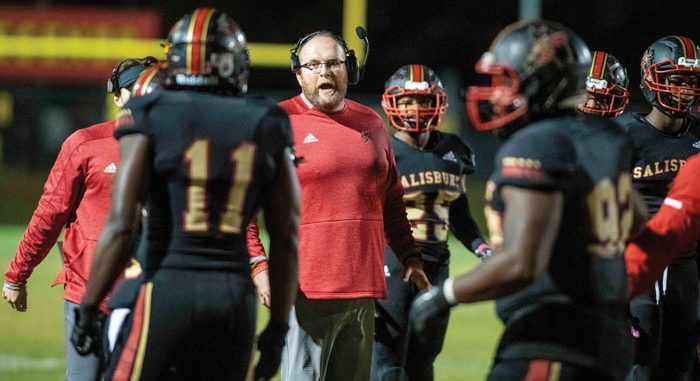 SALISBURY — People who follow Salisbury High football turned their attention to the state playoffs around Week 2.

The postseason, at long last, arrives on Friday.

Salisbury crushed nine regular-season opponents, blowing out Polk County (6-3), Thomasville (7-2), East Davidson (6-4) and North Rowan (6-3), as well as five teams that had losing records. There was excitement, but zero drama, except maybe for the first quarter against Thomasville.

The most comparable team in school history to the current Hornets would be the 1995 squad that wrecked its 10 regular-season opponents, while averaging 40-plus points and allowing 4.7 points per game. Those 1995 Hornets finished 12-1, losing an epic third-rounder against eventual state champion Thomasville. That team established school offensive and defensive records that stood for many years.

Even with the running-clock mercy rules the NCHSAA approved in 2014 to try to keep things from spinning out control and to attempt to limit embarrassment and injuries, Salisbury is averaging a ridiculous 56.9 points per game, while allowing an equally ridiculous 3.0 points per game.

Nothing quite this crazy ever has happened in Rowan. It’s been a perfect storm of quality coaching, great athletes and overmatched competition.

If you’re wondering how the Hornets compare statistically to the West Rowan state champions of 2008-10, the most dominant of those West teams as far as point differential was the 2010 squad that shut out six teams and allowed 4.5 points per game during the regular season. That West team annihilated all of the struggling programs it encountered, as you would expect, but it also manhandled some good ones, beating Davie 40-0, Mooresville 32-0 and Statesville 40-0.

As a rule, you play better teams in the playoffs than in the regular season, especially as the playoffs progress. The 2010 Falcons allowed 28 points to Concord in a third-round shootout, so they  finished their 16-0 season with averages of 40.6 points per game on offense and 7.06 points allowed on defense.

It’s a safe bet that Salisbury’s current scoring rates have to come down and their points allowed figures have to rise during the playoffs, but it will be interesting to see where their amazing numbers land when all is said and done. The Hornets have the horsepower to turn their perfect nine-game regular season into a 14-game thrill ride for themselves and their fans, but as the No. 6 seed in the 2A West bracket they’re going to have to win multiple challenging games on the road if they’re going to get where they want to go.

Technically, the schools have met before, although it’s been several generations. Back in 1965, North Forsyth, which opened in 1963, roughed up Boyden. In 1966, Pete Stout’s first year as head coach on Lincolnton Road, Boyden beat North Forsyth.

The opening of Ronald Reagan High 6.6 miles away in 2005 forever altered the athletic fortunes of the Vikings. North Forsyth was a 4A school for many years, but that status  changed about a dozen years ago.

In some respects, North Forsyth’s roster resembles North Rowan. North Forsyth has the skill people, led by QB Victor Wingate, to compete with just about anyone, but Salisbury is going to have a huge advantage in the trenches in terms of power, size and physicality.

One of North Forsyth’s five official wins was a forfeit victory after a loss on the field.

NF’s losses included a 42-12 conference setback against Reidsville, one of the outstanding teams the Hornets could see down the road. North Forsyth lost its regular-season finale to McMichael in overtime in a game for second place in its conference.

Salisbury is a 36-point favorite by the Massey Ratings.

Salisbury QB Mike Geter has rushed for 21 touchdowns and thrown for 1,158 yards and 14 TDs. Salisbury doesn’t have crazy yardage totals, partly because starters have sat early in some games and partly because an overwhelming defense led by All-America Linebacker Jalon Walker  frequently hands the offense a short field. JyMikkah Wells is the workhorse back with 913 rushing yards and 18 TDs. Marcus Cook is the leading receiver with 18 catches for 50 yards and six TDs. Deuce Walker has five TD catches.

Salisbury has scored eight touchdowns on defense and has returned five kicks for touchdowns.

Bessemer City won only one conference game, and that was against winless Highland Tech, so North’s Cavaliers are expected to have a good outing.

The Cavaliers are favored by about four touchdowns.

North Rowan is allowing more than 30 points per game, but the Cavaliers have compensated with an offense that caused serious problems for everyone except Thomasville and Salisbury.

Freshman QB Jeremiah Alford has accounted for 25 touchdowns — 10 rushing and 15 passing. Jae’Mias Morrow has been the primary running back and has produced 1,016 rushing yards and 16 touchdowns. Amari McArthur needs 51 yards for a 1,000-yard receiving season. He has 41 catches for 11 touchdowns, and he’s also scored on a punt return and a running play.

Justice Cooper, who plays both ways, appears to be Bessemer City’s best player. He’s rushed for 768 yards and 10 TDs.

This is the first-round tossup game involving the local teams.

Both are conference runner-ups.

North Lincoln lost its opening game to West Lincoln in a defensive struggle. The only other loss was in a low-scoring game with Statesville on Sept. 17, so the Knights have won six in a row, including victories against two conference foes with solid records — Hickory and East Lincoln.

The orchestrator of the offense for the Knights is quarterback Kyle Kovalchuk, who has run for 837 yards and 16 TDs. He hasn’t thrown a lot, but he’s averaging 23 yards per completion and has hit big plays for six touchdowns. Workhorse Brennen Rogers has turned in a 1,000-yard rushing season.

North Lincoln is coached by Nick Bazzle, a veteran who once led Newton-Conover to a state championship.

Like the Falcons, North Lincoln is blue, but it’s a Duke blue, as opposed to West’s UNC shade.

Both teams beat Northwest Cabarrus, although the Falcons had a much easier time of it.

West lost early this season to 4As Mooresville and Davie, both of whom made the playoffs, and then lost a late showdown for the South Piedmont Conference championship at Concord.

Despite those setbacks, there’s a lot to like about West offensively and defensively.

Akin Robinson needs one more good run for a 1,000-yard rushing season, while Cayleb Brawley has rushed for more than 500 yards. They’ve combined for 16 rushing touchdowns.

Noah Loeblein has thrown for 2,015 yards and 24 touchdowns, with Peter Williams-Simpson accounting for 885 yards and 10 TDs on 39 catches. Garrett Fesperman has 32 catches for 575 yards and six scores.

Carson got in the playoffs with its three-game winning streak to close the regular season, but the draw wasn’t great.

Carson is excited about being in and justifiably so, but it will be a 31-point underdog at Crest.

The Chargers, who call Boiling Springs home, are right down the road from Shelby. They play in one of the football hotbeds (Cleveland County) and are one of the state’s perennial powers. They’re generally loaded with speed, size and athletes.

Mari Adams, an elite running back, is the main man for the Chargers. He rushed for 241 yards and four touchdowns last week in a win against Kings Mountain, while Javarius Greene averaged 12 yards per carry.

Crest’s losses were to neighbors Shelby and Burns.

Carson hasn’t won a playoff game since 2010 and has lost its last five playoff adventures. It will be front-page news — the news front, not the sports front — if that drought ends Friday.

Most are picking Davie to win despite the seeds and records, and despite Davie’s road trip of more than two hours.

Davie and Asheville have never played, mostly because Asheville has traditionally been a 3A school. Asheville joined the 4A ranks with this realignment, although it has 2,000 fewer students than some of the massive Charlotte schools.

Davie’s Alex Summers has thrown for 2,638 yards and 26 touchdowns, while Tate Carney has rushed for 1,104 yards and 18 touchdowns.

The War Eagles, who took four drubbings in the tough Central Piedmont Conference, have scored 41 points per game, but they’ve given up almost as many.

Asheville lost to 1A Robbinsville and Kings Mountain to begin the season, but it has won its last eight and was a conference champion.

Quarterback Khalil Conley has thrown for 19 touchdowns, with only three interceptions, for Asheville.

Asheville is the anti-Davie. The Cougars allow 10.5 points per game, so something has to give.