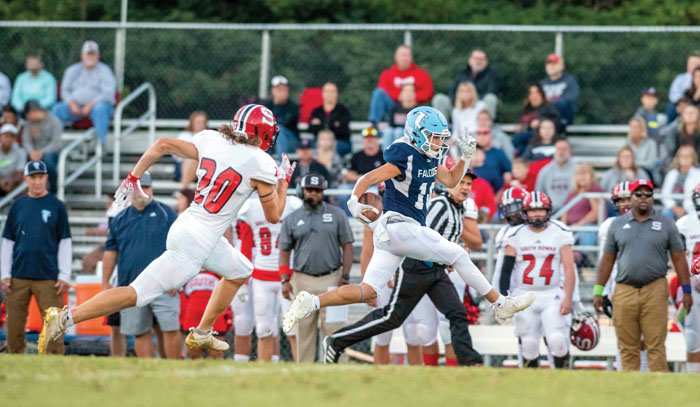 West Rowan senior Garrett Fesperman looked the ball all the way in to his hands and wasn’t distracted. He made the reception for his sixth touchdown of the fall and the Falcons (6-3) were headed for a 40-7 victory to close the regular season.

“I could tell the defender had mis-timed it a little, had jumped a little bit early,” Fesperman said. “He got higher and closer to the ball than I expected, but I still made the catch.”

West head coach Louis Kraft votes for Fesperman as the county’s most improved player. He was on the field as a junior for a handful of catches for a handful of yards, but he’s made a terrific jump as a senior. He’s been a force in a lot of wins this season. He has 32 catches for 575 yards.

West graduated all-county receivers Damon Phillippe and Andrew Kennerly last spring. Peter Williams-Simpson and Fesperman have been able to replace them as the primary targets for Loeblein.

Williams-Simpson you have heard about. He’s been special — 39 catches for 885 yards and 10 touchdowns. Fesperman may still be under the radar somewhat.

“He’s been sneaky about it,” Kraft said. “You don’t realize he’s getting the catches and the yards that he has. He’s been really productive. He’s turned into one heck of a No. 2 receiver.”

Fesperman was a jayvee fullback as a freshman.

As a sophomore, his long-snapping ability earned him a role on the varsity.

He became a receiver, albeit a quiet one as a junior.

“He slimmed down, lost a lot of weight and he toned up to make that transition to receiver,” Kraft said. “H’s a smart kid who understands situations. You only have to tell him how to do something once, and he goes out and does it.”

Fesperman knew over the summer that his responsibilities and opportunities might be different as a senior. Kennerly and Phillippe had combined for 52 catches for 1,073 yards and 11 touchdowns in the eight-game COVID-delayed season. They left a void. Someone had to step into those cleats.

“We had two really good seniors and they were just a lot better than I was last year,” Fesperman said. “But I spent a lot of time last summer working with Noah. We got our timing down and developed our chemistry. It’s made a difference. I haven’t been completely surprised by what’s happened this season. I always had confidence in myself that if I got the targets and the opportunities that I could help the team.”

West’s third game of the season was at North Rowan and turned out to be one of the more exciting games of the regular season as well as the Falcons’ first victory. That was the breakout game for Fesperman, who had five catches for 103 yards and a key touchdown.

“That’s where it started to click for me,” Fesperman said.

In the South Rowan game, the Raiders double-teamed Williams-Simpson and took him out of it. That night Fesperman was the go-to receiver for Loeblein and came through with six catches for 153 yards and a touchdown. He did everything right.

“He does a great job of looking balls in with his eyes,” Kraft said. “Everyone talks about hands, but the eyes are just as important for a receiver. He also showed in that game that he’s got some shake to him. He can run and he can make people miss.”

The other memorable game for Fesperman was the Central Cabarrus game on West’s Senior Night. Loeblein’s fifth touchdown pass of that game tied school and county records. His sixth TD pass broke those marks. Those last two touchdowns were grabbed by Fesperman.

“That was special being able to catch the record-tying and record-breaking touchdowns for Noah,” Fesperman said. “We’ve been best friends since I met him in middle school and it meant a lot to me to be part of those records.”

West will count on Loeblein and Williams-Simpson for more big plays when the Falcons travel to North Lincoln on Friday for a tossup playoff game.

“Fesperman is one of those kids that make you feel good about the program,” Kraft said. “To see where he was a few years ago and to see where he is now as a senior, it’s really cool when a player develops the way that he has.”